Real estate and the lack of affordable housing in Metro Vancouver have been hot topics over the past few weeks, and the discussion doesn’t seem to be slowing down.

A report from Vancity Credit Union states that many people in Vancouver are stuck in starter homes and condos, since the leap to upgrade is too great.

For many Millennials who already own a one-bedroom apartment or condo, they’d have to take on an additional 95 per cent more debt in order to upgrade to a three bedroom home with a yard.

The study points out that most apartments and condominiums aren’t suitable for growing families, but they’re the most affordable options. Of the 212,668 apartments sold in the Metro area last year, 91 per cent were two bedrooms or less.

Of the nearly 700,000 total homes sold in Metro Vancouver, only 1.7 per cent were three bedroom condos.

“I think Vancouver has been in a very tough spot for affordability for a long time and I think people have been innovative and have learned how to cope in this market,” Vancity Credit Union’s Andy Broderick told Vancity Buzz.

“It hasn’t come on us in a year or two, it’s been coming a long time, so changing the trends and being able to come up with more overt strategies to reduce some of the bad implications this market has will take some time.”

Part of the problem is limited land in Metro Vancouver, and the report predicts that by 2030, the average home will be unattainable for the majority of Vancouverites. Condominiums seem to the the only viable option to own property; 75 per cent of the 27,000 homes currently under construction in Metro Vancouver are apartments.

Detached homes are simply out of reach for the majority of people in the market.

The following figures of what the average Millennial couple can afford offer some pretty dismal insights into the problem of housing affordability: 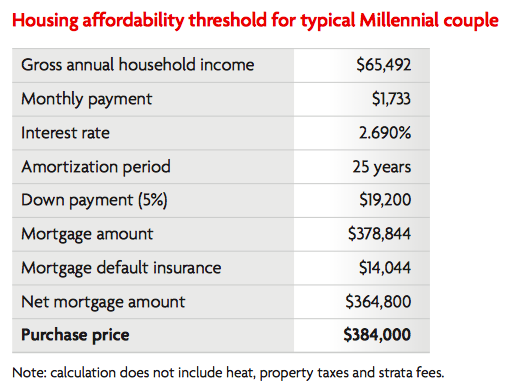 With a five per cent down payment, the average young couple still won’t be able to afford an apartment at the benchmark price for condos in Metro Vancouver, which is $405,400.

Broderick believes changing the state of housing affordability in the city needs to start with government policy.

“You do see signs of hope. It’s become a much bigger issue of focus for policy makers and it’s been elevated by the City of Vancouver and others as a significant challenge that the city is really trying to take responsibility for,” he said.

“The solutions aren’t there yet, but I think that we need more reports like this one that will lay out specifically what the problems are that need to be solved.”

Over the next six to 12 months, Broderick thinks we will start seeing policies and efforts introduced by the government, crown corporations, and large non-profits to start to ameliorate the problem.

He thinks we might be able to learn a thing or two from other cities in North America.

“San Francisco has done some amazing work around inclusionary zoning and around tying the license to development with a requirement to provide affordable units and meet the market needs that have been identified,” said Broderick.

Another option might be to promote more co-op spaces. Municipalities could enable third-party agencies to administer affordable housing programs.