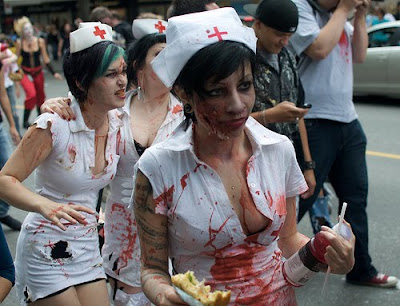 Image: John Biehler
I remember strolling the streets of Vancouver last summer and somehow being caught in a horde of people claiming to be Zombies. At first I thought it was some sort of movie or television production being shot. It wasn’t. Then I thought there may be a Rob Zombie concert in town. There wasn’t. Wondering what the eff was going on I did some research (google) and turns out it was the annual Zombie Walk. The looks on tourists and Vancouverites faces was priceless. Tomorrow, once again the walking dead will take to the streets of Vancouver, you’ve been warned Vancouverites!

If you are interested in pretending to be the walking dead here is what you need to know:

Meet at 2 PM at the Art Gallery downtown, the walk will commence at 3 PM

The Zombie walk will loop around the Art Gallery, then turn down Robson, continuing to Denman, turning left on Denman and continuing on towards the beach, then taking a right at Davie, ending in the beach park along the seawall, where the Zombies can decompress, decompose, and continue to frolic … and of course, TAKE LOTS OF PICTURES!