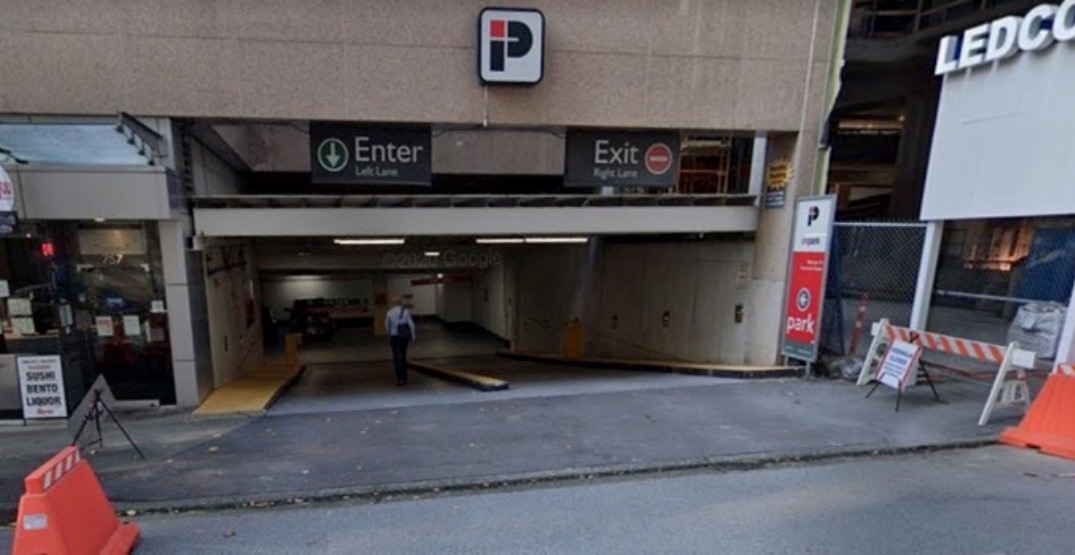 A Vancouver woman is chronicling her unfortunate parking lot saga that had her ordered to pay cash in order to have her car released.

Casey-Jo Loos, a broadcaster at the World Famous CFOX, calls the parkade a scam and is urging people not to park there.

The incident took place on Friday the 13th.

This also transpired not long after the Vancouver Police Department revealed that sexual assaults were on the rise in the Granville Entertainment District, not far from the parkade in question.

“I was lucky that I had someone to call that cared,” Loos told Daily Hive, adding that she had finished her shift just before 10 pm.

“I actually left the station early because I was a bit hesitant to park somewhere I had never parked before.”

The signage suggested that the parking lot closed at 11 pm, and Loos points out that it was 9:50 pm when she got back to the lot.

“I thought I was losing my mind. There was another sign that said to call GardaWorld for after-hours access, and that a “service charge will be applied.'”

While the parking lot is owned by Impark, it is managed by GardaWorld after hours, a private security firm.

“When I called the number, a GardaWorld employee told me that they could absolutely help me, but I’d have to pay a $60 cash-in-hand fee for the help.”

Loos points out that when she asked why the gate was closed before 10 pm when it’s advertised as being open till 11 pm, GardaWorld had simply told her “these things happen.”

That didn’t provide much relief for Loos.

don’t ever park at vancouver house impark parkade at 777 seymour st in vancouver, it’s a scam. parkade closes at 11pm but i got here at 9:50pm to be told i could pay $60 cash in hand to get my car out or it’s trapped all weekend. ty @jodyvance for keeping me safe on the phone. pic.twitter.com/GbnJFToe2N

In a statement to Daily Hive, GardaWorld says they have no involvement in the closing and opening hours of the parkade.

“We have the mandate from Impark to assist someone to get out of the facility when it is closed by opening the gate for a fee,” GardaWorld said in an email.

According to GardaWorld, the cost covers the security officer’s time, as well as the vehicle associated with this kind of call.

“As this is not happening often, we do not have handheld payment devices in our mobile unit… so cash was required.”

A spokesperson for Impark also provided a statement to Daily Hive.

“We worked directly with the customer to address the situation and are grateful it was brought to our attention.”

“Where is the accountability?” asks Loos. “How will you provide clear communication in regards to your actual hours, safe parking services, and accept responsibility for this on-going scam-like behaviour? What is going to change? How has this gone on for so long?”

Loos’ story received a lot of attention on social media.

Vancouver Councillor Sarah Kirby-Yung chimed in saying, “I’m sorry this happened to you Casey-Jo. It’s not just unacceptable customer service, but contributes to women potentially being in situations that are unsafe.”

“A random car came out of the parkade, and I ran underneath the gate before it closed, got into my car, and drove out.”