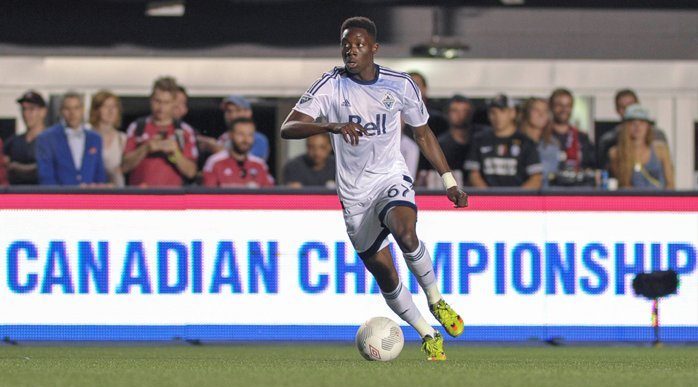 The Vancouver Whitecaps announced another addition to their MLS roster today, signing 15-year-old Alphonso Davies to a contract through 2018 with options for 2019 and 2020.

At 15 years and 256 days Davies has become the youngest active player in the league and the third youngest to sign an MLS contract in league history. He is also the first WFC2 player to come through the system and sign with the first team.

Davies joined the Whitecaps Residency program in August of 2015 after playing for youth clubs in Edmonton.

The Liberia-born player signed a “Homegrown Contract”, which allows MLS teams to sign local players from their own development academies directly to their first team rosters. Players signed on Homegrown Contracts do not count against the salary cap budget if they take up supplemental roster slots.

The young midfielder has already seen action with the Whitecaps first team through his appearances in all four matches of the recent Amway Canadian Championship where he showed glimpses of his talent, shrewd decision making, and maturity beyond his years.

Alphonso Davies: the big summer striker signing we were waiting for? #AbsurdOverhyping #VWFC

“Alphonso is a bright young player who has earned this opportunity,” said Whitecaps FC head coach Carl Robinson. “He still has a lot of hard work ahead of him, but at this point in time we felt this was the best move for his development and for the club. This is another great example of our player pathway and we hope he will be the first of many WFC2 players to make the next step.”

With Kekuta Manneh sidelined due to injury until at least the fall, the signing provides Carl Robinson with options to continue playing with speed down the flanks.

“This is a dream come true,” said Davies. “I’ve grown so much since joining the Residency program last year, and have continued to learn from the first-team players and coaching staff. Coming to Vancouver was the best decision of my life. I’m so thankful to the club for having faith in me and I can’t wait to get started in MLS.”

Davies is also a promising player for the Canadian Men’s National Team program as he has already represented Canada at the U-15, U-18 and U-20 levels.