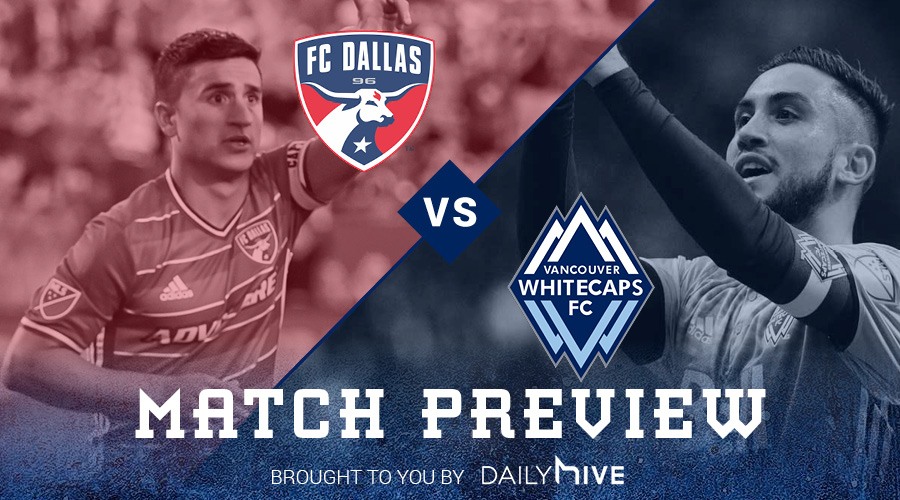 You know a road trip is rough when the halfway point is another scorching date in Texas and there are worse matches ahead. Vancouver Whitecaps FC’s summer of pain continues in Frisco, where a dominant FC Dallas side awaits.

Can the ‘Caps build on a 0-0 draw in Houston and perhaps snatch a point before CONCACAF Champions League begins?

Last week, Vancouver bagged its first ever point in the state of Texas with a 0-0 draw against the Houston Dynamo.

Let that sink in. In the entirety of the Whitecaps’ MLS existence, the best result they have ever achieved against Dallas or Houston is a 0-0 draw.

One should not exactly be fist-pumping at the achievement, significant as it may be. FC Dallas is not Houston. Heck, Houston isn’t even the Houston of old, at least not the one that went to back-to-back MLS Cup finals against the LA Galaxy in 2011 and 2012.

The key thing to keep in mind for this trip to Frisco is that in the most desirable of circumstances – low-ranked team, head coach turmoil, anemic offence – the ‘Caps managed a 0-0 draw.

If the Blue and White want to see a similar or, dare we dream, better result this weekend, they will need to be multiple magnitudes better than the were last week across the board.

Containing playmaking wizard Mauro Diaz will require a full team defensive effort, since the 25-year-old Argentine has made a habit of doing absurdly amazing things to spur his team on.

Matias Laba will have to be sharper than he’s been all season, as will whoever lines up beside/behind our designated midfield destroyer.

In short, Vancouver needs to treat this Dallas match with bucket loads of respect and caution. Keep it slow and steady in possession, stifle any Dallas attacks with smothering pressure and pick counter-attacking opportunities carefully to avoid tiring out in the Texas heat.

Head coach Carl Robinson and his coaching staff are prepping for their second tour of CONCACAF Champions League (CCL), which kicks off on Tuesday in the Caribbean. Fun fact: the Caribbean is a hot place with not totally terrible players.

The T&T skipper was named to… https://t.co/pSmXtkPGQ3

I don’t envy the ‘Caps, who will go from sweating in Dallas to sweating in Couva. One would expect that a sizeable number of depth players will be seeing the pitch on Tuesday. The question is, how sizeable is that number?

There were accusations last year that the squads deployed for CCL matches were sub-par, even by “B” squad standards. When combined with the fact that Vancouver will not be at next year’s competition, it’s not outlandish to expect that more than a few first-team players will be sprinkled in to try and grab as many points as possible.

The trade-off of that, though, is limiting said first-teamers’ minutes in Major League Soccer. So, who sits? Does captain Pedro Morales’ minutes get severely curtailed to allow him to direct traffic? Will winger Christian Bolaños sit one match to take over the other? Is Dallas where David Edgar makes his league debut to keep Kendall Waston fresh for a Caribbean contest?

If it were up to me, I’d be fielding an ultra-defensive 4-4-1-1 formation against Dallas to try and make the most of the Trinidad & Tobago trip with fresh attacking bodies. Whether Robbo agrees remains to be seen.

Fabian Castillo, is on his way out of Dallas.

While the move isn’t official, Castillo was given a rapturous welcome in Turkey by eager Trabzonspor fans earlier this week, which is about as almost-pretty-much-just-count-it-official as you can get. Being carried on the shoulders of supporters is kind of a dead giveaway.

For Vancouver, that’s nothing short of a summer miracle. Trying to contain Diaz is difficult enough. Containing Diaz and Castillo? Good luck. No Fabian means no lethal combination play from Dallas, in theory.

There’s still the matter of doing something in the absence of such a dominant force. As I said earlier, my preference would be a 4-4-1-1 to smother the midfielder. This would be an ideal time to test out Marcel de Jong at left midfield, assuming he’s match fit, to form a crushing tandem with left fullback Jordan Harvey.

Will that happen? Unlikely. We’re more likely to see Pedro Morales out left for maybe an hour, tops, with Andrew Jacobson slotting next to Matias Laba in midfield.

A guy can dream, though.

2-0 Dallas. There’s a reason FC Dallas are scrapping it out with the Colorado Rapids for top spot in the Western Conference. In short, they’re good. Like, really, really good. Good teams at home, especially those with distinct home field advantages (e.g. suffocating heat), make their opponents pay. Vancouver’s defence has not yet proven to me that they can overcome those obstacles like they did last year. Factor in some substitutions in advance of Wednesday’s CCL match and it’s going to be a rough ride in Texas on Sunday.