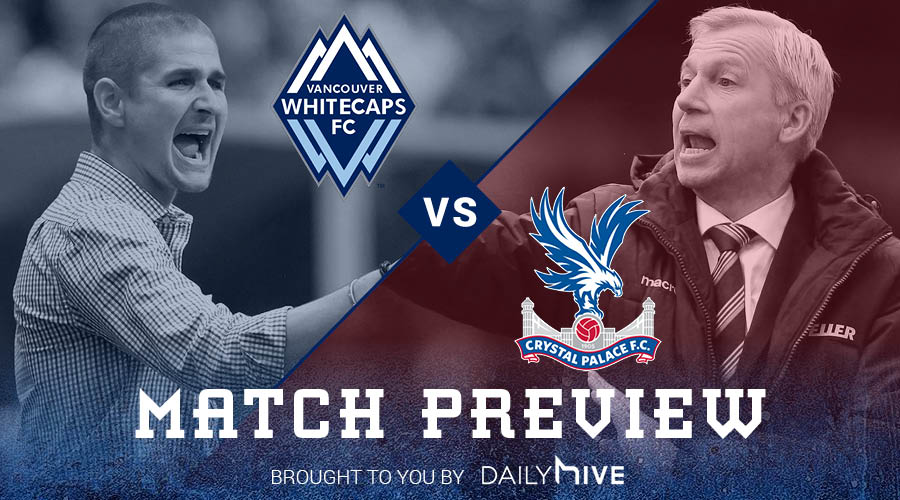 Tonight the Vancouver Whitecaps welcome the English Premier League’s Crystal Palace FC to BC Place for a friendly between the two clubs.

Vancouver is the third and final stop on Palace’s North American summer tour. Last week Palace made stops in Philadelphia (0-0 draw) and Cincinnati (2-0 win) as part of their preparations for the new Premier League season that begins on August 13th.

Let’s take a look at who the ‘Caps are up against tonight.

Crystal Palace FC was formed 1905, and played at the famous building of the same name that was located in Hyde Park in western London. The young club was forced out of their home when the Admiralty took over Crystal Palace during World War I. For the next decade Palace was forced to play at several different grounds and finally moved into their current home at Selhurt Park in 1924.

They were initially denied entry into the Football League, and started out in the 2nd Division of the Southern League (currently the Evo-Stick League Southern). Palace was finally accepted into the Football League in 1920 and were champions of the newly created Third Division in 1920-21. The Eagles have won the Second Division twice, and finished third in the old English First Division (now the Premier League) in 1990-91.

This past year Crystal Palace went on an epic run in the FA Cup, but had their hearts broken when Manchester United’s Jesse Lingard scored in extra time to give the Red Devils a 2-1 victory. In the league Palace didn’t fare quite as well, finishing 15th out of 20 teams.

Here is a quick video that hits all the high points on Crystal Palace’s 111-year history:

Two names on the current roster that you may recognize include midfielders Yohan Cabaye and Wilfried Zaha. Cabaye joined the Eagles last year, and has just returned to the club after representing France at the recent European Championships. Zaha won’t play in Vancouver tonight after picking up an injury in Cincinnati on the weekend.

English soccer fans may also be familiar with defender Andros Townsend. The 25-year-old joined Palace earlier this summer after playing at Newcastle United and Tottenham Hotspur. Townsend made his debut for the Eagles in the nil-all draw against the Philadelphia Union last week.

Yannick Bolasie could also see action tonight (more on him in a little bit).

Crystal Palace is in the middle of their preseason. As much as this is a chance to grow their brand out side of England, head coach Alan Pardew is still preparing for the new season. So with that in mind, don’t expect to see all of their star players tonight.

The Whitecaps have White is the Colour as the official team song, while Palace’s is called Glad All Over.

Crystal Palace were recently reported to be interested in Portland’s Fanendo Adi. Adi is the one who scored a goal and added an assist when the Timbers knocked the Whitecaps out of the MLS Cup playoffs last year.

As enjoyable as it will be to watch Crystal Palace’s stars play the Whitecaps, it will be even better if they take the heartbreaker Adi back to England with them. It also gave me a good reason to include a picture of Fanendo Adi holding a chainsaw during a match. ‘Nuff said.

There are a couple more connections between the Whitecaps and Crystal Palace. Former Whitecap Nigel Reo-Coker, who grew up in South London, was rumoured to be making a move to Selhurst Park last year.

Reo-Coker also played for Palace manager Alan Pardew back in the day at West Ham United. Pardew even made Reo-Coker the captain.

The English Premier League is the best league in the world, and home to some of soccer’s biggest talents. There are plenty of amazing highlights each and every week.

Perhaps one of the most memorable moves in recent times was Palace winger Yannick Bolasie’s ‘flick’ on Tottenham’s Christian Eriksen. Words can’t express how cool this is, so check it out and enjoy!