For the past several years, the City of Vancouver has been exploring whether the Georgia and Dunsmuir viaducts can be replaced with a ground-level street network. According to findings from the City, replacing the viaducts would open up many opportunities including a larger Creekside Park; improved walking, cycling, transit, and driving options; better connections through neighbourhoods; and new space for affordable housing and community amenities.

What were the viaducts originally designed for?

The Georgia Viaduct was originally built in 1915 to bypass the tidal waters, rail lines, and industrial land was in Northeast False Creek at the time. In the early 1970s, the Georgia Viaduct was replaced and twinned with the Dunsmuir Viaduct. The viaducts were meant to be the first piece of a proposed freeway system that was planned but never built. Since then, land use around these structures has changed a lot.

Why is now an opportune time to consider removing the viaducts?

There’s a window of opportunity to establish a new, safer, and more connected street network in Northeast False Creek before the area is developed and the aging viaducts need expensive repairs.

Originally, the viaducts were intended to connect downtown Vancouver to other neighbourhoods, but with the way the city has grown and changed they’ve become more of a barrier than a connector. They cut off the surrounding neighbourhoods from the False Creek waterfront, downtown and each other. They’re also expensive to maintain and wouldn’t withstand a major earthquake.

What would take the place of the viaducts if they were removed?

If the viaducts were removed, a new road network would take its place at the street level, including a two-way Pacific Boulevard and a new Georgia Street Ramp. The new Georgia Street Ramp and Dunsmuir Connection would provide direct access from downtown to Northeast False Creek for all transportation modes. A new two-way Pacific Boulevard would directly connect Strathcona and the False Creek Flats.

As mentioned, these ground level streets would allow neighbourhoods to connect more directly. Additionally, the viaducts aren’t currently used by emergency vehicles because of the vulnerability of getting trapped on them if there is traffic – a street level network creates a multitude of options for continuing to move if there are blockages at one point in the road network.

You can see more detailed descriptions and diagrams of the possible changes at vancouver.ca/viaducts.

How will replacing the viaducts affect traffic?

Our research has also shown us that over the past 15-20 years there has been about 20 per cent less vehicle traffic on all routes to and from downtown Vancouver. More people are choosing to take transit, cycle or walk.

So we’ve tested the proposed network for over four years and it our findings show that this proposed new street network can accommodate 100 per cent of today’s traffic and actually performs better in the future as compared to today’s network. There would be a small increase in travel time (one to three minutes depending on the route) with the new connections to and from downtown. No overall increases in vehicle volumes are expected in the surrounding neighbourhoods.

The testing was done by professional transportation engineers using internationally accepted computer modelling techniques. The tests were validated by collecting an extensive amount of traffic volume data to measure real conditions and driver behaviour in Northeast False Creek and the wider street network in Vancouver.

Compared to the current system, the new network would give everyone more choices in routes and a new direct connection from downtown to Northeast False Creek.

How will the viaduct removal project contribute to the City of Vancouver’s pedestrian and cyclist-friendly goals?

From what we’ve studied, the new network would provide much better route options through this area for pedestrians, cyclists, and transit riders. These new streets will be safer and more comfortable for pedestrians and cyclists, compared to the viaducts.

Can we expect any new “unique” spaces that will set this area apart from the rest of False Creek and how will it be incorporated with the stadium entertainment district?

If Council approves the replacement of the Georgia and Dunsmuir Viaducts this fall, there are a lot of new opportunities to explore in detail. Much of the details would be worked out through further stakeholder consultation and community outreach as part of a planning process.

We could build an extension to Creekside Park that’s bigger, better, and more connected. It would be a great addition to Vancouver’s dense core. This kind of park land would be prohibitively expensive if we were to try to purchase it. The new park would be a distinct addition to downtown and a place for neighbours and people from all over the city to enjoy. It would extend from a new ‘Entertainment District’ anchoring the foot of West Georgia Street to the False Creek waterfront with a new pier and plaza space, to the existing Creekside Park by Science World.

The new network would also open up new opportunities to build affordable housing and create space for jobs close to transit and amenities.

This new neighbourhood is being explored as a potential new addition to the entertainment district, growing from the stadiums. Potentially, the proposed Georgia Street Ramp would extend straight to the waterfront and improve the connections and experience between the stadium and arena and the neighbouring areas with new restaurants, shops, and event spaces.

We could also keep a small part of the existing Dunsmuir viaduct and turn it into an elevated park, a bit like the Highline in New York. It would provide a new public space and direct connection to the downtown for pedestrians and cyclists. Main Street would also be reconnected with new local business and shops.

There are a lot of possibilities – and if Council does choose to replace the viaducts, we look forward to exploring the opportunities in consultation with the public.

A report on the future of the viaducts will be presented to Vancouver City Council in October 2015. For more details: vancouver.ca/viaducts

You can also join Holly Sovdi, the lead planner for the viaducts project and Devan Fitch, the lead engineer, at a Reddit AMA on the viaducts on October 13 from 12-1pm – head to Reddit Vancouver at that date and time to ask your questions! 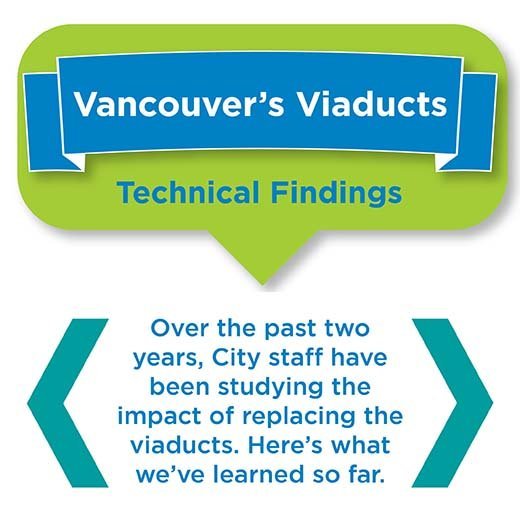