The City of Vancouver is currently holding a series of open houses on the Viaduct Study. The open houses are there to inform and allow residents to voice their opinions. Ultimately many believe their voice means very little as the the removal of viaducts is going to happen regardless. Removing the viaducts is a good idea from a purely aesthetic and neighbourhood viewpoint. However, at the present time removal doesn’t make much economic sense as the cost of removal far is at minimum 10x the cost of keeping/maintaining them.

We took a look at the City of Vancouver’s plans for the the viaducts and have highlighted the key points.

The Main Reason The Viaducts Are Being Removed and Some VcB Counterpoints.

Lets forget for a moment that the viaducts are a personal pet project of Vision Vancouver councilor Geoff Meggs and look at some of the reason the city wants to remove the viaducts. The main reason that is heard over and over again is that the viaducts act as a physical and psychological barrier for residents of Chinatown, Gastown, Strathcona, DTES and False Creek. The viaducts, when combined with the Skytrain guideway, and Expo and Pacific Boulevards create a significant barrier. The space between and beneath the viaducts is largely inaccessible and vastly underutilized.

Now of course they act as physical barriers, however, the reason they create psychological barriers is that there is absolutely NOTHING there. The majority of the area is fenced off or a giant parking lot. Why would anyone in their right mind want to go near that land under its current configuration. Furthermore, even if the viaducts are removed, one physical barrier will remain, the Skytrain guideway. Unless the city gets Translink to miraculously stumble upon mounds of cash to shove that guideway underground, that barrier will remain. If the city can work around the guideway, why not the viaducts? We presented 5 options for the keeping the viaducts.

Currently the viaducts begin/terminate at Gore Avenue in Chinatown, relegating the land in Chinatown south to a quasi parkland. This parkland could be better utilized even in its current configuration but presently it is an afterthought for the City of Vancouver. Like most smaller parks in Vancouver, it’s just a large patch of grass with some shrubs.

On the downtown side, they begin/terminate at Beatty Street and are integrated with the Spectrum towers on both the Georgia and Dunsmuir sides.

Evaluating the usefulness of the viaducts right now does make sense as the land surrounding is set to be developed in the next five to ten years (See Concord Pacific Plans and the new park planned for the area) and developers need to know if the viaducts will remain or not. Furthermore a look at the map below indicates that the city owned land in Chinatown south can be sold off to developers to recuperate some of the costs to remove the viaducts. 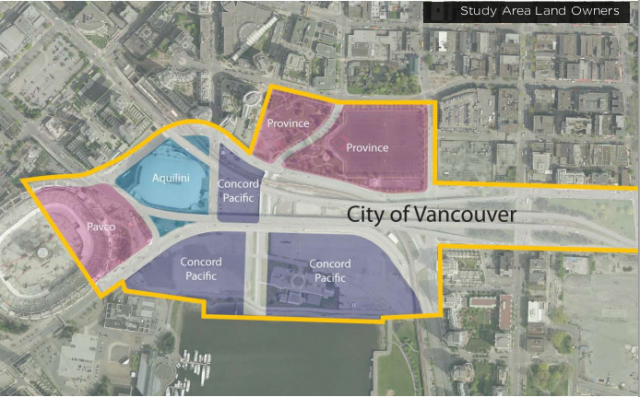 Proposed Concept (Not Yet a Plan)

Here is a concept of what the neighbourhood would look like without the Viaducts.  From the City of Vancouver: 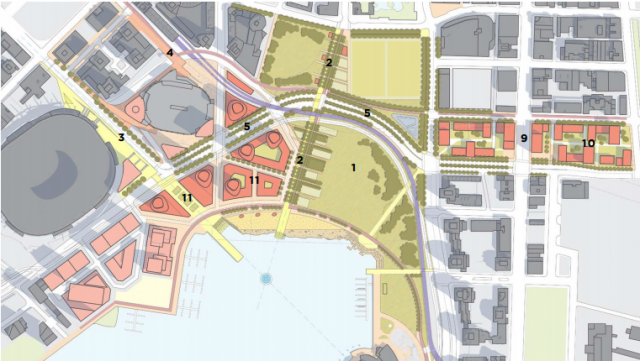 2.  ‘Straight to the Creek’: A pedestrian/Cycling Spine at the south end of the Carrall Street Greenway is re-aligned to better connect the historic communities to False Creek and provide rich programming opportunities.

3. Georgia Street: From ‘Water-to-Water’ the Georgia Viaduct is replaced with a pedestrian and bike friendly street that ramps down to Pacific opening to wonderful waterfront views.

4. A taste of the ‘High-Line’: Dunsmuir remnant as Viaducts plaza part of the Dunsmuir Viaduct is retained as an unique elevated public space that facilitates key pedestrian and cyclist connections. A nod to NYC’s High-Line Park, which so many Vancouverites want to see here.

5. Pacific Boulevard: a ‘Great Street’ Pacific is combined with Expo to create a ‘new Pacific’ with multiple rows of trees, sidewalks, bike lanes and space for a future streetcar.

6. Reconnect Communities: Improve linkages to the creek & each other the new park configuration, pedestrian and cyclist pathways, and improvement of the street system facilitate movement between communities and the waterfront.

7. Enhanced Pedestrian & Cyclist Linkages: The Dunsmuir bike lane is replaced with a new bike bridge that connects downtown to Adanac route, ‘strait to the creek’ and seawall. Overall pedestrian and cyclist connections north-south and east-west through the area are significantly improved.

8. Celebrate the site’s many histories. From tracings of the natural shorelines and industrial pasts; to recognition of the diverse cultures that have shaped this area of the city; to the role that community played in halting the freeway, thereby laying the foundation for Vancouver’s highly celebrated livability.

9. Restore Main Street Corridor: The current gap in the urban fabric due to viaduct on/off ramps is replaced with commercial frontage and landscaped plazas.

10. Reviving the public life & feel of Hogan’s alley. The historic community of Hogan’s Alley is restored and a public pedestrian connection through laneways is introduced to connect Strathcona to the waterfront.

11. Enhancing a Vibrant Celebration District a major plaza at the end of Georgia street combined with animated uses supports a vibrant urban waterfront.

12. An efficient Street network: connecting Georgia to new Pacific to Prior/Venables preserves essential east-west capacity in and out of the downtown as well as goods movement routing.

The idea of  a new major urban park is a great one, especially for the folks living in the eastern portion of downtown and in East Vancouver. Again, could this not be made with the viaducts in place? Regardless you can see plans for a new beach, plaza and possibly a community centre as part of the plan. 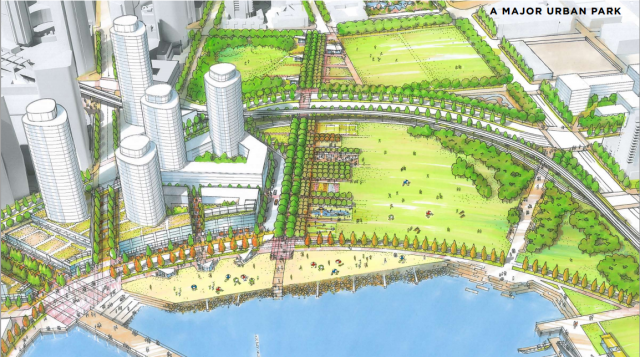 For those of you unfamiliar with Hogan’s Alley (the Vancouver neighbourhood, not the classic NES game), it was the only predominantly black neighbourhood in Vancouver. In fact Jimi Hendrix’s grandmother used to live there and Jimi Hendrix Shrine remains there to this day. The neighbourhood was subsequently destroyed when the viaducts were constructed. This land is currently owned by the city and selling it to developers will help offset the costs of the viaduct removal and parks/roads creation.

What Will Happen to All the Traffic?

The city insists that the parallel routes (Cordova, Hastings, Pender, Powell, etc.) are viable alternatives for vehicles travelling through east-west routes bounded by False Creek and Burrard Inlet. Hastings has the greatest potential take some of the capacity, however the standard 50km/h speed limit has to be reinstated for it to work.

The city also assumes that even if no one was to shift to transit or alternate routes outside, the maximum potential vehicle diversion can be accommodated on existing street network.

We’ll know soon what the fate of the viaducts is. Either way the announcement will be historic and will shape the future of the Eastern Core.