It’s a Monday morning, the sun is shining and the spring birds are chirping, but walking down Georgia Street during the morning commute you don’t see many smiles. If you’ve lived here all your life, you may be surprised to learn that this is not the norm – Vancouver is in fact the least happy city in Canada.

In a survey released this week, Statistics Canada revealed that of 33 census metropolitan areas in Canada, Vancouver ranks the lowest in life satisfaction.

With data collected between 2009 and 2013, Statistics Canada found that life satisfaction in Vancouver is measured at only 7.8 out of 10, while the happiest metropolitan area, Saguenay, Quebec, measures at 8.25. Canada as a whole lands near 7.97. 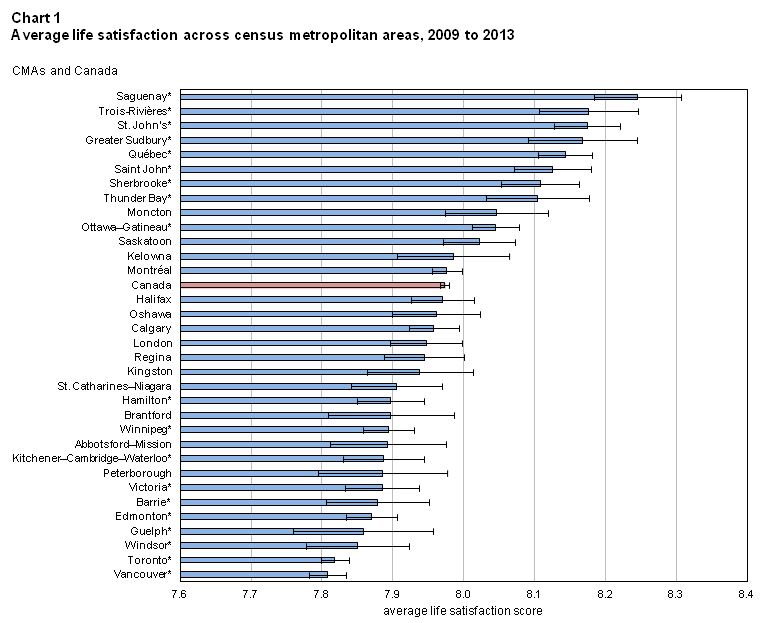 The survey sampled almost 340,000 survey respondents aged 15 or older who reside in one of the 10 provinces. Toronto scored just higher than Vancouver with other Ontario cities making the bottom ten, including Windsor, Guelph and Barrie. Edmonton also scored below 7.9, as did Victoria and Abbotsford-Mission.

The happiest cities were all on the east coast, including Saguenay at the top, followed by Trois-Rivières, St. John’s, Greater Sudbury and Quebec City. The highest scoring B.C. city was Kelowna at 7.98 out of 10, just above the Canada average.

While many have their own reasons to believe Vancouver is the unhappiest city in the country, research has found that “physical characteristics of geographic areas, such as urban size and population density, natural endowments, economic opportunity or deprivation, and access to, and quality of, infrastructure, amenities and services” plays a large part in people’s reported life satisfaction. As well, levels of trust and the quality of social connections in neighbourhoods and workplaces can influence happiness significantly.

According to the findings of a landmark 2012 study by the Vancouver Foundation: