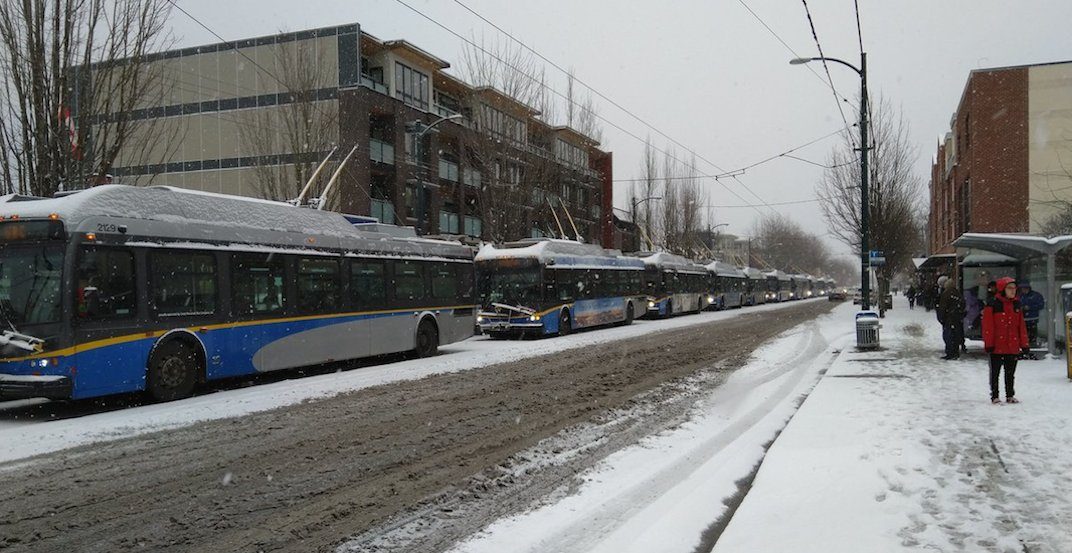 As Metro Vancouver remains under a snowfall warning today, drivers aren’t the only ones struggling with the poor weather conditions.

As transit riders head to work this morning, Translink has announced a number of service disruptions and transit delays due to the inclement weather.

The major snow storm that hit the region over the weekend has created some rough areas that are expected to impact all types of traffic, including transit, this morning.

Despite extensive snow clearing across the region, commuters should expect some delays due to the need for vehicles to travel with caution at slower speeds in many areas.

Good morning! It is snowy & cold out there today. Please give yourself extra time for your commute, dress warmly & in layers. Expo #SkyTrain shuttle between Lougheed & Columbia. #HandyDART is running essential service only today. We’ll do our best to keep you informed 🙂 ^DA

Expo Line operating King George to Waterfront in both directions. Shuttle train between Columbia Station and Lougheed Station due to inclement weather. Customers must transfer at Columbia or Lougheed to continue their journey.

#WCE Service is running normally this morning. Please use caution when entering/exiting the trains due to snowy & potentially slippery conditions on platforms. ^DA

Commuters are encouraged to dress for the elements, wear proper footwear and expect occasional service disruptions throughout the day.

Translink is also reminding riders to plan ahead and give themselves extra travel time. Riders should also check Trip Planner or sign up for transit alerts to be the first to know if there are changes to the transit schedule.