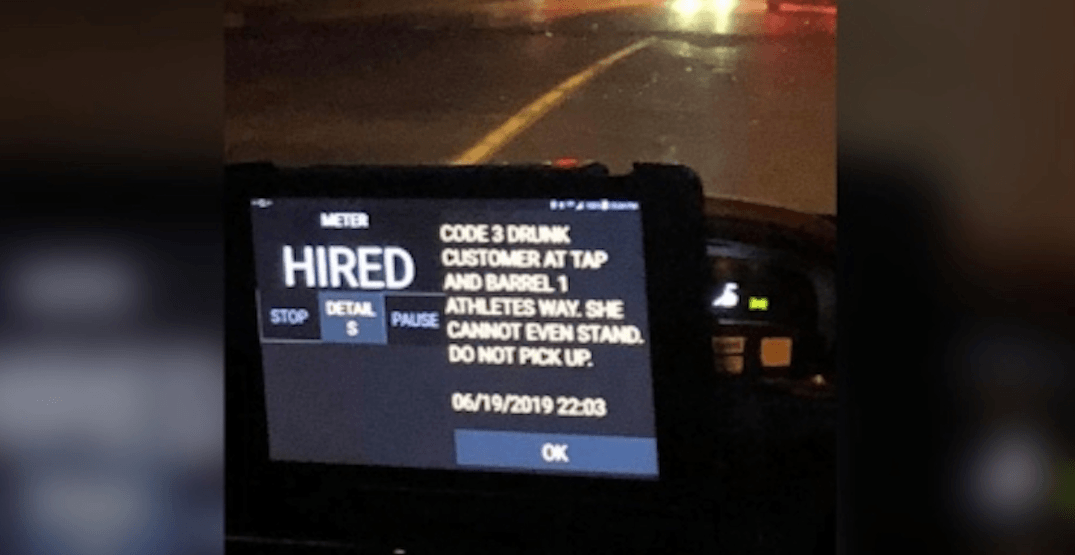 A Vancouver woman is expressing concern about a taxi company’s pick-up policy, after witnessing an instruction from dispatch while in a cab, earlier this week.

On Wednesday night, Arden D’Hont was in a cab operated by Yellow Taxi, on her way home from the Anderson .Paak concert at the PNE.

All of a sudden, she noticed a dispatch instruction appear on the driver’s screen, informing drivers of a drunk customer “who cannot even stand up.”

The message then instructed drivers not to pick her up.

Struck by this message, D’Hont said she shared her concerns with the driver, who reportedly responded by saying that if he did pick the woman up “and she threw up that he wouldn’t be able to work for the rest of the night.”

D’Hont told Daily Hive that while she understands that this would be an inconvenience, she said cab drivers should recognize it is sometimes part of the job.

“Being a cab driver especially later in the evenings you are bound to pick up some intoxicated people,” she said. “Wouldn’t the fact that she is clearly intoxicated make this pick-up a priority? She clearly needed a safe ride home.”

For her part, D’Hont said she’s “personally have never had an issue with getting a cab in order to get home.”

However, she has seen cabs “refuse fares because of the requested drop off location being too far and/or the person being under the influence.”

Situations like these, she said, “show that cabs might not be fulfilling the need for a safe ride home anymore.”

According to the Taxi Bill of Rights, cab drivers have the right to refuse transportation if they believe it will put them in danger, or if they believe a passenger’s health and safety may be at risk.

They may also refuse rides to customers who are “smoking, conducting themselves in a disorderly manner, using profane or offensive language, or are acting in such a manner as to be offensive to the driver or other passengers.”

Reflecting in this latest incident, D’Hont said she would like to know why a cab company would “deny a ride to an intoxicated person, besides the inconvenience.”

And, like many others in BC, she’s also wondering exactly other ridesharing options will be available in the city, and the province.

“It’s just odd that we are the only main city that does not have a rideshare program,” she added.

Daily Hive has reached out to Yellow Cab for comment, but did not hear back by time of publication.