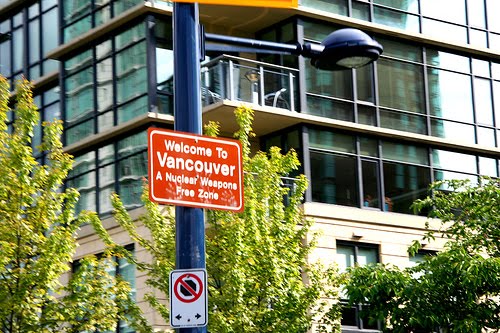 This is probably one of the silliest things I’ve seen in a long time, well in the last few weeks at least, this is Vancouver after all. It looks as though Vancouver East MP Libby Davies (NDP MP of course) is worried about the nuclear free zone signs (seen in photo above) disappearing. Really, you don’t have anything better to do? The whining of the left is getting to be down right trite at this point. Sign or not, I’m pretty sure people around the world know that Vancouver is a nuclear free zone. If a sign is what distinguishes one city or country from say North Korea and Iran then we, the inhabitants of earth got bigger problems.

Furthermore other cities across Metro Vancouver do not have these signs, does that mean Surrey is hoarding nuclear weapons? Come on you kooks in the left need to stick to your priorities, mainly profiting off the backs of the homeless and mentally ill. I kid, I kid, sorta.
I really don’t see what the signs represent? I think the loony left has done some wondrous things for Vancouver, one of which is preventing a highway from literally cutting the city in half. However, this is one thing that’s time has come. These signs do nothing, if a country was to say bomb us, would we then chase after them for $2000 bylaw infraction for not obeying the sign?

Let’s keep one sign as some sort of historic public art initiative and let the rest go in peace.