In May 2014, we got a chance to chat with intrapreneur turned entrepreneur Luke Aulin, co-founder of Vancouver startup RTOWN. Now, one and a half years later, we wanted to check in with him and see what progress the local company has made.

How has your role changed since you started the company two years ago? What’s been the toughest thing you personally had to face?

As an entrepreneur, I would describe myself as a builder. For me it’s about taking the pieces you have at any point in time and maximizing the value out of them along the way. In the beginning of any venture, there are usually very few pieces and a lot of ideas that need to be validated. So I spent my time as an evangelist of the company’s purpose in the early days. I was really focused on “why” RTOWN should exist and “who” we should serve. The products and services were understood conceptually but it evolved from that place first. We’ve also evolved how we’re rolling out the company.

RTOWN is still young and the evangelism work continues but we’re fortunate to have had some ideas validated (while others have needed some massive fine tuning), and I feel very fortunate to have an awesome team that thrives on working in a values-aligned, performance-based culture at RTOWN. My role hasn’t changed that much since the start but the building blocks are more abundant now.

The toughest challenge has been dealing with the high highs and low lows of the entrepreneurial journey. I am so thankful for Grace, my wife, and the friends and family who have put up with the most extreme versions of Luke they’ve ever seen these last years. The sacrifice that comes with starting your own business is real and the emotional journey, in my humble opinion, is an under-discussed topic.

How has your team grown? What’s been the hardest decision you’ve had to make as that’s happened?

We grew to seven RTOWNers in our first year in business and to 15 RTOWNers after our second year in business. We’ve primarily grown through customer acquisition of which we have over 250 businesses subscribing to our services now. Bootstrapping is a very challenging way to grow but has its upsides too.

Growth sucks cash and, knowing this, the hardest decision I’ve had to make was to walk away from a significant investment offer in RTOWN after a clear values violation. The investor broke trust.

For me, an organization is all about its people. In my experience, it’s harder to scale a business when the leadership group has an absence of trust. It was a very hard decision but, in the end, slower has proven better than possibly broken.

RTOWN recently got B Corporation Certified – what does it mean to you? Why was it important to you?

B Corp Certification means that our business has a profit motive in mind but not at the expense of people or planet. It’s important because the world is full of social problems and I think some businesses are in a good position to help solve some of them. B Corp helps us measure our business from a unique perspective that attempts to balance broader interests. It gives RTOWN a benchmark for what “good” looks like.

Beacons – tell us a bit about this technology and how you’ve utilized it.

The RTOWN Loyalty App helps local businesses build their customer list, track the spending of their most loyal customers and provide rewards for being a loyal customer. The studies show that roughly 80% of total sales comes from just 20% of a business’ customers. So a customer retention or loyalty strategy are, therefore, very important for businesses to implement.

Beacons are like near field communication devices. When a user of our app is a loyal customer of an RTOWN subscriber, they can scan their smartphone near a merchant’s beacon and register their purchase on the path toward loyalty rewards from that merchant.

There’s a full list of local businesses inside the RTOWN Loyalty App which can be downloaded for free now on iTunes or Google Play stores. With Christmas spending coming up for everyone, our app can help people save money while also shopping at their favourite local shops.

We’re still in the early days of this technology. Geo-fencing allows you to communicate with a device that enters a target radius of any point on a map that’s been “geo-fenced.” For RTOWN’s customers, it’s their store front usually. Because most smart phones are made location “aware,” merchants can now automatically message a potential customer walking near their store with offers or any kind of message they want to engage potential customers to come in. 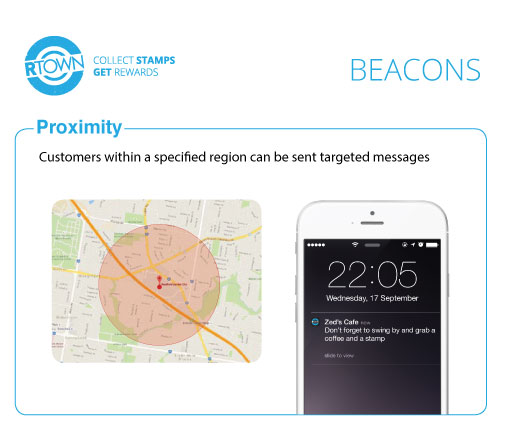 The applications for this are numerous. For example, you can set it up to thank a customer who visited a store upon leaving the geo-fenced area. Perhaps even prompting them for feedback on their experience. The future is a richer relationship between customer and their favourite shops or restaurants and businesses knowing exactly how to delight their customers in the future.

At our second annual retreat, the RTOWNers gathered to work on restating our big hairy audacious goal (to nab a term from Jim Collins). Our mission now is to make every town RTOWN. This has very specific meaning to us internally and, since we’re rolling out RTOWN in new markets like Kamloops, Whistler, the Fraser Valley, and the Okanagan, our goal in 2016 is to have 10 firmly established RTOWN markets to set us on our path to have 100 by 2025. It’s ambitious but we’re all very excited about what’s possible as we become the single most trusted digital brand for local business owners.

What would you tell your 20-year-old self?

Don’t worry so much about the end. Enjoy the journey. Trust yourself more. Oh, and don’t open that taxi door when you get to Hanoi in Vietnam!