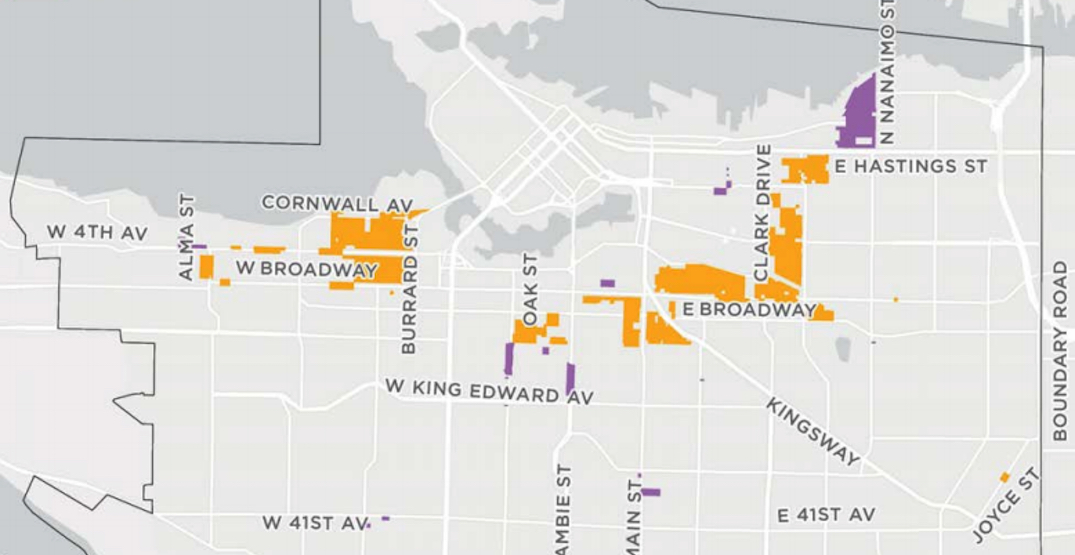 Map of proposed areas where social housing would not require a rezoning application. (City of Vancouver)

Vancouver City Council is set to decide this week on whether the rezoning process for new social housing in select neighbourhoods should be abolished.

Such a policy shift is being considered to expedite the process of building such projects, and lower the construction cost for the non-profit sector and governments.

The changes would be made to RM-3A, RM-4, and RM-4N zones within parts of Kitsilano, Fairview, Mount Pleasant, Grandview-Woodland, and Marpole south of West 70th Avenue.

Buildings up to six storeys (65 ft) with a floor area ratio density of 2.5 would be permitted in these areas, but only if 100% of the residential floor area is dedicated to social housing. There would also be an alternative option to accommodate both social housing and childcare facility to fulfill the requirement.

These areas already allow multi-family buildings up to three or four storeys, but a rezoning would typically be required for additional height and density. 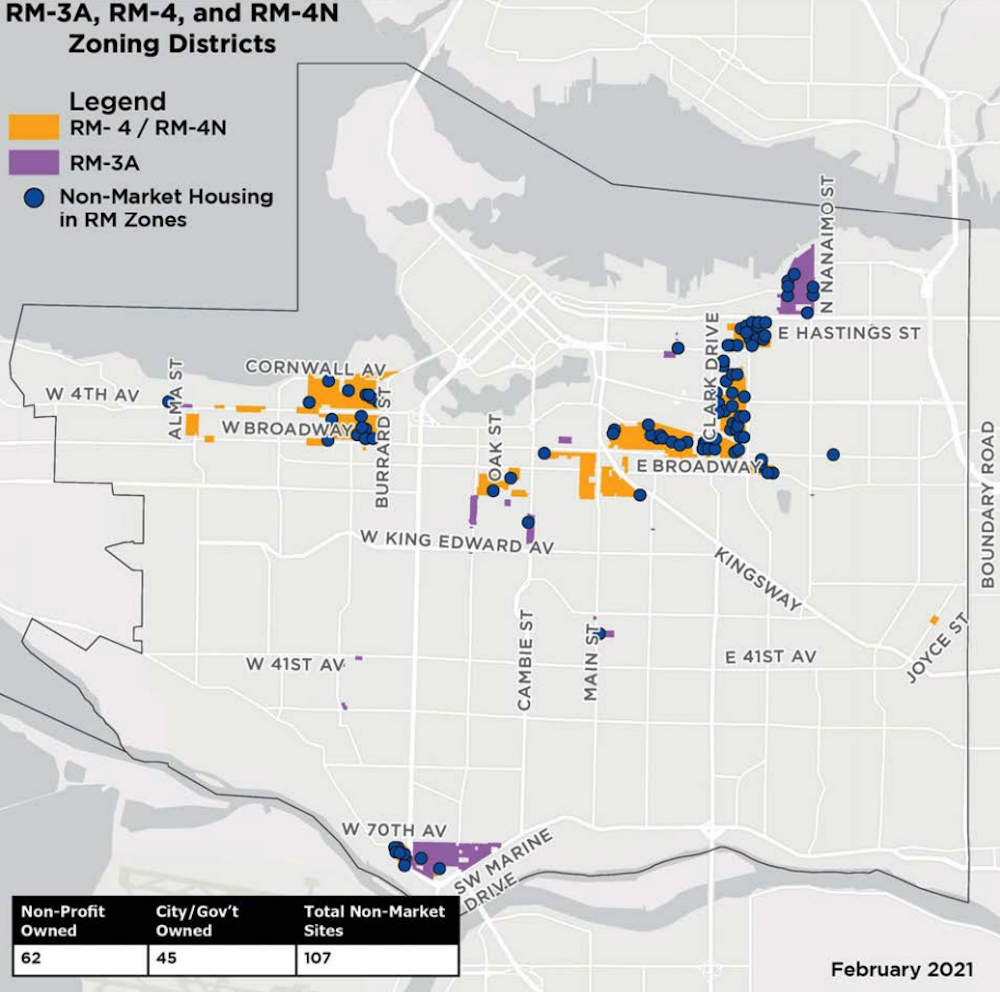 Map of proposed areas where social housing would not require a rezoning application. Existing non-market housing properties are also shown. (City of Vancouver)

Axing the rezoning process would reduce BC Housing-funded project timelines by between nine months and two years, and reduce upfront costs by nearly $400,000.

These changes are being pursued by city staff after consulting with the non-profit and co-op housing sector, and the federal and provincial governments. Housing operators are looking to renew and expand aging properties, but they require significant subsidies to build and operate — even if the land is provided for free or at a nominal cost.

“Non-profits and co-ops have indicated that the rezoning process — required for developments requiring more height and density than what is allowed under existing zoning — adds significant cost, time, complexity, and risk to development applications. Previous Staff analysis has demonstrated that half of recent social housing developments required approval via rezoning, compared to less than a third of market condominium developments,” reads a city staff report.

“Since some senior government programs require approved zoning for eligibility, a rezoning requirement can also lead to delays in accessing senior government funding. This puts non-profits in a position of taking on significant risk and cost to rezone a site, without any commitment of funding to ensure project viability.”

“Since construction of new social housing is extremely costly, even with senior government funding, many new social housing developments rely on mixed-income housing models with a mix of affordability levels including shelter rates, rent geared to income, and a portion of ‘low-end of market’ rate units to help cover the costs,” continues the report.

For recent projects, the low end of senior government contributions is about $50,000 per social housing unit or $1.5 million to $3.5 million for the average six-storey social housing building with at least 30% of the units set at housing income limits (HILs) rents. The upper end for government subsidy is about $150,000 per unit or $5 million to $9 million, with 20% of the units at shelter rate and 50% at HILs.

The areas that are proposed to see the policy changes already contain 62 non-profit or co-op owned housing properties, accounting for about 33% of non-profit and co-op owned sites in Vancouver.

Across the city, there are about 500 social housing properties serving 26,000 existing households, with most of these buildings located in areas that have historically allowed apartment forms with higher density, specifically in the East side. 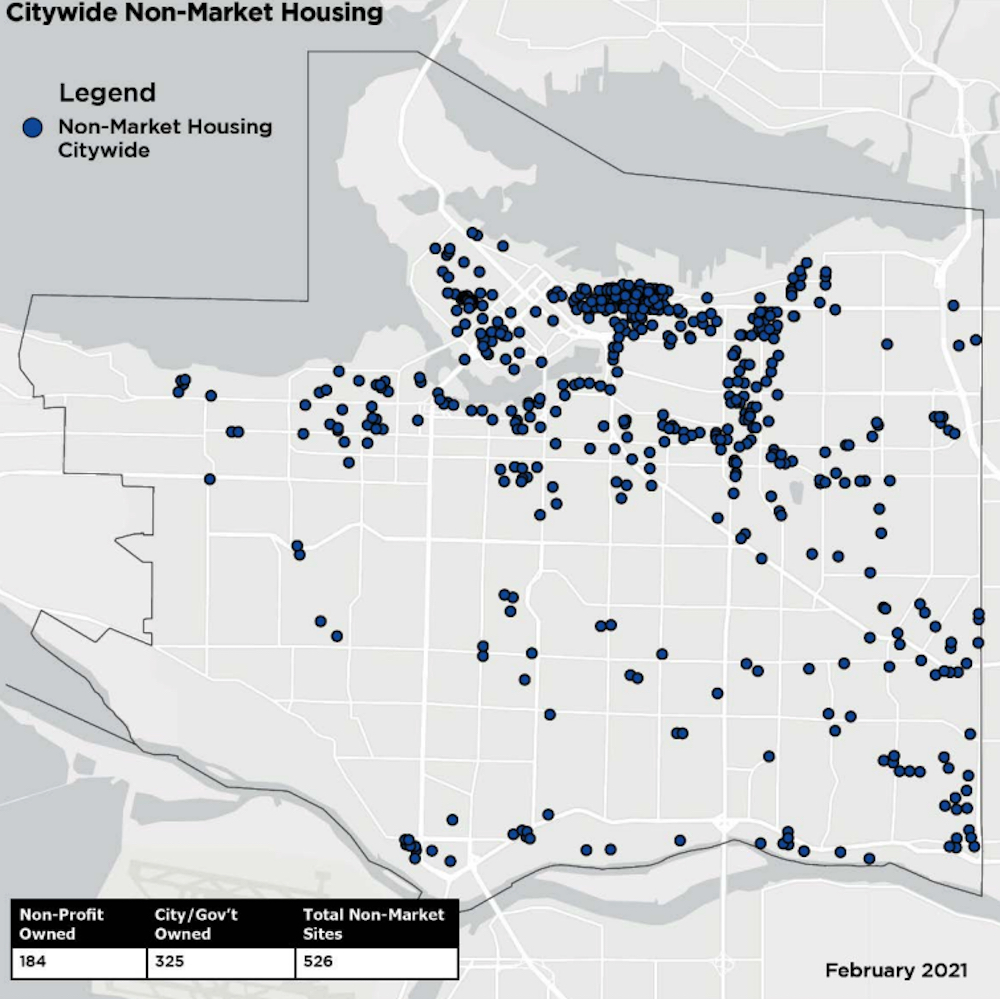