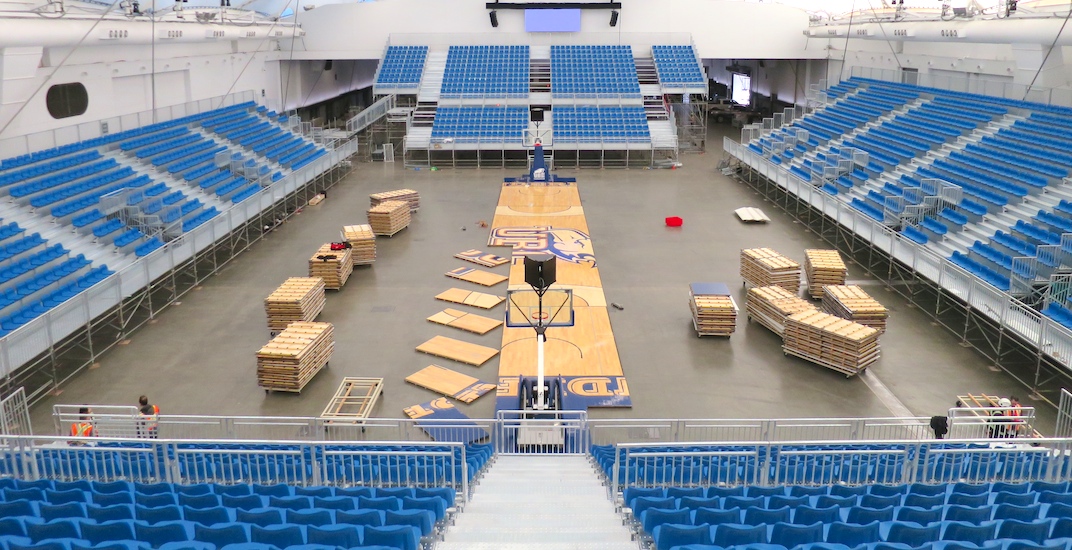 High-level NCAA basketball tips off this weekend, as a unique event arrives in Vancouver on Sunday, November 18.

Nearly three years after the event was first announced, the Vancouver Showcase features top calibre American college basketball in a unique setting. Instead of choosing a conventional basketball arena like Rogers Arena, UBC, or the Langley Events Centre, organizers instead opted for the Vancouver Convention Centre.

Under the sails at Canada Place currently sits a 3,200-seat temporary basketball stadium, which is nearing completion. 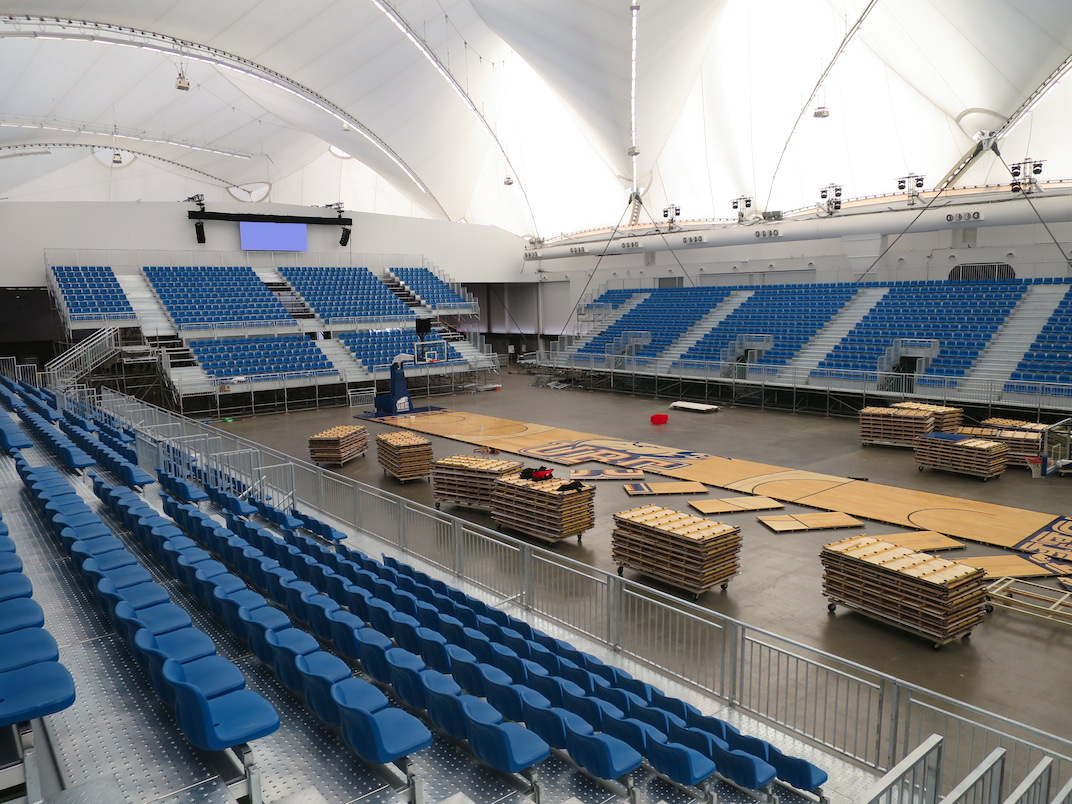 Typically used for trade shows and corporate galas, the East Exhibition Hall B multipurpose space hasn’t been used for a sporting event of this magnitude since 1990, when it hosted Davis Cup play.

The playing surface was officially listed as “carpet” back then. 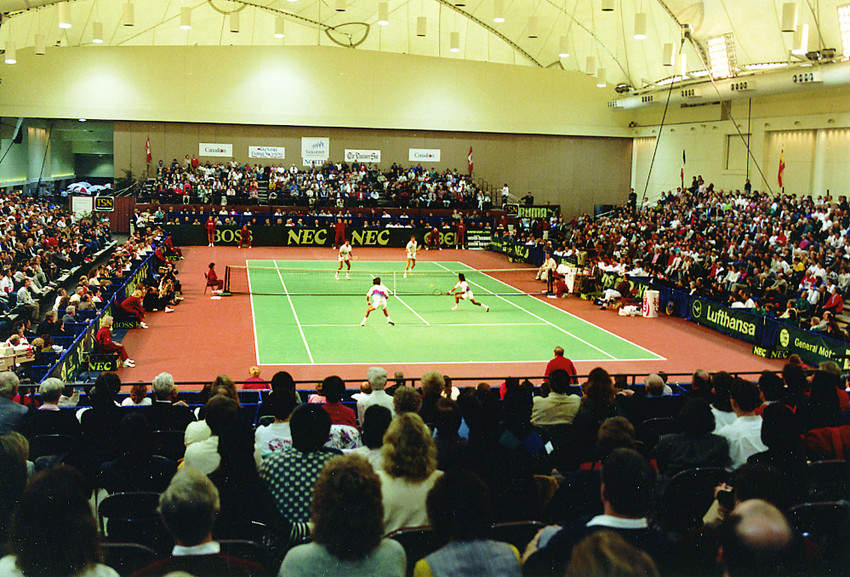 Hardwood is in place this time around, borrowed from UBC’s Doug Mitchell Thunderbird Sports Centre, as are a pair of electronic video boards at each end of the stadium.

Lights have been installed to make the court suitable for ESPN’s cameras, which will broadcast the games live in the United States (games can also be seen on TSN in Canada).

The neighbouring ballroom will serve as a space for security checkpoints and concession stands in the neighbouring ‘fan zone,’ as the Convention Centre borrows some stadium amenities from BC Place.

Four men’s teams and eight women’s teams are in action, as the Convention Centre becomes basketball central for seven days.

The University of Washington Huskies – ranked 25th in this year’s preseason – highlight a group of four men’s teams, which will compete in round robin action.

Also of note is Texas A&M, who made it to the Sweet 16 of this year’s NCAA March Madness tournament.

Minnesota and Steve Nash’s alma mater, Santa Clara, round out the group. 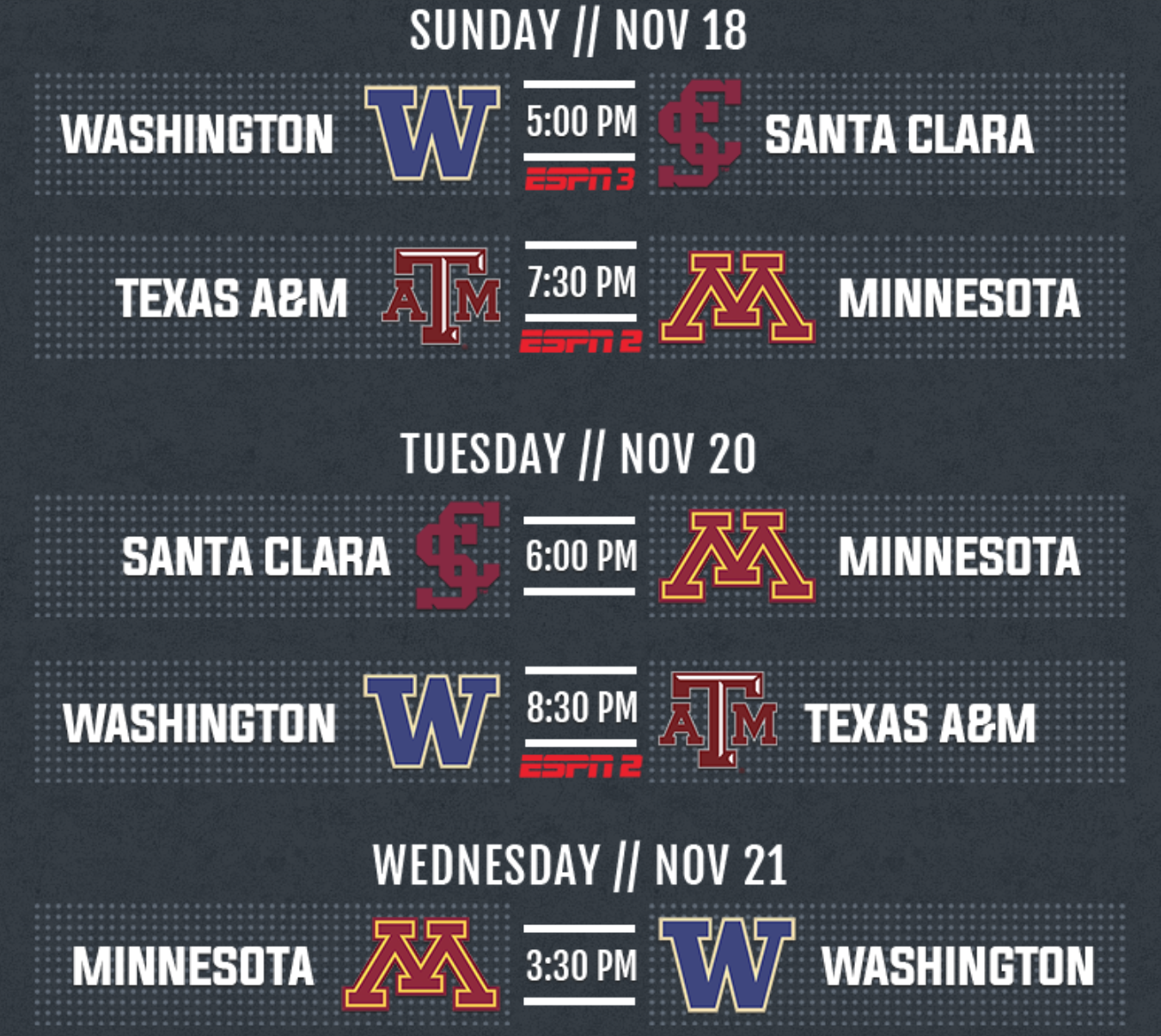 The bracket includes three top-10 teams, including No. 1 ranked Notre Dame, as well as Oregon State (8) and South Carolina (10). The tournament wraps up on Sunday.

Tickets are still available, so if you’re looking to attend, head to the Tickets Tonight website and get in on the action. 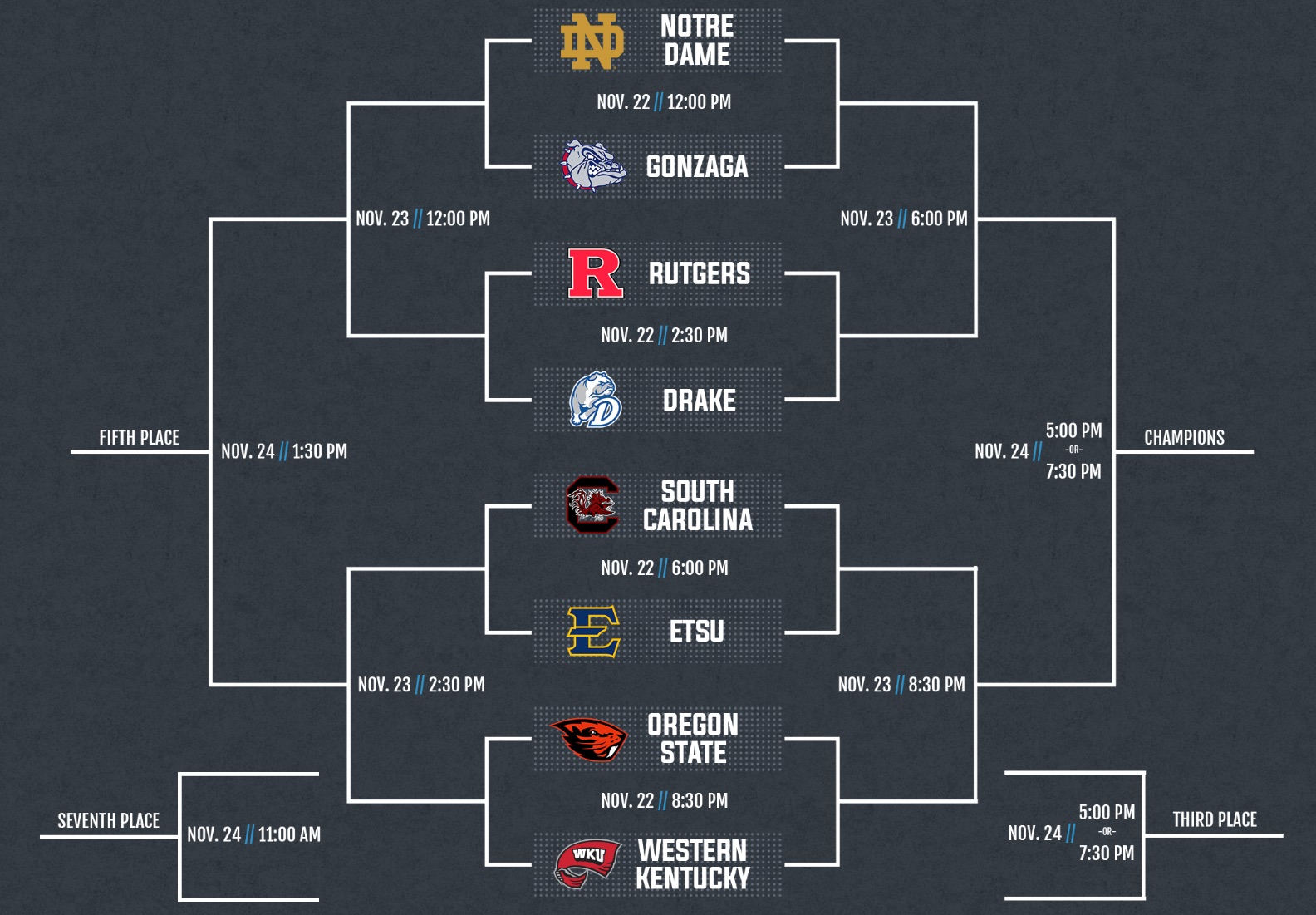 Here are some more photos of the space: 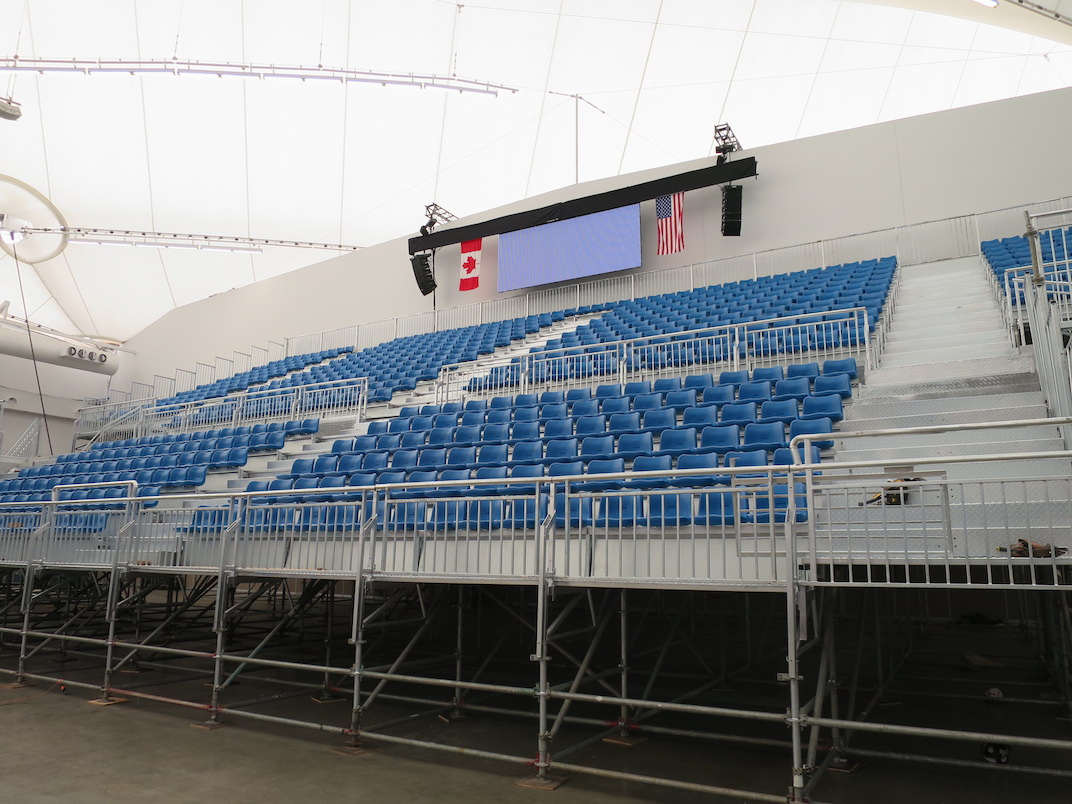 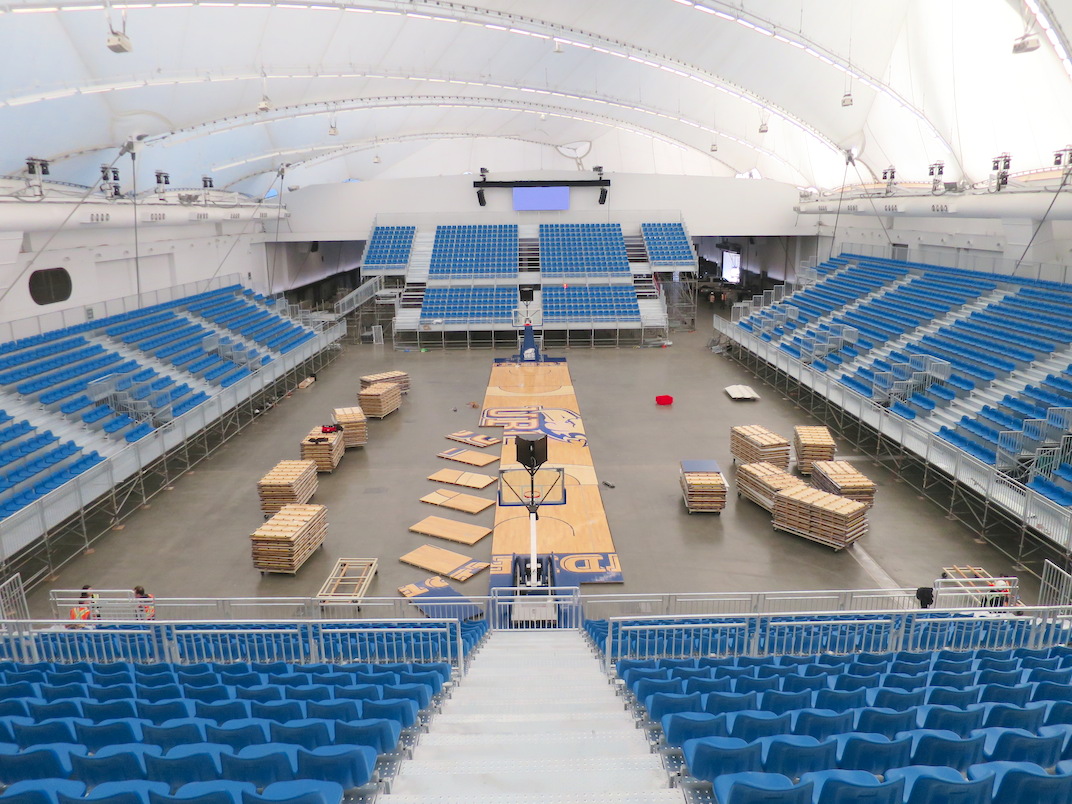 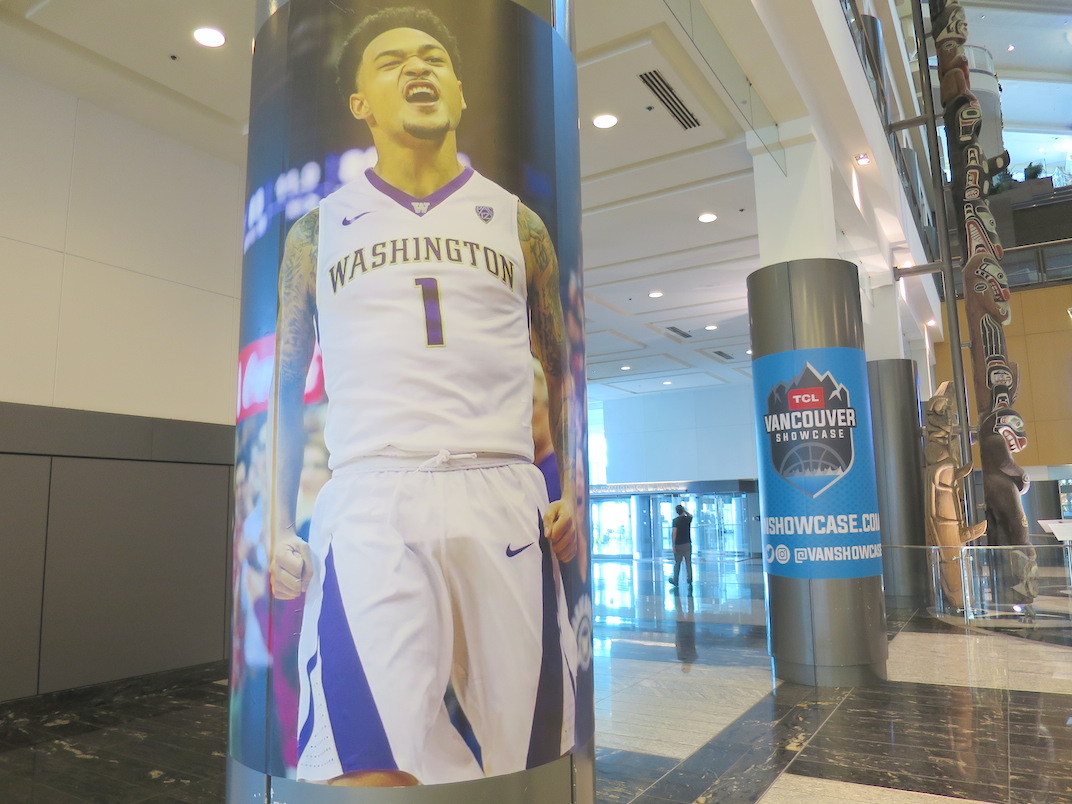 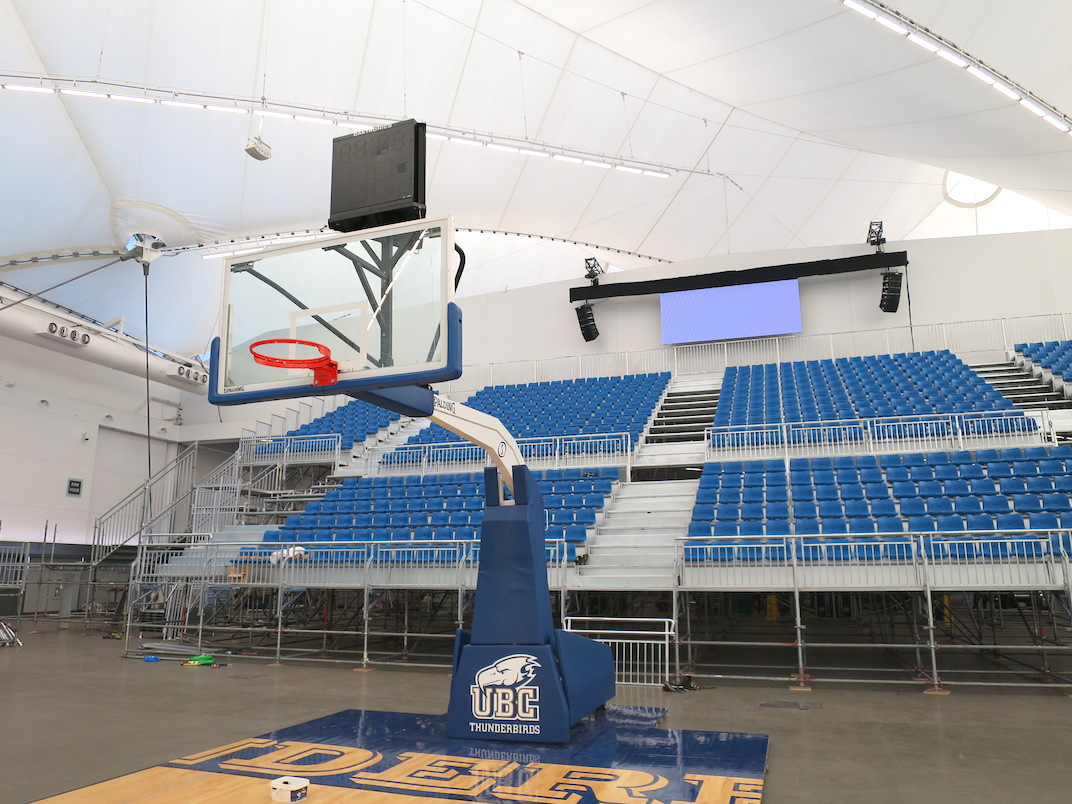 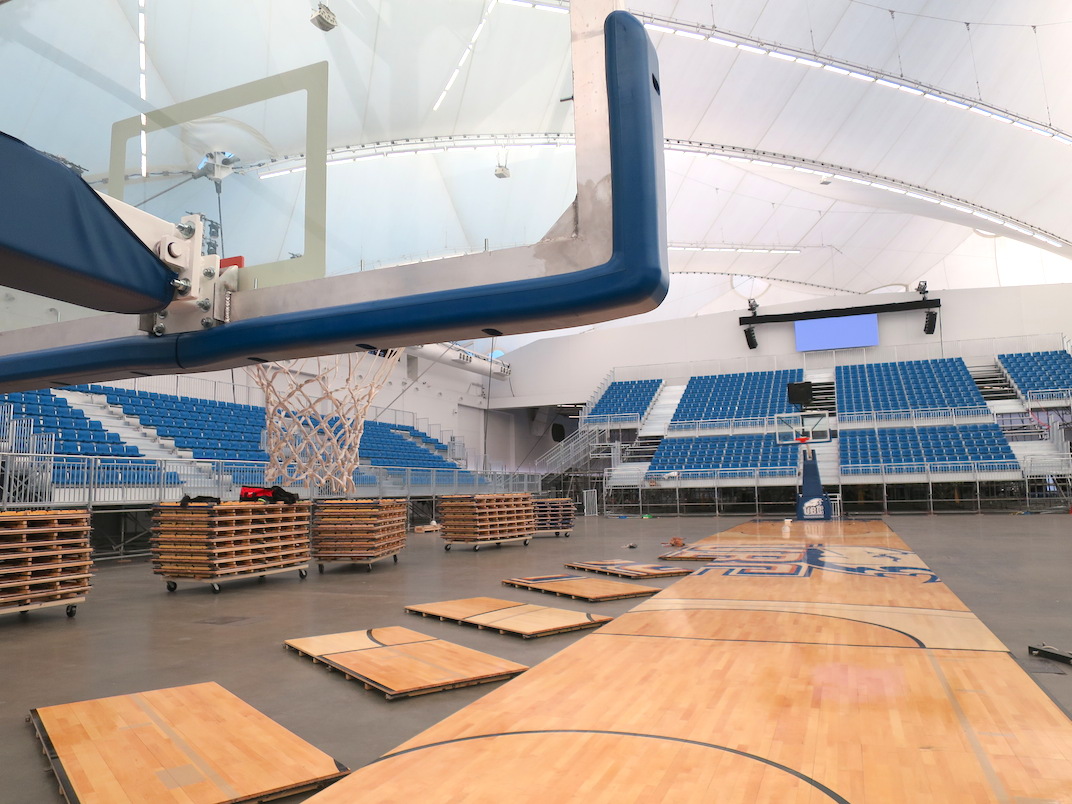 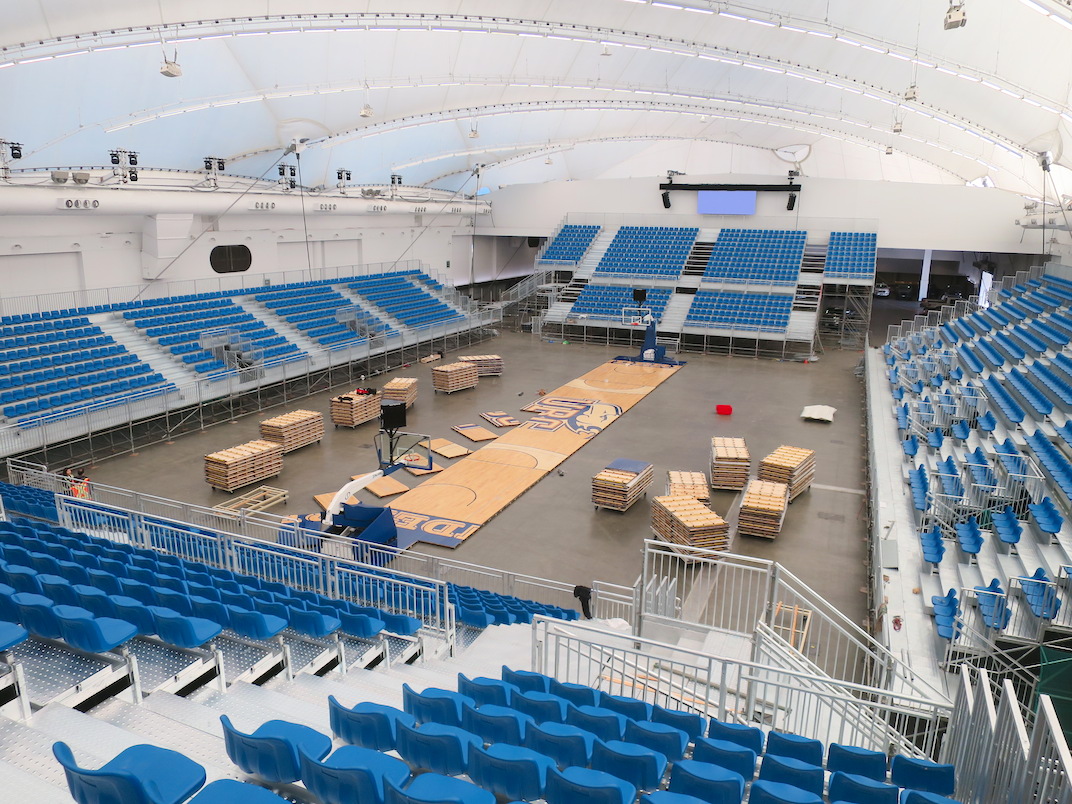 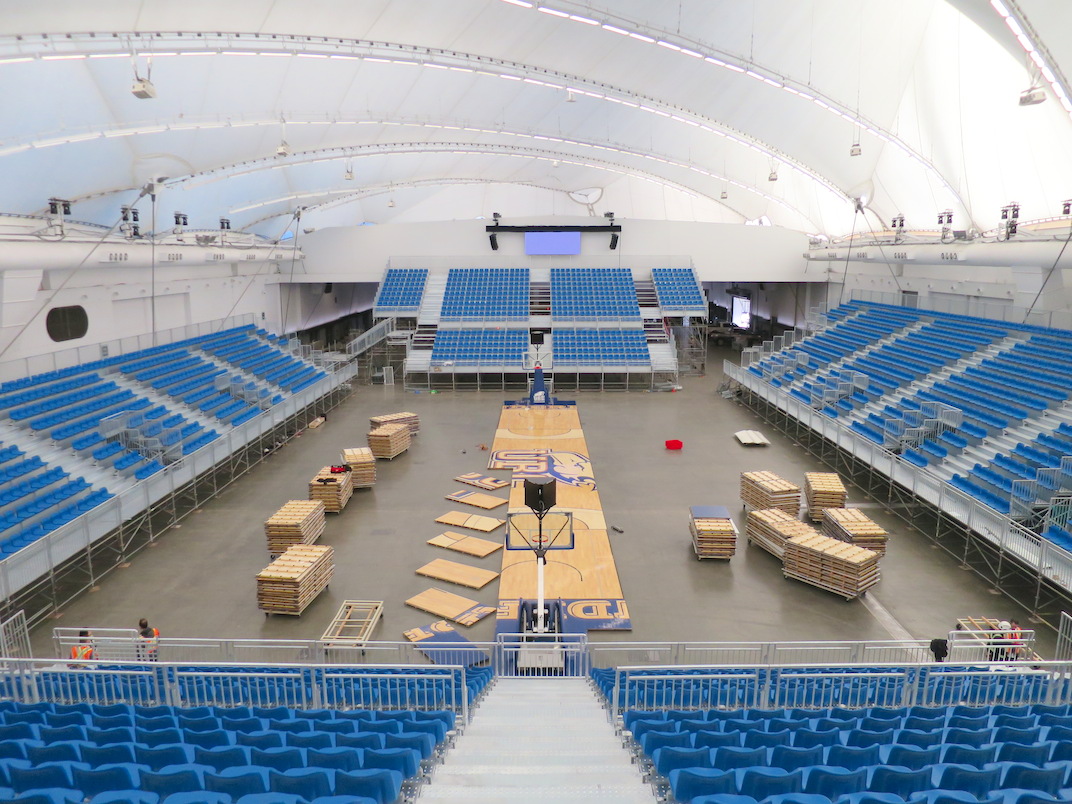 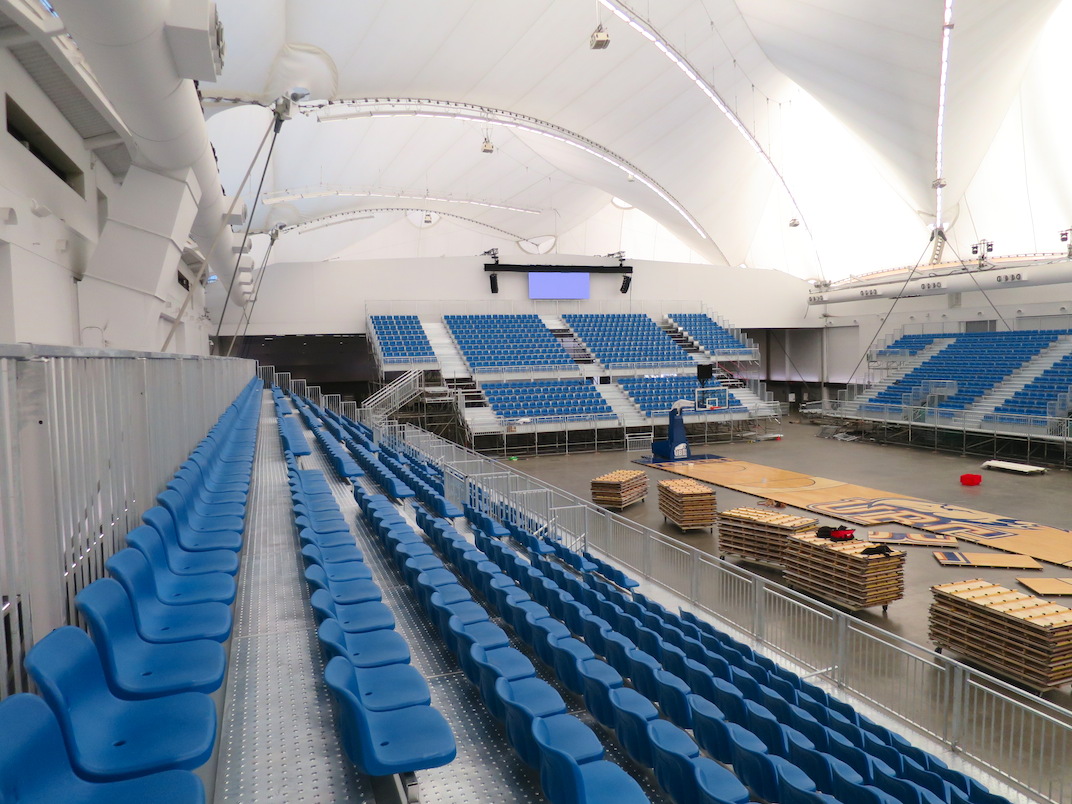 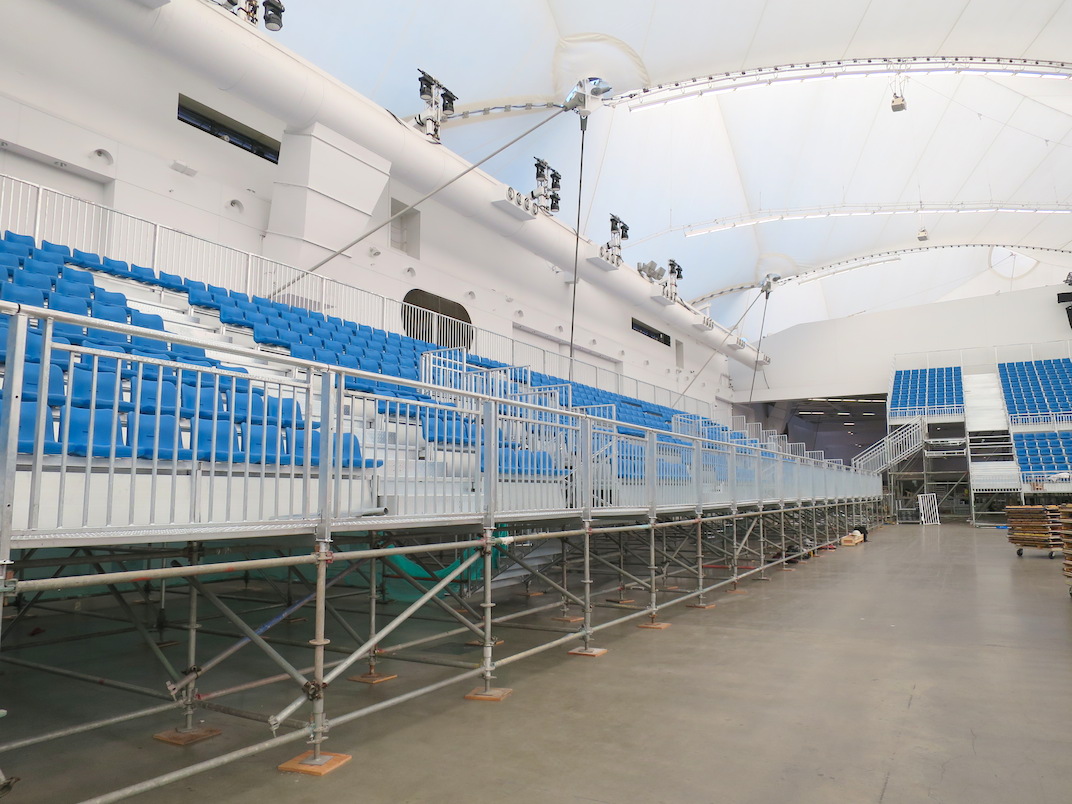