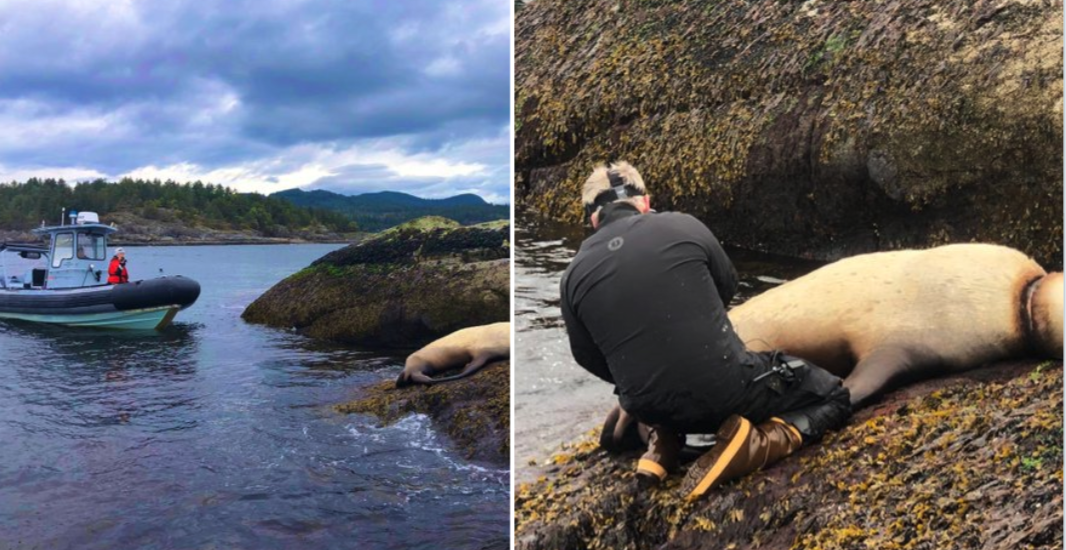 A sea lion tangled in plastic was rescued yesterday, thanks to a joint effort from the VPD Marine Unit and the Vancouver Aquarium’s Marine Mammal rescue.

“Helped the Marine Mammal Rescue Centre save a sea lion today,” stated the unit, adding that the “poor mammal had plastic wrapping around its neck and could not breath [sic].”

“Once the garbage was removed, the sea lion was able to swim away on its own.”

Helped the Marine Mammal Rescue Centre save a sea lion today! Poor mammal had plastic wrapping around it’s neck and could not breath. Once the garbage was removed the sea lion was able to swim away on its own 💜 @VancouverPD @vanaqua pic.twitter.com/VclECUzyd6

In an email to Daily Hive, the Sarah Ellam with the Vancouver Aquarium Marine Mammal Rescue Centre said that the Department of Fisheries and Oceans (DFO) received reports from the public about female Steller sea lion last week but were unable to locate the animal.

They received another report this weekend and skeleton crews from the DFO, and Marine Mammal Rescue Centre, and VPD Marine Unit were quickly dispatched to Trail Islands Sunday.

“It was a complicated but smooth rescue, given the location of the animal and severity of the wound,” said Ellam, adding that Steller sea lions are considered a species at risk and the animal had “plastic packing band deeply embedded in its neck that had likely been there for months.”

Ellam says the sea lion was treated with antibiotics after the rescue and “returned to the water afterwards where it is hoped she will heal from her injuries and regain her health.”

Vancouver waters have seen quite a bit of marine action in the past few days. Over the weekend, orcas were spotted swimming in the Burrard Inlet.

Several people shared photos of orcas in the Burrard Inlet this weekend showing their dorsal fins and distinctive markings incredibly close to shore.