After Migos’ set was cancelled on Sunday night at the inaugural Breakout Festival, fans took to social media to express their anger and disappointment.

Breakout was supposed to be Vancouver’s first ever outdoor hip-hop and R&B music festival, and Migos was arguably the biggest name on the lineup.

“For reasons beyond our control Migos didn’t make it to Vancouver tonight,” announced the Festival, 20 minutes before their set time. “From Migos ‘We love Vancouver and really wanted to make it to BREAKOUT Festival tonight. We hope you continue to support this festival. We’ll make it up to y’all soon.'”

Which they will, because they are in Vancouver again with Drake in November.

But that doesn’t help the fact that fans dished out $129 for a single day pass, and mostly to see Migos.

While Breakout announced that Lil Pump was going to headline the second day of festivities, Vancouver just wasn’t having it.

“lil pump will now be headlining breakout!” delete ur festival

The Facebook event page was also flooded with comments, and with a total of three cancelled acts over the weekend, almost everyone is now asking for a refund.

“Want my money back,” said one festival attendee.

Another wrote that they travelled to Vancouver just to attend the festival, and is left feeling “ripped off.”

“I’m angry,” said a Migos fan. “Two tickets for Breakout (both days) plus travel from Victoria and back and hotel in Vancouver. I’m in this over $1,000 and three main artists didn’t show including the headliner Migos. What a disappointment. Feeling ripped off.” 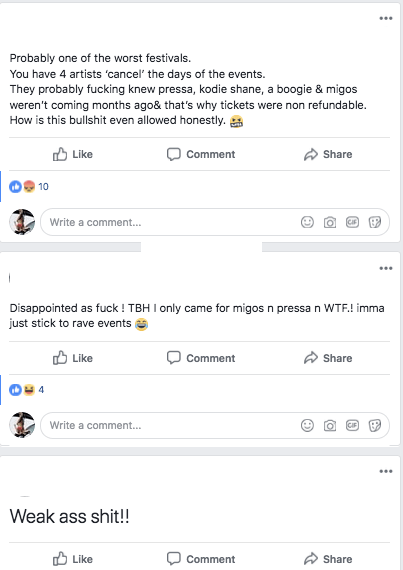 Presented by Timbre Concerts and CRESCENDO1, Breakout Festival promised to bring a two-day hip-hop musical experience to the PNE Amphitheatre.

Instead, it left the concert-goers just happy that there was pizza.