New York was named ‘2015 Youthful City of the Year’ in the largest ever study into how the world’s top cities measure up from the perspective of youth.

Vancouver ranked seventeenth in the index, coming in second place for Canadian cities, beaten by Toronto in sixth place but coming in ahead of Montreal, which landed at a respectable eighteenth place.

Part of a larger venture challenging youth to regenerate the world’s biggest cities, the 2015 YouthfulCities Index ranked 55 cities from across the globe using 101 different indicators across urban attributes such as transit, employment and sports.

The initiative is the first attempt to quantify which cities are most attractive and suited to young people aged 15-29. It sets a leading edge view of cities that are on the rise.

Youth are great equalizers in the urban context. Almost all world regions have a city in the top 20. USA/Canada – 9 cities; Europe – 5 cities; Asia – 3 cities with Tokyo tops at twelth; Latin America – 2 cities with Mexico City leading in ninth, and the Middle East with Tel Aviv in fourteen spot. The leading African city was Johannesburg (coming in at number thirty-five). All six global regions had cities among the bottom 25 cities in the index.

Sonja Miokovic, co-founder of YouthfulCities said: “We are at a time of unprecedented opportunity to transform the places we live, work and play by engaging the world’s largest untapped resource – youth! Half of the world’s population is under 30 years old and half now live in cities. Youth and cities –especially the largest ones – will together shape the future of the planet. That’s why it is essential for cities to appeal to youth and actively find ways to unlock their potential.

“This index creates a wealth of comparable knowledge based on what is important to youth. This understanding is critical for city leaders and urban designers committed to making smarter choices that attract and enable young people to fulfill their ambitions.” 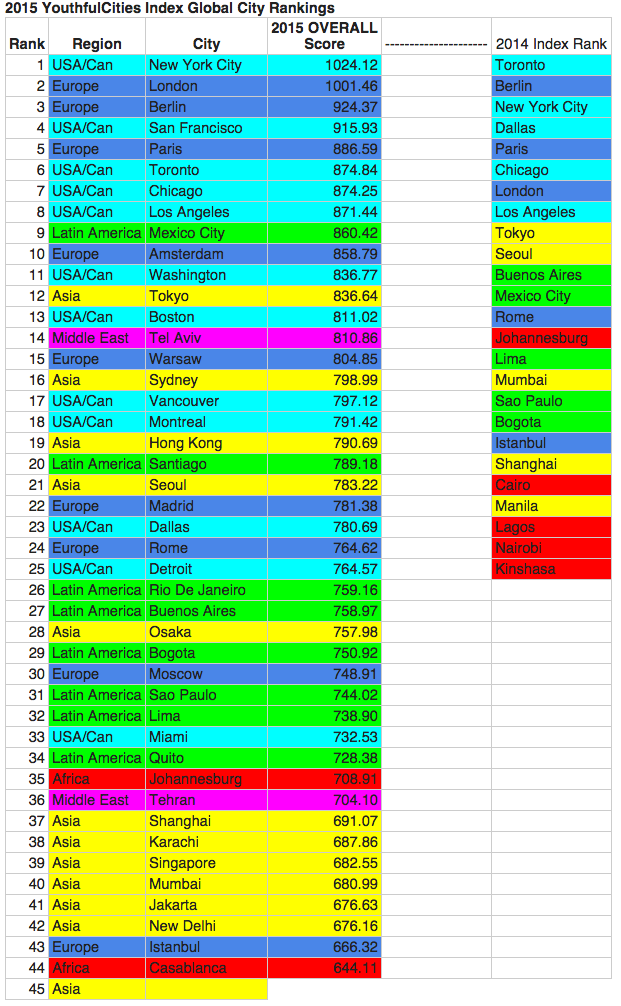