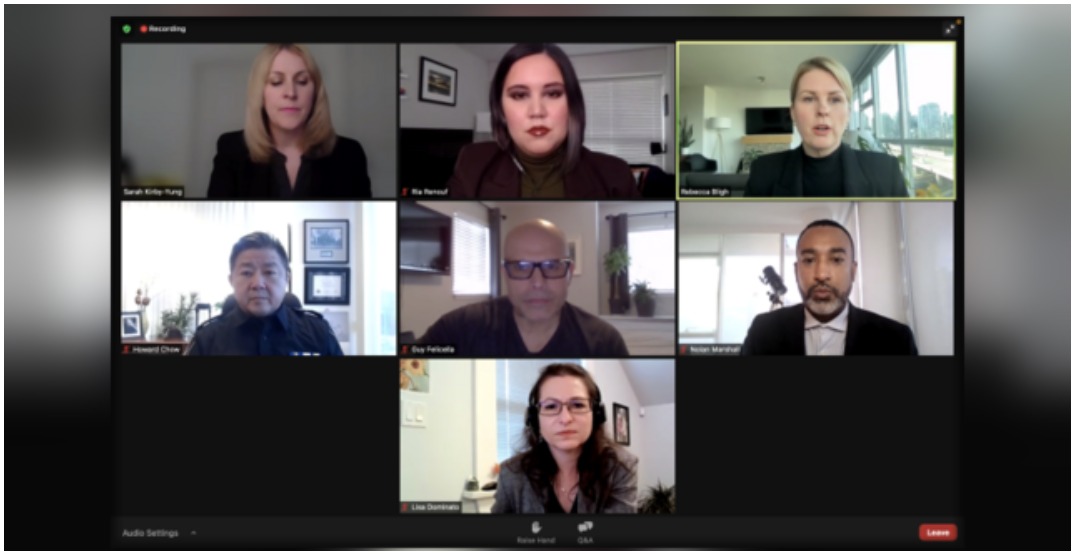 City councillors in Vancouver heard from worried citizens at a public safety forum this week.

The first event — in a series called “Speaking of Vancouver” — on March 3 saw tremendous concern from residents worried about a recent rise in random attacks — an average of four per day.

Around 40 minutes after they started the Zoom call, they already had over 60 questions to answer, submitted by people watching online.

The event was hosted by Vancouver journalist, Ria Renouf who was joined by panelists including the Deputy Chief of the Vancouver Police Department Howard Chow, Harm Reduction and Public Safety Advocate Guy Felicella, and President and CEO of the Downtown Vancouver Business Improvement Association Nolan Marshall.

Chow confirmed an alarming number of stranger attacks have been reported in Vancouver over the past few months, with 1,555 recorded between September 1, 2020, and August 31, 2021. That marks a 35% increase since 2019.

Notably, nearly half of those attacks involved a weapon like a knife or pepper spray.

They were also entirely random.

“The assaults were not committed by intoxicated people coming out of bars or people caught up in a road rage incident, but are completely random and unprovoked,” said Chow.

“We’re talking about people who are just standing there … and get assaulted.”

Participants could interact with the hosts via raising their hands on Zoom, answering polls sent throughout the session, and sending inquiries to the Q&A.

The first poll asked, “Do you think Vancouver is safe?” Results showed 69% said yes and 31% said no. 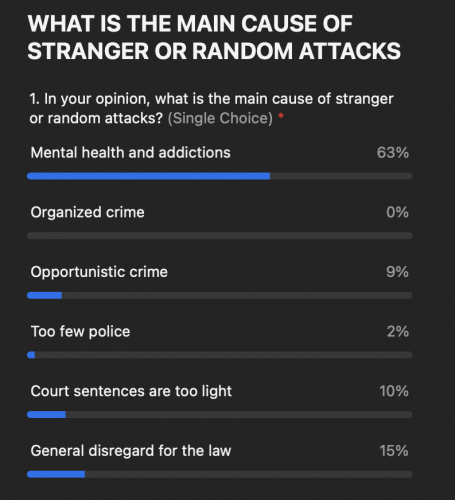 The second asked, “Are you worried about your personal safety?” Those results showed 73% said yes and 27% said no.

The next question — “What is the solution to increases in crime?” — allowed people to pick from these options: visible police presence, mental health and addiction services, justice reform/restorative justice, tougher sentences for prolific offenders, and social programs targeting poverty. 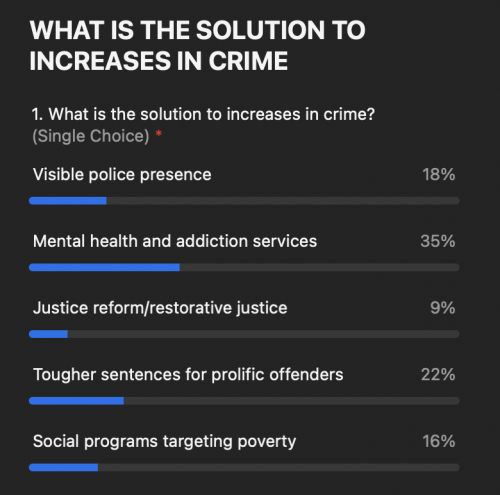 Mental health and addiction services scored the highest at 35%, followed by tougher sentences for prolific offenders and visible police presence.

Another telling poll asked what attendees thought the main cause of stranger or random attacks is in the city.

The Q&A section of the event went long, with too many questions in the queue to be answered.

“Many people in the City of Vancouver do not feel as safe here as they did a few years ago, and I want to help fix that,” said Bligh.

“I think we’re at a tipping point here. We need to work together and pay attention.”

One prevalent theme throughout the Q&A was the audience’s perception that people struggling with mental illness and addiction are to blame for the attacks. Chow and Felicella say that’s not true.

Several citizens raised concerns about the impact of supportive housing projects on nearby communities.

Chow and Felicella responded by saying that if the housing is truly supportive, the people living there are actually likely to contribute to the surrounding neighborhood.

The greater issue, they say, is existing housing isn’t cutting it, nor are recovery and safe supply programs.

“You can’t support public safety yet not support having affordable housing in your community,” said Felicella.

“You can’t pick and choose where these places are, and that’s often what happens, and it often discriminates against people who are homeless which can be frustrating not only for them but for their community as well.”

It’s hard to believe this is sincere after months of meat-cleaver attacks, random stabbings, and nightly shattered windows in downtown #Vancouver — with this mayor denying the whole time that we even have a problem. #vanpoli https://t.co/PiTfo82U9p

Treatment on-demand for people recovering from substance abuse disorders is important, as is trauma therapy, which isn’t covered under MSP, he said. He’s a strong advocate for helping people who use substances live a lifestyle they’re proud of.

Prolific offender & incorrigible; 2 things I’ve been called & 2 things people told me would never change. People can change when they’re supported, after all I did! #FridayMotivation pic.twitter.com/jBNzOUlegG

However, Chow adds, it’s also important to know most of the people attacking strangers aren’t the people living on the streets or in supportive housing. They’re violent, repeat offenders known to the VPD.

He says the people they’re charging with random, unprovoked attacks have usually been under VPD custody “two, three, four, 500 times in their history, and that’s not exaggerating.”

Marshall jumped in on the BIA’s behalf, saying they advocate for affordable housing and access to complex care in Vancouver as a way to reduce violence and improve the community.

“In theory, really good, supportive housing that’s close to retail jobs and service industry jobs and hospitality jobs could create a meaningful pipeline for people to transition to some meaningful employment from being formerly homeless,” he said.

“We support supportive housing. What we don’t support is an environment that’s probably not good for the neighbourhood and probably the people living around that environment if the goal is to transition them.”

He added installing more lights along streets and sidewalks could make everyone in the city feel safer, whether they’re housed or not.

Felicella emphasized the importance of effective rehabilitation programs and supportive housing as a primary solution.

More municipal meetings on public safety will be happening in the spring.