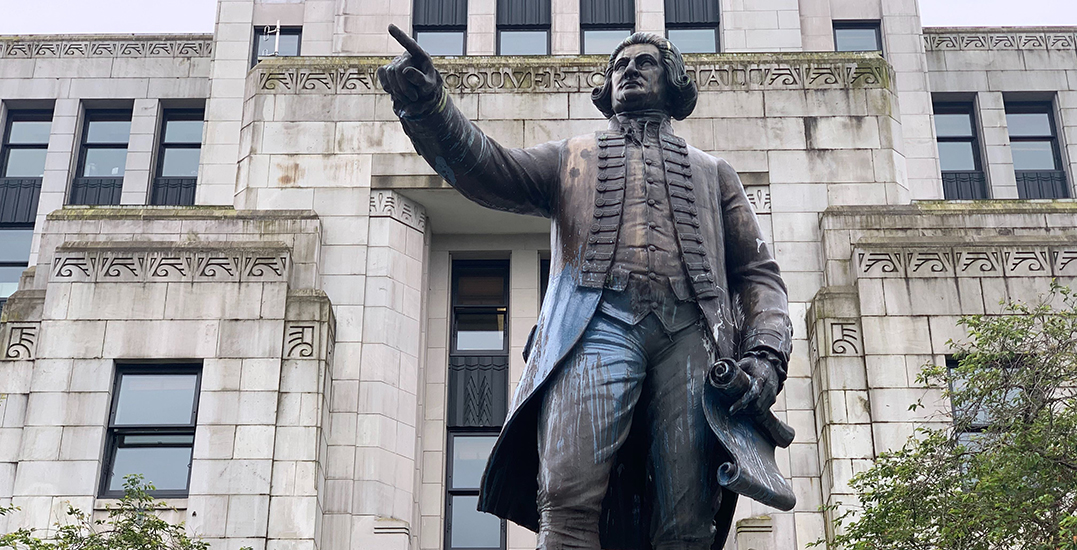 The George Vancouver statue at City Hall which was covered in blue paint earlier this month. (Daily Hive)

The City of Vancouver announced a number of steps being taken to address both historic and ongoing racism in the city.

The move, according to a written statement, was prompted by ongoing racism against the Black community, the sharp increase of anti-Asian racism during the pandemic, as well as the continued racism experienced by Indigenous communities.

Mayor Kennedy Stewart says that while City Council has taken “every opportunity” to denounce racism, “it’s clear that much more needs to be done.”

“Changing structural racism needs the support of all elected leaders, at all levels,” he says, adding that he has reached out to senior levels of government regarding the subject as well.

One of the key actions being taken by City staff includes accelerating the development of a “Commemorations Policy,” which would review statues, street names, and other city assets.

Within the past seven days, two of Vancouver’s statues were defaced. Last week, a statue of Captain George Vancouver at City Hall was covered with blue and yellow paint, while a statue of John Deighton in Gastown was vandalized on Tuesday morning.

Another step being taken includes the City reconnecting with Hogan’s Alley Society, as a means of better understanding the organization and the broader community. Part of the discussions include the vision of readdressing part of the North East False Creek Plan.

Other initiatives mentioned include creating a working group to gather racialized data, increase safe reporting, and provide more support for victims and targets of hate crimes and racism.

Stewart also says that he’s calling on the provincial government to appoint a format representative for those impacted by racism in BC.

Prior to Wednesday’s announcement, the City of Vancouver launched an anti-racism campaign at the end of May and funded the Chinatown BIA to provide additional security, among other measures.