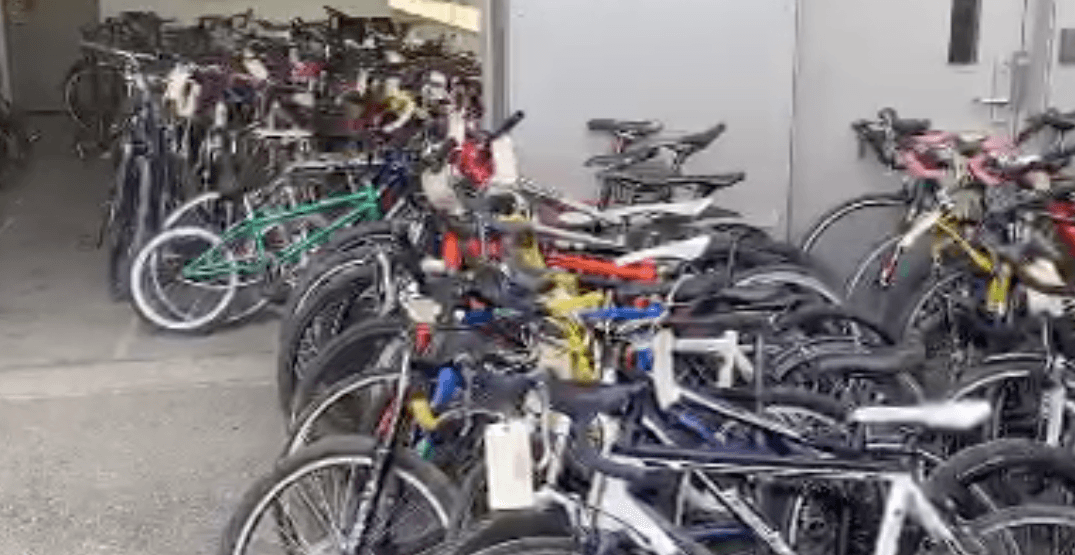 A screenshot of the stolen bikes during a police press briefing today. (VPD)

Calling it a “substantial seizure” Vancouver Police announced on Wednesday that they had recovered “tens of thousands” of dollars worth of stolen bicycles, scooters, and electric bicycles from an East Vancouver storage facility.

The seizure took place on August 29, after patrol officers investigating an unrelated incident in the 800-block of Powell Street were led to a nearby storage facility.

It was here police discovered “multiple” storage lockers with the bikes inside — 148 of them in total.

Three men from Vancouver and one man from Surrey were arrested in relation to the seizure and released without charges, although police said they are continuing the investigation and “may recommend charges based on the applicable evidence.”

In the meantime, police are working to get the stolen bikes back to their owners by consulting existing police reports and working with 529 Garage.

“Often, when we are dealing with reports of stolen bikes, we find that owners are unable to provide serial numbers or other identifying descriptions that could help us get their bike back to them,” said VPD Sgt. Aaron Roed. “We encourage all bike owners to register their bicycles with the serial numbers, free-of-charge, in the 529 Garage registration and recovery program.”

Anyone who has not reported their bike stolen to VPD is asked to do so using the online crime reporting system or by calling the non-emergency police line.

Over 1,600 bicycles have been reported stolen in Vancouver since the beginning of this year, police said.