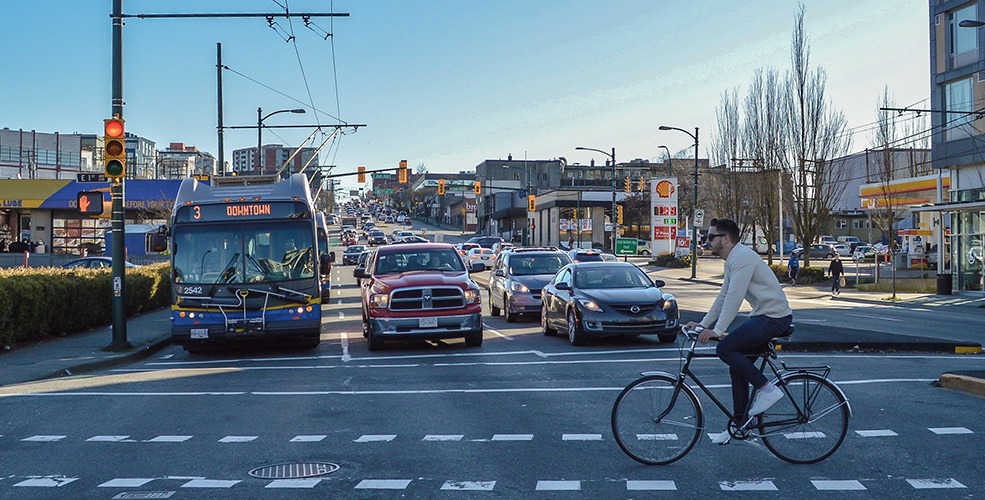 We were fortunate enough to get out of Vancouver for much of the summer, spending five fantastic weeks learning firsthand what makes Dutch streets some of the safest in the world (spoiler alert: it isn’t bike helmets or high visibility clothing).

While we tried to tune out local affairs for our own sanity’s sake, one thing repeatedly caught our eye. On several occasions, we spotted tweets about the Vancouver Police Department (VPD) assigning officers to the city’s protected bike lanes and traffic-calmed bikeways during rush hour, issuing fines to cyclists who chose to forgo the provincially mandated head protection (in one specific instance – on the physically separated York Avenue cycle track – the officer went as far as to hide behind a tree).

We sincerely hoped this was the beginning and end of this counterproductive charade; a rush to secure the annual quota of cycling-related fines, in order to keep up the appearance of doing something about bike safety. But – to our immense surprise and frustration – on Friday, the VPD revealed it would be extending this egregious waste of resources, deploying a permanent traffic enforcement team to prosecute “reckless” behaviour by individuals on foot, bicycle, and skateboard.

In a spectacular feat of victim blaming, Constable Brian Montague justified the move by suggesting “annoying” acts by vulnerable road users (such as jaywalking) provoke those in a position of power into dangerous and stupid driving behaviour (such as “road rage”). Imagine, for a moment, we treated domestic violence with the same logic.

Montague then went on to note the crackdown was a result of complaints filed by drivers about the various nuisances they encounter on the streets of Vancouver. This – as our friend Neal LaMontagne pointed out on Twitter – suggests the VPD takes requests, rather than decides their priorities based on data, research, or defensible policy.

To us, it implies those who walk and cycle aren’t complaining nearly enough about the bullish, impatient, and threatening actions they encounter from motorists on a daily basis. Chasing down and fining the former is like cracking down on “reckless” water pistol owners in an attempt to stop gun violence.

This unprecedented and unnecessary crackdown ignores a simple truth: the majority of people on foot and bike who break the law do so for their own safety. It is a reaction to treacherous streets and antiquated laws designed to maximize automobile flow and minimize driver inconvenience, rather than preserve life and encourage active modes of transportation.

One simply needs to spend some time standing at the faded crosswalk at East 10th Avenue and Victoria Drive – near our kid’s school – to understand the real threat to human life on our city streets. Drivers speed, text, and race between the red lights at Broadway and 12th Avenue with impunity, while small children patiently wait to cross the street to get to class. Every second spent prosecuting pedestrians or cyclists – rather than the individuals directly endangering the lives of children with their own reckless behaviour – should be a source of civic outrage.

Is it too much to expect those tasked with serving and protecting our citizens choose an evidence-based approach – taking into consideration best practice from jurisdictions around the world – rather than employ enforcement in reaction to anecdote and whoever complains the loudest? Do the VPD work for the families who live here in the city, or the “squeaky wheels” (most of whom live in another surrounding municipality) who expect to drive through it as quickly and painlessly as possible?

Vision Zero is a growing social justice movement spreading from Northern Europe to cities around the world, demanding our leaders get serious about reducing the number of road fatalities to zero. As the World Health Organization notes, over 270,000 people are killed while walking every year, equivalent to an airplane falling out of the sky every other day. Somehow, we accept this carnage as the status quo.

Vancouver can consider itself a Vision Zero leader in a North American context, as it continues to prioritize walking and cycling through important infrastructural investments (such as building better streets). But to get to that stated goal of zero deaths, and to increase active transportation to two-thirds of all trips (as outlined in our Transportation 2040 Plan), we must get the Police Department on board.

“We need to acknowledge the streets of Vancouver are a shared roadway system, with shared rights and responsibilities that are designed to keep ourselves safe, and others safe,” Sergeant Randy Fincham, VPD Acting Director of Public Affairs, told us.

While the new squad is being branded as an enforcement team, he stresses the vast majority of their work will be about education. “We are focused on educating all road users about the dangers of not following the rules, which are in place to keep everyone safe. Excluding one particular group would be irresponsible of us.

“While drivers have to pass a test to get the license, the same isn’t true of other road users, and unfortunately education then falls on the police.”

In most cases, Fincham suggests verbal warnings will be issued to the offending party, and violation tickets will only be issued in the most extreme cases.

Fincham also reminds Vancouverites that – if they encounter a dangerous driver – they can record the license plate and file a report using the VPD’s non-emergency line: 604-717-3321. Staff will assess the call, and – if they deem it necessary – follow up with the driver to discuss the incident.

As we move into the short, dark, wet days of autumn, and tens of thousands of kids return to school, we fear authorities will continue to focus on the clothing and behaviour of those outside automobiles. This further enables those inside automobiles, by failing to implore them to slow down, pay attention, respect the most susceptible to injury, and treat driving as a privilege rather than a right.

One only needs to spend time walking or cycling with the young or elderly to truly appreciate how hostile huge parts of our city remain to anyone without a car. There is still a great deal of difficult work remaining to challenge that status quo. We hope the VPD will ultimately decide to help, rather than hinder, that important effort. Countless lives – including those of our own family – depend on it.