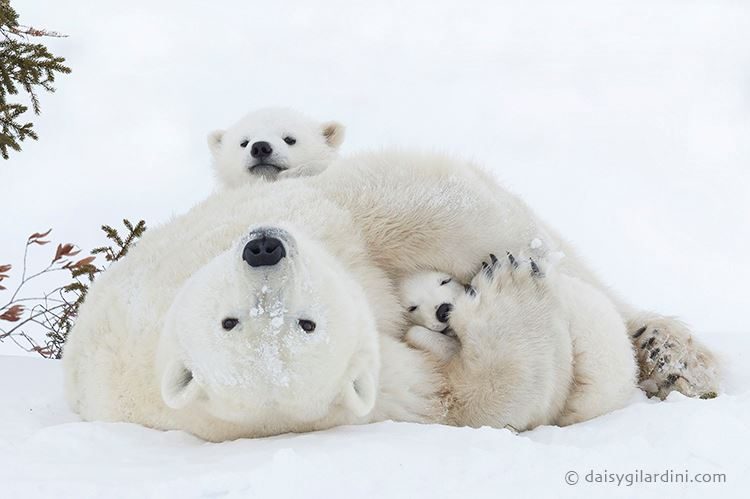 This photo, taken in Manitoba by a Vancouver-based photographer has won an international award. (Photo credit: Daisy Gilardini)

A Vancouver-based photographer has won an international award for her picture of a polar bear with two cubs, selected as the the top shot for the 2016 Nature’s Best Photography awards competition.

Daisy Gilardini’s photo was chosen from more than 20,000 entries in 51 countries, and is now on display at the Smithsonian’s National Museum of Natural History in Washington, DC.

And while she’s “thrilled” about the award, she’s even more thrilled about the chance to “give a voice to creatures that cannot speak up.”

For Gilardini, the grand prize award has been more than a decade in the making.

“I have been submitting my images to the Nature’s Best photo contest since 2003,” she told Daily Hive in an email.

Along the way, she had a “few highly honoured” images and one category winner, but until now, had never cracked top spot.

“Photography is all about patience and perseverance,” she said.

And with her grand prize win, her perseverance appears to have paid off.

Actually seeing the bears and capturing the moment was a memory in itself as well.

“Being able to witness such cuddling behaviours of a mama bear with her cubs warms your heart up,” she said.

The warm and cuddly feeling of the photo was a direct contrast, though, to the environment in which it was taken.

Gilardini captured the shot in March of this year, in Manitoba’s Wapusk National Park, where temperatures dropped to -54°C, and wind gusts measured 60 km per hour.

“You have to face incredible challenging conditions,” she said. “All the efforts are well rewarded though, when you get to experience such intimacy with the most iconic animal of the Arctic kingdom.”

With her photo now internationally recognized and on display, it’s a given that even more people will see that intimacy with the animal kingdom through her eyes.

“Every year, seven million visitors go through the Smithsonian,” she said. “It  is the perfect place, where science meets photography… to educate and create strong messages.”