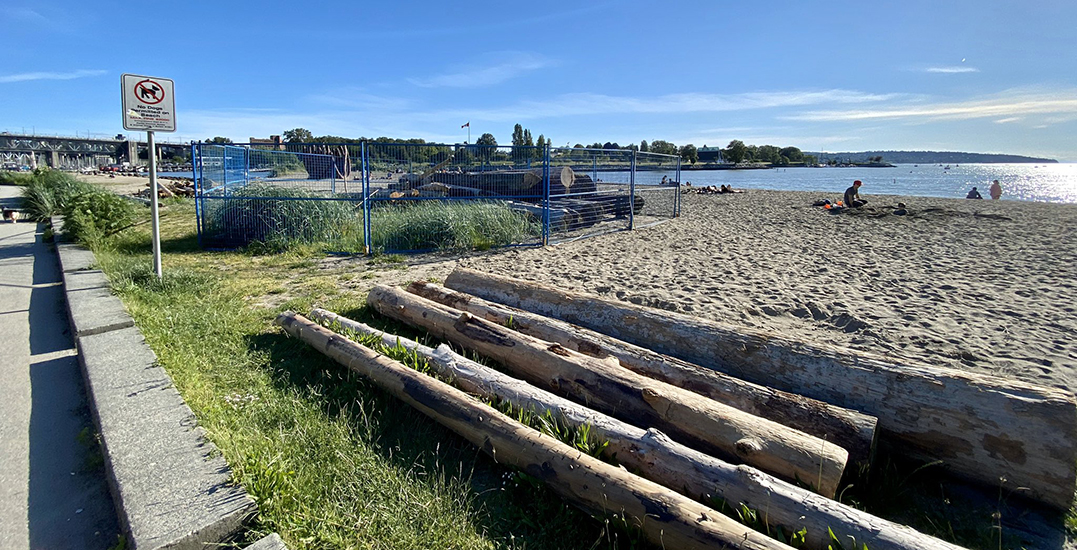 After being placed in what some local residents have jokingly called “log jail,” the Vancouver Park Board (VPB) is returning logs to beaches across the city.

They were initially removed by VPD staff in mid-March to discourage large gatherings at the beach during the pandemic. Photos were shared on social media showing piles of logs, typically used by visitors for seating, blocked away by tall blue fencing.

I could keep posting pictures of near-empty streets downtown but none of them are as obviously weird as this picture of beach logs in log jail. #logjail pic.twitter.com/1NaRjN5iZV

The parking lots at beaches and parks across Vancouver, including Kits Beach, Jericho Beach, and English Bay, were also closed down in late March. More than 7,000 stalls were reopened to the public near the end of May.

Christine Ulmer, spokesperson for VPB, told Daily Hive that logs will be gradually returned throughout the month, starting with Sunset Beach and English Bay.

“The Park Board team will be starting at Sunset Beach and English Bay and will then move toward Kits and further West, with a goal of returning the logs gradually by the end of the month,” says Ulmer.

And in other news, several high profile logs have managed to escape log jail at the Sunset Beach Correctional Centre. There appears to have been a leak in the facility’s fenced barrier. #Vancouver @ParkBoard has been called to the scene to investigate. More as this develops… pic.twitter.com/4qloQUKhss

She added that staff will only be returning logs that are “structurally sound” and that fewer logs are being returned to “create more open space on beaches.”

Anyone who does take advantage of Vancouver’s parks and beaches is reminded to maintain a safe physical distance from those outside of their household.

Our crews have begun their work to return beloved logs to #Vancouver beaches. The work will continue through the month of June, starting with #SunsetBeach, #Kitsbeach + moving West. Please remember to #staysafe & maintain 2M from those outside your household.