The Olympics merchandise just keeps getting better. I, like a million others across the nation, have already scored those lovely red mittens and even some cool BC ‘sporting event’ gear courtesy of the good folks at lululemon. However, the one thing I want to get my grubby little paws on most are those limited edition Vancouver 2010 Olympic mascot vinyl figures. Many seek these but do not know where to get them until now…
I’ll tell you a little secret, just head on over to Voltage on Main Street tomorrow (however, I would call them first to make sure the shipment has arrived). Further, if you want these you have to buy them in store as Voltage is not allowed to sell them on-line (VANOC request). You are welcome.

A little bit of information on the vinyl toys, VANOC selected Happy Worker to create these marvelous little guys and they did a fantastic job. These are perfect to decorate your desk with. I know I hope I’m able to score a box set (retails for $35 and is the only way you can get Mukmuk). Individual toys will run around $14, but most are interested in the box set. 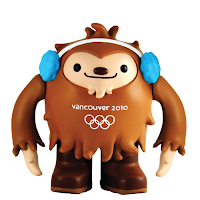 Quatchi is one of the official olympic mascots of the games. He’s a friendly, fully poseable sasquatch with moveable arms, hands, and legs. While he’s shy and often hangs out in forests, Quatchi will happily join you in your travels to new places. He’s also a big hockey fan and loves to play goalie… though his toy-sized figure isn’t quite big enough to fill a hockey net. 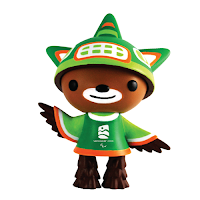 Sumi is the official paralympic mascot of the games. He’s an animal spirit figure with furry legs that turn and and a head that swivels. As you can see from his action figure Sumi is quite an unique critter. He wears the hat of the orca whale, has the wings of the thunderbird and the furry legs of the black bear. Sumi loves the outdoors, alpine skiing, and flying over the mountains with his friends on his back. 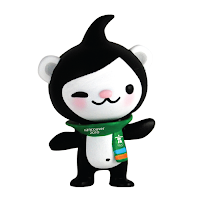 Miga is one of the official olympic mascots of the games. She’s a playable sea bear figure with moveable fin-arms and a swivelling head. Just what are sea bears? They’re orca whales that turn into bears when they come onto land. But Miga got stuck so she’s now part orca and part bear! Be sure to bring Miga along if you’re going surfing, snowboarding, or doing anything fun and exciting!

Once the Olympics are over, we will be holding a contest to give away a DIY Quatchi, but we must wait for the Olympics to be over because we do not want to face the wrath of VANOC. In the mean time head on over to Voltage on Main Street. They got a lot of cool stuff.