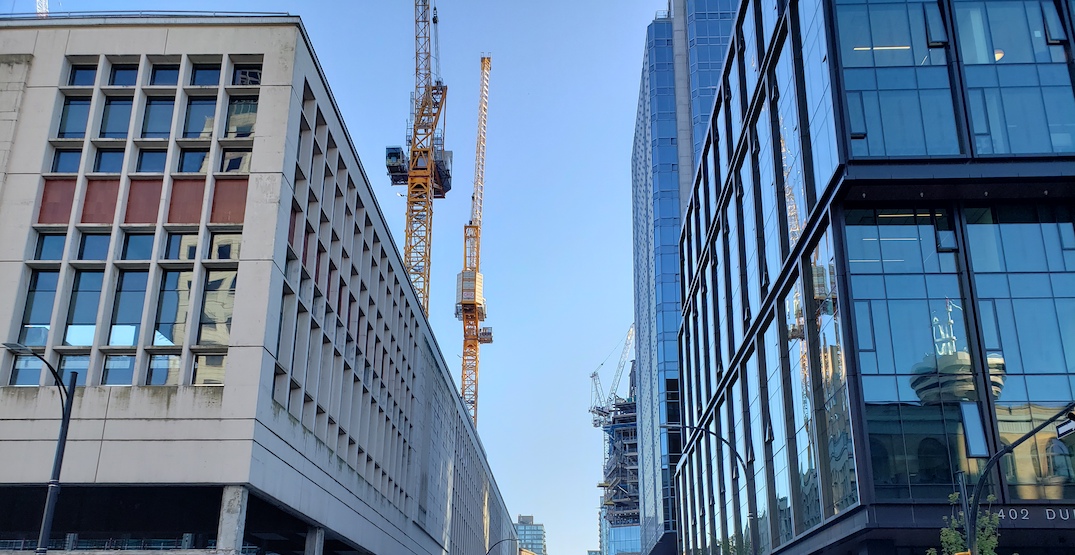 Construction progress on July 18, 2020 of the office space redevelopments of The Post, Deloitte Summit, and 402 Dunsmuir Street. (Kenneth Chan/Daily Hive)

Despite the economic and workplace impact of COVID-19, the office vacancy rate in Vancouver remains exceedingly tight.

A new market update report by CBRE for the third quarter of 2020 shows the office vacancy rate in downtown has increased just slightly to 4.6% — up from 3.3% in this year’s second quarter.

Spaces being subleased are generally minor offices of smaller companies. The sublet portion accounts for 39% of the total vacant space.

“The market’s record tight leasing fundamentals at the onset of this global economic downturn has meant that Vancouver continues to be one of North America’s tightest and most competitive downtown office markets,” reads the report.

In the suburban market, the office vacancy rate is 6.3%, with 1.03 million sq. ft. directly vacant and 463,774 sq ft available for sublease. Just three of the nine currently marketed suburban sublet availabilities greater than 20,000 sq ft were introduced since June.

The suburban vacancy rate increased by only 0.3% compared to the previous quarter.

The overall regional office vacancy rate is 5.4%, up from 4.6% in the second quarter.

The downtown, suburban, and overall regional market vacancy rates are still well within healthy territory, as a “balanced” office vacancy rate is considered to be 8% and under. In deep contrast, downtown Vancouver’s office vacancy rate reached a low of about 14% in the early 2000s from the tech bust. 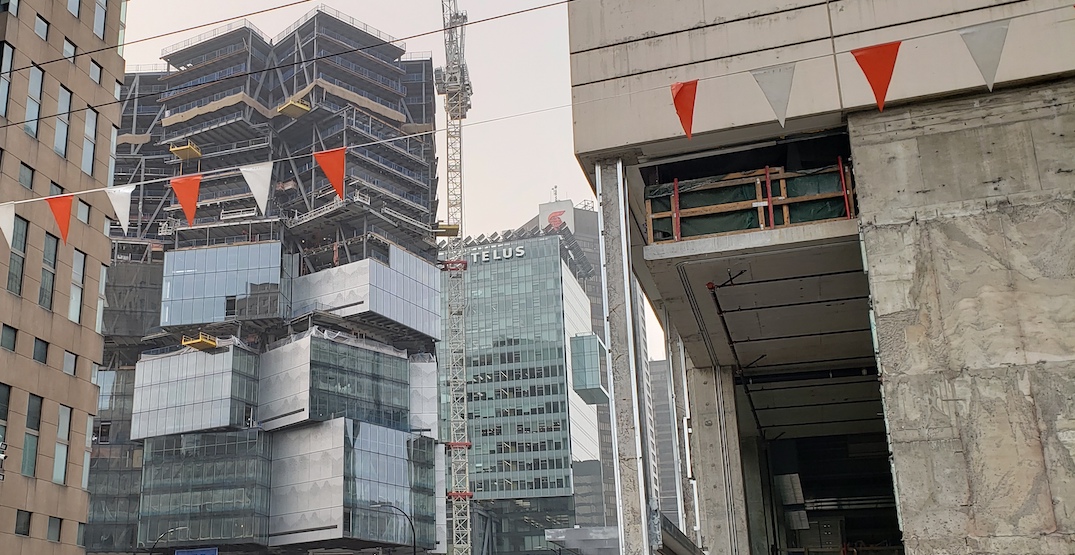 Construction progress on September 17, 2020 of the office space redevelopments of The Post and Deloitte Summit. (Kenneth Chan/Daily Hive)

The average regional rent for Class A office space decreased slightly over the first two quarters of the year, before experiencing a notable spike in the third quarter from $28.95 to $31.99 per sq ft.

With the region’s industrial space market, the vacancy rate dipped by 0.1%, narrowing to 2.8%. It is a continued sign that demand is still outpacing supply, even with 1.12 million sq ft of positive net absorption.

“Strong leasing velocity over the last few years has resulted in prime logistics warehouse space becoming increasingly difficult to find,” reads the report, noting there has been a 1.1 million sq ft average set over the regional market’s 28 quarter record run of uninterrupted absorption.

Of the five current availabilities larger than 100,000 sq ft, just one offers immediate occupancy suitable for distribution and logistics-related uses.

Average industrial rents this year to date have been relatively stable with little change, unlike the steep climbs of the quarters of previous years.