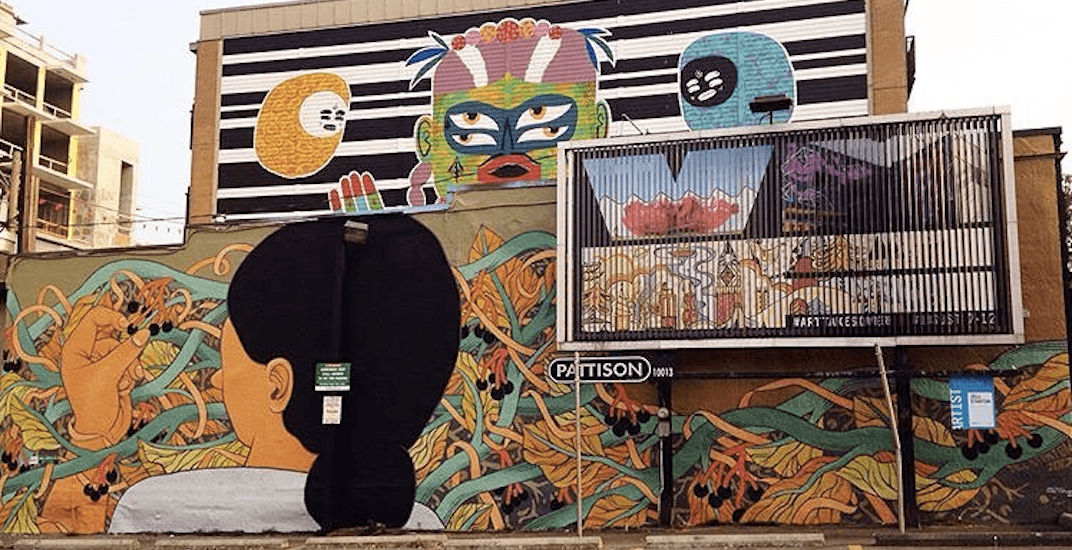 "Blue Vines" by Jill Stanton at the corner of Main Street and Broadway in Mount Pleasant was funded by Daily Hive. (vanmuralfest/Instagram)

Vancouver has more colour than it did a week ago, and that’s not just because our long-missed blue skies have finally become visible again.

The Vancouver Mural Festival returned to Vancouver for its second year, and over the past week dozens of new murals went up on walls around Mount Pleasant.

Among them is Jill Stanton’s Blue Vines, a piece sitting above the parking lot at Main and Broadway—better known as the easiest place to park when getting Noodle Box on Main Street.

Blue Vines was completely funded by Daily Hive, and Daily Hive CEO Karm Sumal said that the choice to support the Vancouver Mural Festival was a no-brainer.

“The murals—and street art in general—have always been something that I’m an advocate for,” Sumal said in an interview. “I think it brings in community and I think it’s really important for a city to have [art] like this.”

Stanton’s mural depicts a a girl standing among the titular vines, picking a berry from the foliage.

It’s done! Blue Vines, 2017. Thanks so much to @vanmuralfest for having me! . . #mural #murals #streetart #vancouvermuralfestival #arttakesover #streetart #handpainted #yvr #canadianartist

“I like to depict organic forms, mainly plants, in my murals; I use them to play with scale on large walls, shrinking the viewer down and making humble plants into giant, towering masses,” Stanton wrote for the mural’s description on vanmuralfest.ca. “I want my murals to mimic the feeling one gets when standing in a vast forest or other green space and being in awe of the depth and power, but also incredible beauty and sense of calm, intrinsic to nature.”

“We had no idea what it was going to look like,” Sumal said. “I saw it that day and I loved it. I thought it was a great mural; it played well with the mural that was above it.”

With the success of the festival, Sumal hopes that more urban art will find its way into Vancouver.

“There are so many great artists in this city that we don’t celebrate, and they have to go outside of Vancouver to be celebrated and revered,” Sumal said. “I know Vancouver relies a lot on it’s natural beauty, but I think if forgets that there’s a lot of people […] who come here to urban centres expecting a certain urban style to also be there, and I think City Hall and a lot of the politicians are slowly realizing that.”

A mural festival may seem a step away from the norm for Vancouver, though Sumal sees it as a step in the right direction for artists in the city.

“Why not create a safe space for artists to create and open up our alleyways? To get the discussion going and to take away some of the stigma around graffiti and street art. I think it’s a win, so props to the City of Vancouver for not being so stiff and boring and safe.”

Andrea Curtis, Director of Operations for the Vancouver Mural Festival, said in a phone interview with Daily Hive that putting together an event like this proves what can be accomplished in this city.

“We’ve been so used to the moniker of ‘No Fun City’ and hearing things like ‘that would never happen in Vancouver’ for so long,” she said. “So [it’s exciting] that we can actually stand back and say, ‘Well you know what, thing are actually happening in Vancouver.’ There’s really incredible, talented people in Vancouver, and we’re shining a light on all of that.”

“The city was incredibly supportive. I think that the city at this moment in time is really ready to think creatively about how we can make this happen.”

Curtis said that while they are just finishing up the clean up from this year’s festival, they already have their mind on what’s to come.

“We’ve definitely seen the success of it and we can report that we believe at least 80,000 people showed up,” she said. “It’s definitely grown from last year, and it’s becoming an event in Vancouver that will continue to grow.”

Sumal notes that there are still a lot of bare walls in Mount Pleasant, and he is eager to sponsor a third Vancouver Mural Festival, given the opportunity.

“As long as Vancouver Mural Festival wants us to sponsor a wall, and maybe get a little more involved, then I’d be over the moon happy to do it; I think it’s awesome,” he said. “It’s something that, if you come to our office, you see it; the art is part of who we are, and the street urban culture is who we are, and this festival encompasses all of that on a mass scale; that’s us, in a nutshell.” 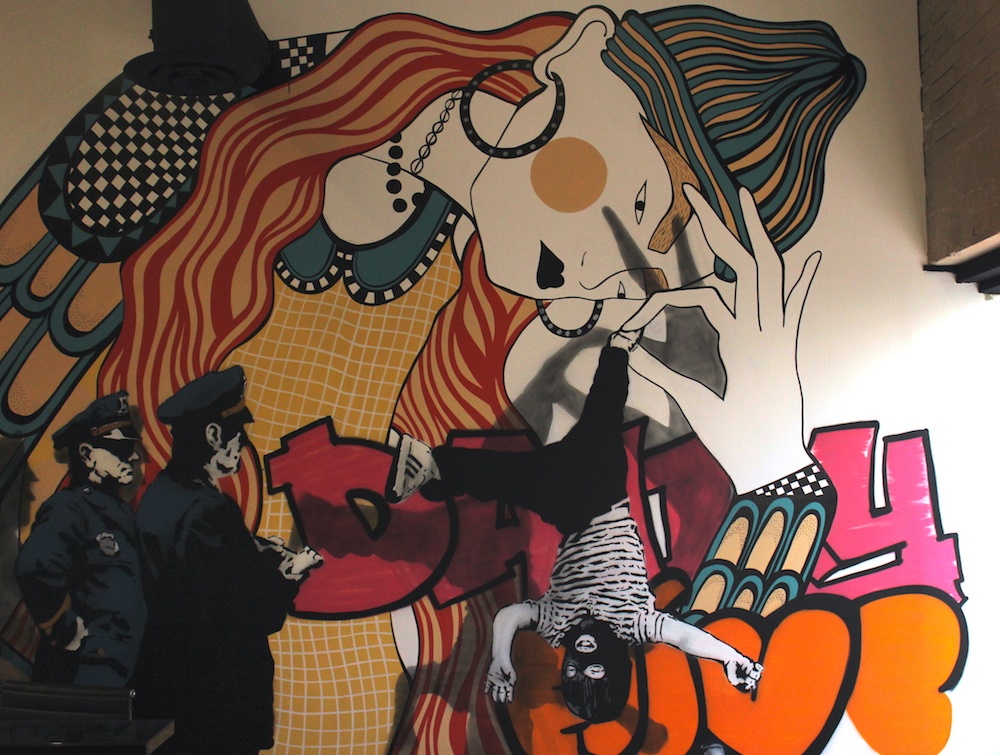 The mural painted at the entrance of Daily Hive’s offices in Yaletown. (Chandler Walter/Daily Hive)