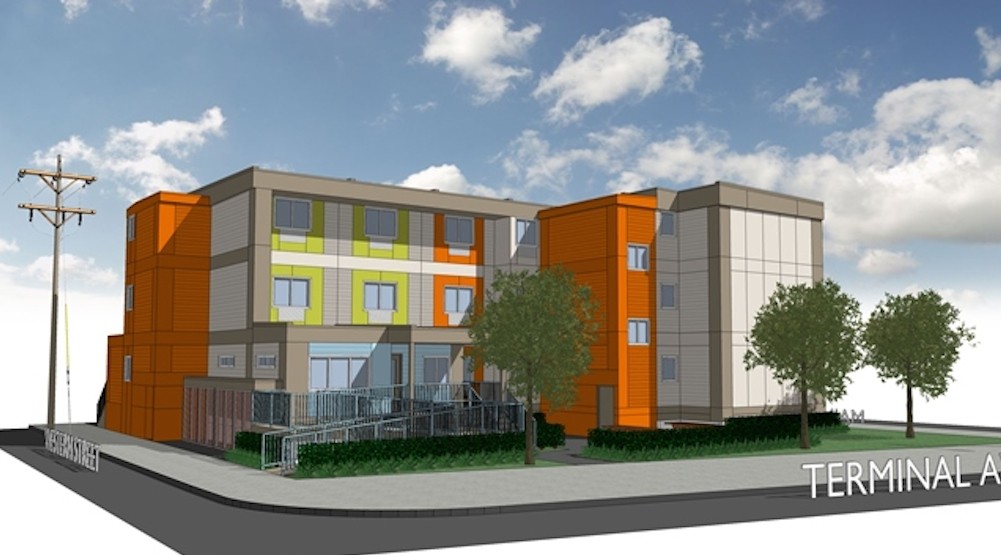 The City of Vancouver is one big step closer to building its first temporary modular housing project now that a contractor has been selected.

In a release, the municipal government says it has selected Calgary-based Horizon North to construct a 14,875-square-foot, three-storey building with 40-single occupancy suites on a vacant site at the intersection of Main Street and Terminal Avenue.

There will be self-contained bathrooms and kitchens, individual climate control, and private living space, in addition to shared indoor and outdoor amenity space and a central library. Several units on the ground floor will be wheelchair accessible suites.

“Our goal for this project was to provide an innovative building solution for the City of Vancouver, maximizing the number of suites available and delivering on an expedited timetable,” said Rod Graham, President and CEO of Horizon North, in a statement. “We are honoured to be a part of this key project that will deliver temporary housing solutions to those who need them quickly, efficiently and affordably.”

Currently, the site is being used as a community food garden. Five companies were shortlisted for the pilot project, which builds temporary housing on unused land that will be developed at a later time. The structure is modular, allowing the structure and foundation to be dismantled and reassembled at another location once permanent development plans have been arranged for the site.

Temporary housing allows the City to increase affordable housing supply quickly and cheaply. Construction on the Main Street project, slated to cost $3 million, will begin in early 2017 for a completion in the spring. Individuals who are deemed on low and fixed incomes through the BC Housing Registry will be eligible to reside at the building.

“We’re pleased to get this pilot project off the ground and to start building temporary modular housing on vacant sites awaiting development,” says Mukhtar Latif, Chief Housing Officer and CEO of the Vancouver Affordable Housing Agency, the City of Vancouver unit that carries out City Council’s housing goals. “We received many creative ideas on how to develop temporary modular housing and this proposal was the most innovative with every part of its construction being able to be used on another site in the future.”

The City initially suggested that shipping containers could be used to construct the two buildings in the pilot project, but this project will use other reusable and functional materials instead. The other temporary modular housing location will be built on the roof of a multi-storey parkade facing the alleyway on 1060 Howe Street, a below-market housing complex that was formerly the Bosman Hotel.

Earlier this year, the municipal government offered the federal government $250-million worth in land across the city in exchange for $500 million in funding for new social housing projects.