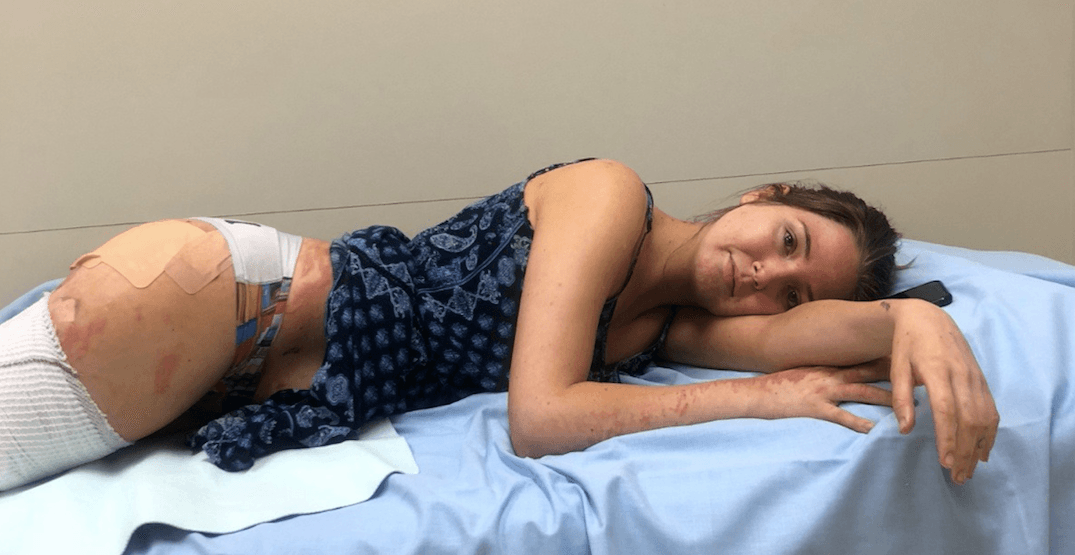 Story contains images some may find graphic. Discretion is advised.

After what she says was one of the “one of the most traumatic and terrifying moments” of her life, a 22-year-old international student and freelance model living in Vancouver is recovering  in hospital from severe burns all over her body, after a recent photoshoot gone wrong.

On June 13, Robyn-Lee Jansen responded to a freelance modelling job, “where the photographer wanted to work with fire – behind me from a distance – in order to create some awesome shots.”

While she didn’t know the photographer personally prior to the shoot, Jansen said he “had been vouched for” by a few other models and had “assured” her the shoot was safe.

The photographer also told Jansen he “had never had a problem with fire shoots in the past.”

The shoot started fine, but things took a turn for the worse when it came time to incorporate the fire element.

“The photographer seemed rushed, and his family had called multiple times, as we were running a little late,” said Jansen. “He proceeded to work with fire behind me, and then yelled, ‘stand still, this part gets tricky.'”

Jansen said that before she even had a chance to ask for any further explanation, “he squirted a bottle of liquid paraffin oil while standing closer to me.”

The next thing Jansen knew, “I was up in flames.” 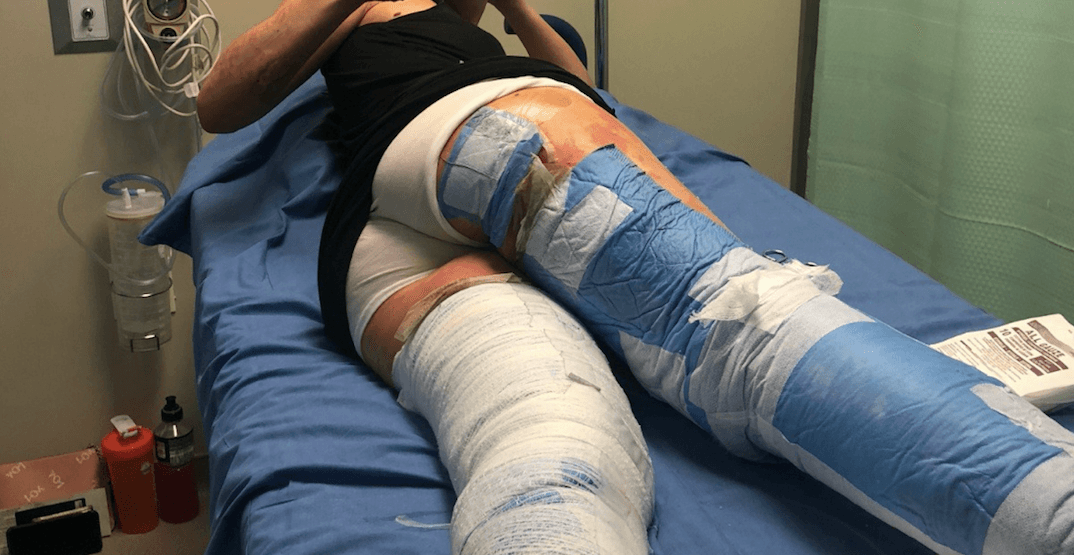 She immediately managed to “drop duck and roll into a puddle and get the flames out,” but the damage was already done.

Then, the photographer insisted he drive Jansen – who was in shock at this point – to the hospital himself. “In a panic, he made me wait until he was finished packing up all of his camera equipment before he would take me,” she said.

Jansen said she has been left with second degree burns over 25% of her legs and first-degree burns on her anterior legs, hip, back, and right arm, as a result of the incident.

Asked about a recovery timeline, Jansen told Daily Hive that doctors have given her two weeks to heal, and “if I am not almost fully healed by then, I will have to undergo skin grafts.”

Following this, “if I can get into surgery right away that would be another three to four weeks.”

But that estimate, she added, “doesn’t include the time it will take for the scarring and skin pigment to normalize.”

Although there are no infections and doctors have told her she is healing well, Jansen said she’s been informed that “any healing done on my own after three weeks leaves an 80% chance of scarring.” 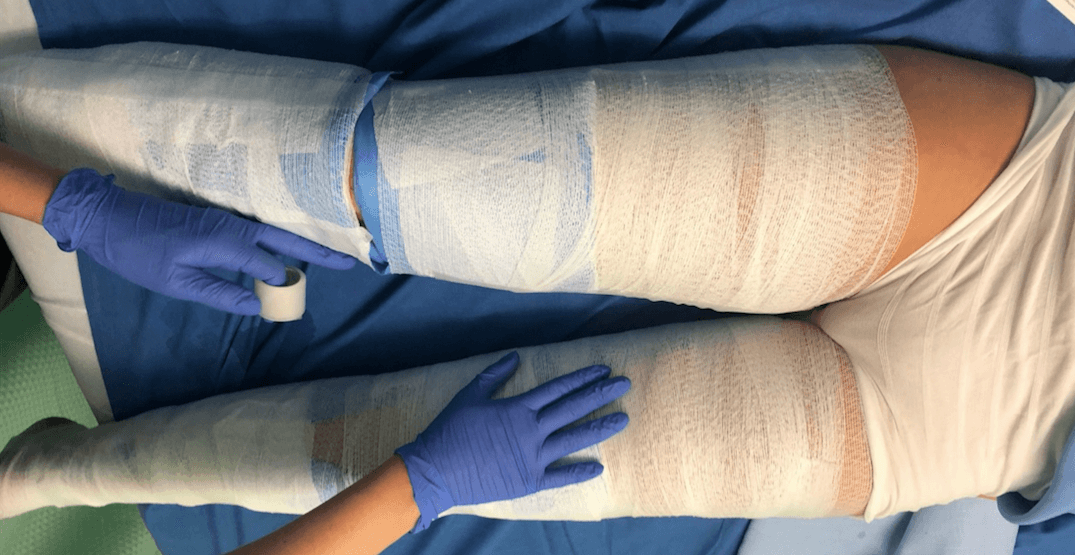 The incident has also left Jansen currently unable to walk, “let alone go about my job as a model with all my wounds and extreme pain.”

As a result, she has had to cancel all her paid jobs for the next “two to three months.” In addition, she said, “there is still the issue of severe scarring. All of these things will hinder my ability to model.”

A warning to other models

Reflecting on the “horrible and horrific” incident, Jansen said she believes the whole situation “was caused due to negligence and recklessness on the photographer’s behalf.”

She hopes that by sharing her story other models will learn from her experience, and properly vouch for their own safety prior to any photoshoot.

“I know a lot of younger models are very trusting, and slow to voice their opinion,” she said. “I would like all models to be more demanding and assertive.”

If the photographer – or brand – “really values” the model they’re working with, “they will happily run through all tricky situations before hand so you are sure and confident of what you are doing.”

And if they don’t seem like they are willing to negotiate – or  threaten to find another model – “then that’s a red flag.” 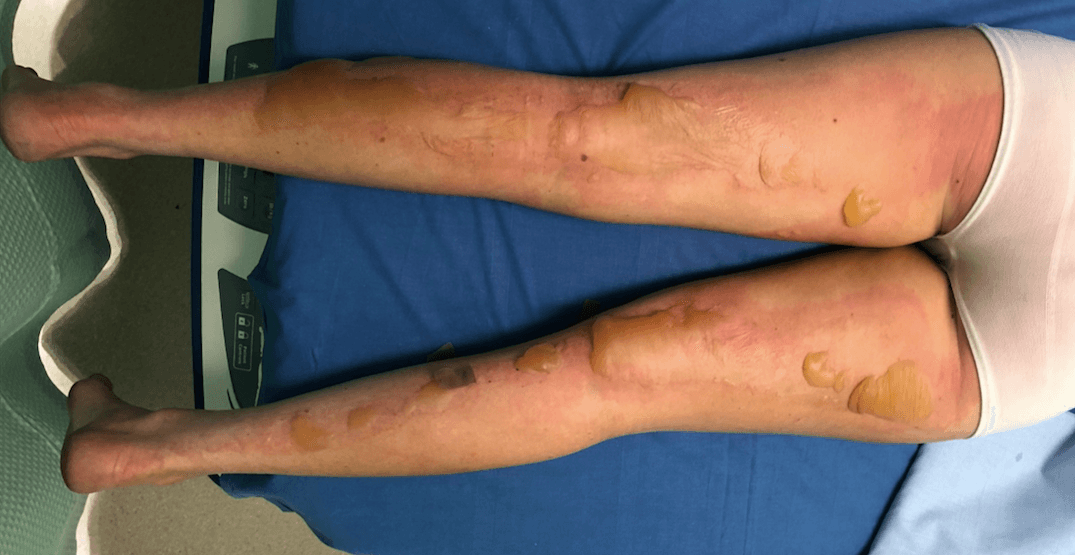 “Don’t trust other people’s words when going into a risky shoot,” she said. “Demand that there be safety procedures in place.”

If the photographers can’t provide or guarantee this, she said, “then just don’t do it. It’s not worth your time and safety.”

It’s a lesson Jansen had to learn the hard way, but one she says she’ll never forget.

“Never again will I accept anything where I could possibly be injured again, no matter how safe the photographer says it is, or how many other models he has worked with,” she said.

While she continues to recover one day at a time, a GoFundMe page has now been created to assist Jansen with financial issues surrounding the whole situation.

Seeking legal help, paying her bills, recuperating lost wages, and dealing with extra medical expenses not covered “is going to be tough especially as an international student,” she said.

While she “doesn’t usually like to ask for help,” Jansen said anything is appreciated during this “distressing” time. “I am away from all my friends and family, and my boyfriend has taken off work to take care of me.”

Financial assistance “would really help go a long way for the next few months of care and recovery,” she said. “It will be a long road to recovery and I am hoping long term I won’t be left with too much scarring.”