A mechanic shop in Vancouver is giving a car to a needy person just in time for Christmas.

Stan’s Transmission Centre has a 1991 Plymouth Sundance that has served as a loaner car for the shop for more than 20 years. Owner Jim Lasher told Vancity Buzz it wasn’t being used anymore, so they decided to make someone’s holiday season by giving it away.

“Looking at the car, if we let it sit any longer, it’s garbage. You can’t let cars sit. So we decided to sell it and then it was like – Christmas is coming, how about we give it to someone,” Lasher said.

“One of the employees was asking for it possibly for his daughter, another one, his sister needs a car, so he was asking for it. So it was like – who do I choose? And then I said ‘hey guys, how about if we give it away at Christmas? Try to find a needy family.'”

The transmission centre posted a picture of the car to their Facebook page and asked people to nominate someone in need. 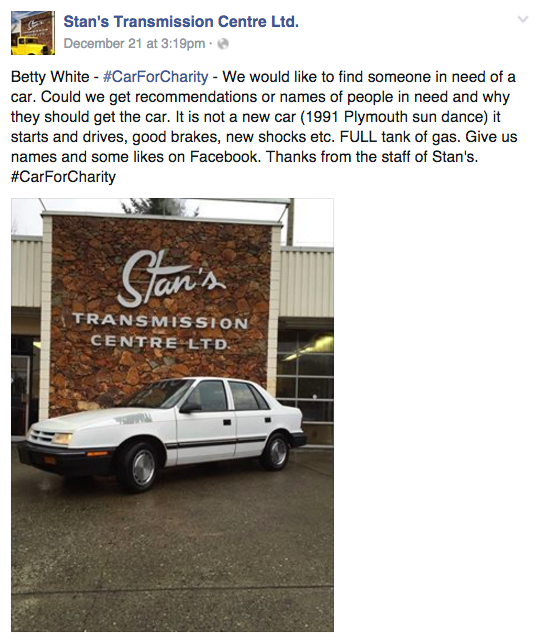 Lasher said people have been responding in droves. Comments on Facebook show there’s many deserving people who need a car to get them from point A to point B.

“I nominate my son Geoff. He is a hard working (works two jobs) single Dad who has to take a bus and Skytrain with his little boy from Vancouver to Surrey for school three times a week. He has almost no time to himself due to caring for his son and working 60+ hours a week but never complains. He’s such a great guy and a really loving Dad,” reads one comment under the thread.

“I would hope you consider giving this car to a single parent. Doing the hardest job in the world is pretty tough. I don’t know anyone who is in need but my vote is a single mom in need be top of the list,” reads another.

Lasher admits the car isn’t anything fancy, but it’s reliable.

“It has 188,000 kilometres on it, and it starts every day and it goes. It’s one of those cheap beater cars when you’re young with no money that you love because it always went and you didn’t spend much money on it to keep it going.”

“That’s why we didn’t want to scrap it – it’s been too reliable for us,” he said.

With the overwhelming response, Lasher said they are considering making this a yearly Christmas event.

The chosen candidate will likely be selected at 3 o’clock today, December 23, so the car arrives just in time for Christmas Eve. If you think you know someone who deserves a nomination, comment on the thread on Stan’s Transmission’s Facebook page.