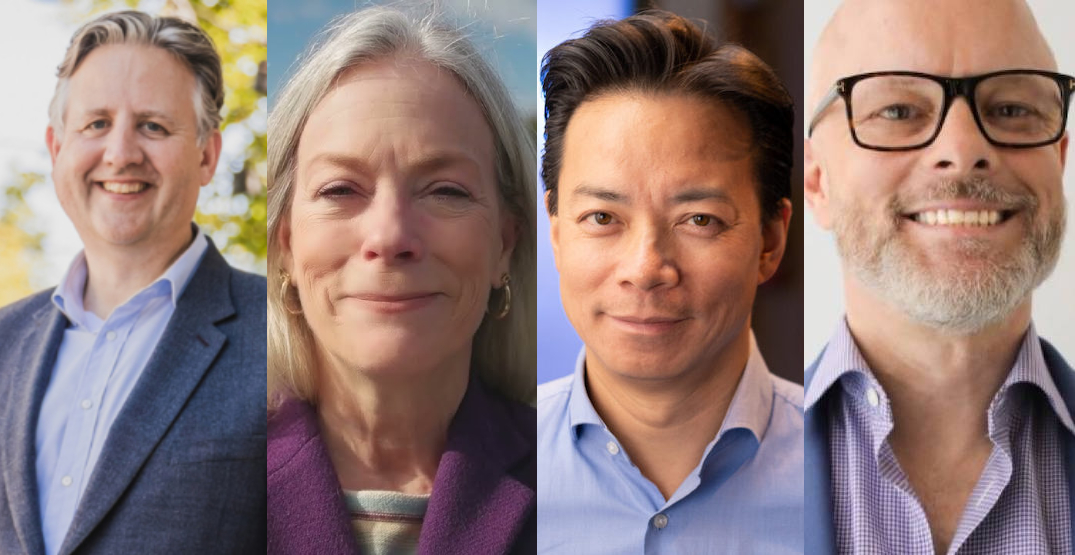 From left to right: Kennedy Stewart of Forward Together, Colleen Hardwick of TEAM, Ken Sim of ABC Vancouver, and Mark Marissen of Progress Vancouver. (party files)

It appears to be a relatively tight four-way race to be the mayor of Vancouver in the fast-approaching fall civic election.

According to a Mainstreet Research survey conducted in late July, mayor Kennedy Stewart, who is the incumbent running under his new Forward Together party, is leading in support by 17%.

He is trailed closely by TEAM candidate and current city councillor Colleen Hardwick at 13%, followed by Progress Vancouver’s Mark Marissen and ABC Vancouver’s Ken Sim each at 11%. The NPA’s John Coupar, who currently sits as a Vancouver Park Board commissioner, is hovering at 6%.

It is important to emphasize the differences between the candidates are considered thin, and that the survey has a margin of error of 4.2% 19 times out of 20.

Furthermore, 40% of respondents are still undecided on their preferred candidate.

But the survey suggests the centre-right and right-leaning votes are split due to the number of candidates within this segment of the political spectrum, whereas Stewart is essentially the sole candidate for the opposite side of the spectrum.

For the age group of 18 to 49, Stewart and Hardwick each saw similar proportions of support of about 15%, Marissen saw 12%, and Sim and Coupar each saw about 5%. This younger age group is more likely to have undecided voters than older counterparts.

When it comes to voting preferences based on education, university-educated respondents have the greatest preference for Hardwick (19%), followed by Stewart (18%), Sim (11%), Marissen (9.5%), and Coupar (5.3%).

Middle-income earners, $50,000 to $100,000 annually, are also more likely to prefer Stewart and Hardwick over the other candidates.

When asked what is their opinion of Vancouver’s current mayor Kennedy Stewart, a majority disapprove of him, with 33% “strongly disapprove” and 27% “somewhat disapprove.”

Most respondents also believe the City of Vancouver is heading in the wrong direction, with 35% “very dissatisfied” with their municipal government and 25% “somewhat dissatisfied.”

The need to create affordable housing is the most important issue facing the city (39%), and this is followed by decreasing municipal taxes (23%), increasing/improving municipal services (16%), improving public transit (13%), and roads/infrastructure (9%).

About two-thirds (64%) of respondents think the municipal government should allow more homes and apartment buildings in the area where they live.