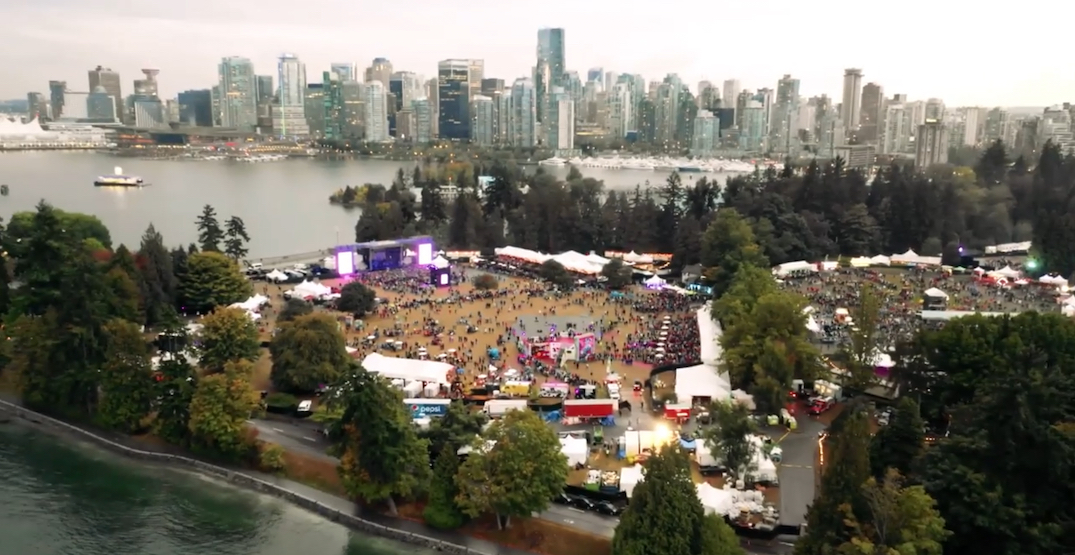 Skookum Music Festival was held in 2018 at Brockton Oval in Stanley Park, backdropped by the downtown Vancouver skyline. (Brand Live)

Restoring a can-do attitude, a sense of civic pride, and a positive business environment are key priorities for Mayor Ken Sim and his ABC Vancouver party majorities within Vancouver City Council and the Vancouver Park Board.

In his first annual “State of the City” address to the Greater Vancouver Board of Trade and the business community Tuesday afternoon, Sim presented his four-year vision of refocusing the City of Vancouver’s attention and priorities towards bringing out a “renewed swagger.”

“I want to get across that we’re going to create an environment where we’re the best city on the planet, and that we’re open for business again. Despite the challenges we have, and we’ll talk about and work towards addressing them, this is a world of opportunity,” said Sim in an interview with Daily Hive Urbanized prior to his address.

The sense of optimism currently found in cities like Austin and Miami, which have both caught the wave of economic growth, fuelled in large part by tech, is something to aspire to.

He recollected the momentum Vancouver gained from hosting the 2010 Winter Olympics, but for a myriad of reasons, including self-afflicted factors, it was short-lived and squandered.

“Do you remember that feeling during and right after the Olympics? There was a buzz around the city, and we felt that we could do whatever we wanted and it was okay to be the best in the world. We were so proud. You wore Vancouver on your sleeve like a badge of honour. We need to get there again, and we will get there again, and it’s going to take a lot of hard work,” said Sim.

He paints a picture of wanting the best of both worlds — the best of urban experiences when it comes to creating vibrant neighbourhoods and catalyzing a world-class scene of restaurants, nightlife, festivals, and events while upholding the existing strengths of the city’s natural beauty.

Sim says the aim is to use these next four years to gradually ramp up towards being a very different city — one that is markedly more fun — by the time Vancouver is showcased again to the world when it co-hosts the FIFA World Cup in 2026, the same year Vancouver marks the 40th anniversary of the Expo ’86 World’s Fair.

One of the things City Council will be looking to address in the near term will be the obstacles the municipal government imposes on events. Event organizers of mass events, in particular, have frequently commented on growing City-mandated costs like policing, crowd control and traffic management, and the complexity of permitting.

High City-related costs and restrictions on event organizers are a barrier for keeping long-running events an annual tradition — an added layer of challenges to the impact of market inflation on costs, supplier and workforce shortages, and Vancouver’s traditionally difficult sponsorship market.

After pandemic-time health safety restrictions were lifted on events in early 2021, a number of major events were downsized, while others were outright cancelled, including the Canada Day fireworks, Santa Claus Parade, and New Year’s Eve fireworks, and the false attempted start of FIA Formula E.

Last week, organizers of Vancouver Folk Fest announced the cancellation of their 2023 event, which may mark the potential permanent cancellation of an annual event that first began in 1978. The not-for-profit organization behind the event says cost increases of 30% and 50% over 2022 have led to a yearly budget increase of at least $500,000 moving forward, a cost it cannot fill.

“We have to make it easier for events to be hosted in our city,” said Sim, emphasizing that he is taking a closer look at the factors controlled by the City. “If we can get events permits faster and reduce the costs, we’ll start making progress in our journey to have a fun city again.”

When asked whether he would support bringing the FIA Formula One race to Vancouver, he says he would encourage promoters to propose new events, including making Vancouver the second Canadian stop for the premiere international car race.

“The role of the City isn’t to actually identify and rule out events. Our role is to encourage groups like Formula One to come here and break down barriers,” he said. “If it makes sense, it’s our role to make sure that we help make it easy for those events to not only want to come here but also succeed here.”

Fundamentally, creating a vibrant and fun environment with major events and festivals forms a part of the equation for attracting investment and high-quality talent for local businesses.

Sim adds that he wants to promote Vancouver’s strengths in the emerging tech subsectors of virtual reality, augmented reality, virtual reality, artificial intelligence, blockchain, and quantum computing, as well as the long-held driver of the film, television, and animation industry.

“We’re actually punching above our weight in emerging industries, but people don’t know about it,” he said.