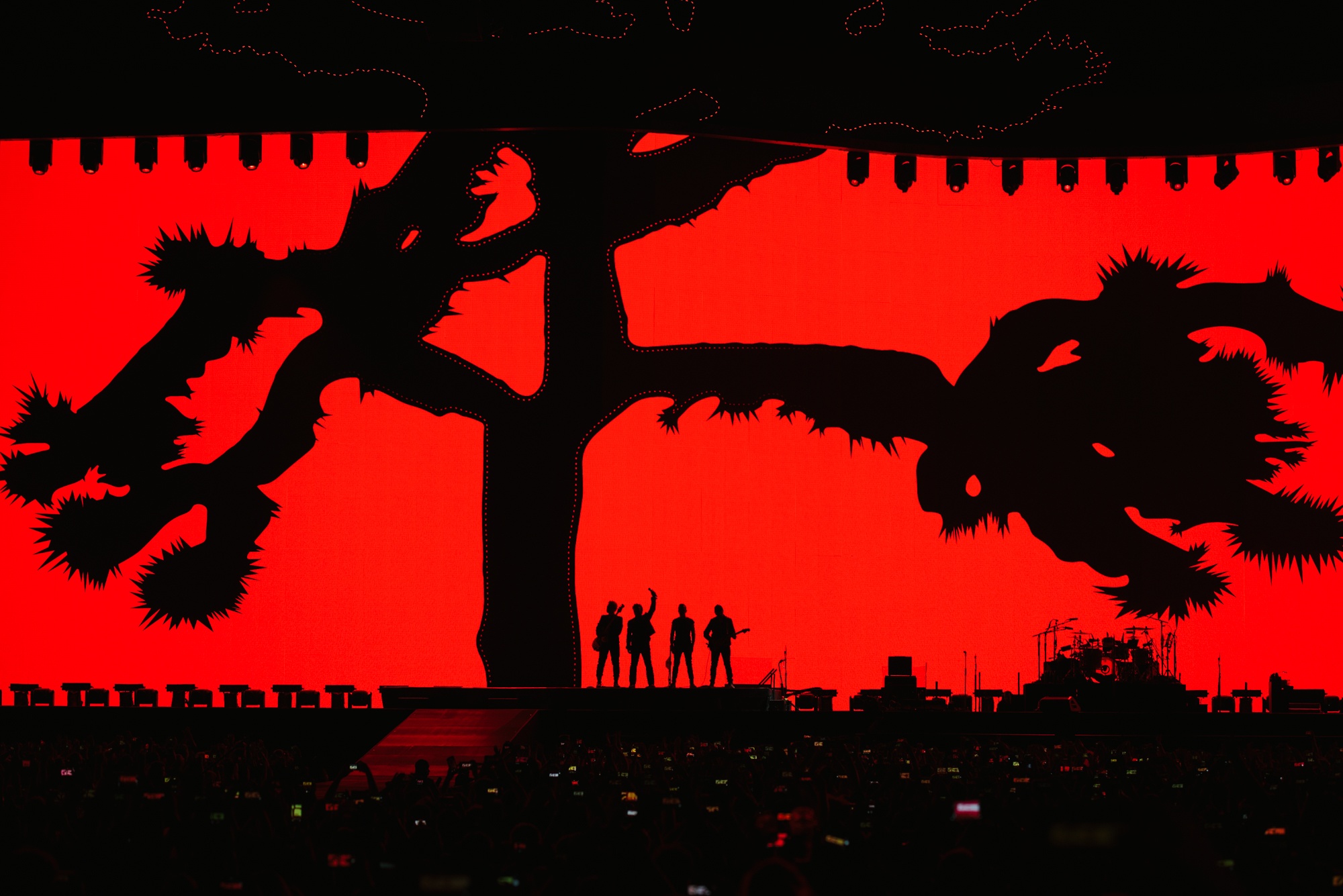 It was a beautiful night for U2 fans as the Irish rockers kicked off yet another world tour in Vancouver on Friday. But those who came specifically for an opening set by Grammy winners Mumford & Sons were literally left out in the cold, as major delays prevented thousands of ticket holders from entering BC Place on time.

You can blame the venue for initially opening just one gate for general admission ticket holders (fans began lining up as early as 5 am in hopes of getting up close and personal with the band), or blame U2 for using an anti-scalping system that required folks to present their credit cards before entry.

Whatever the case, a nasty scene erupted outside the stadium with distraught fans taking to social media in droves to voice their frustrations.

Not a great way for U2 to kick off their highly anticipated Joshua Tree Tour, which sold out within minutes of going on sale back in January. This year marks the 30th anniversary of their seminal Joshua Tree album, a pitch-perfect collection of songs that launched the band into bonafide superstardom. Adored by fans and critics alike, Tree topped the charts in 20 countries and won the Grammy for Album of the Year. 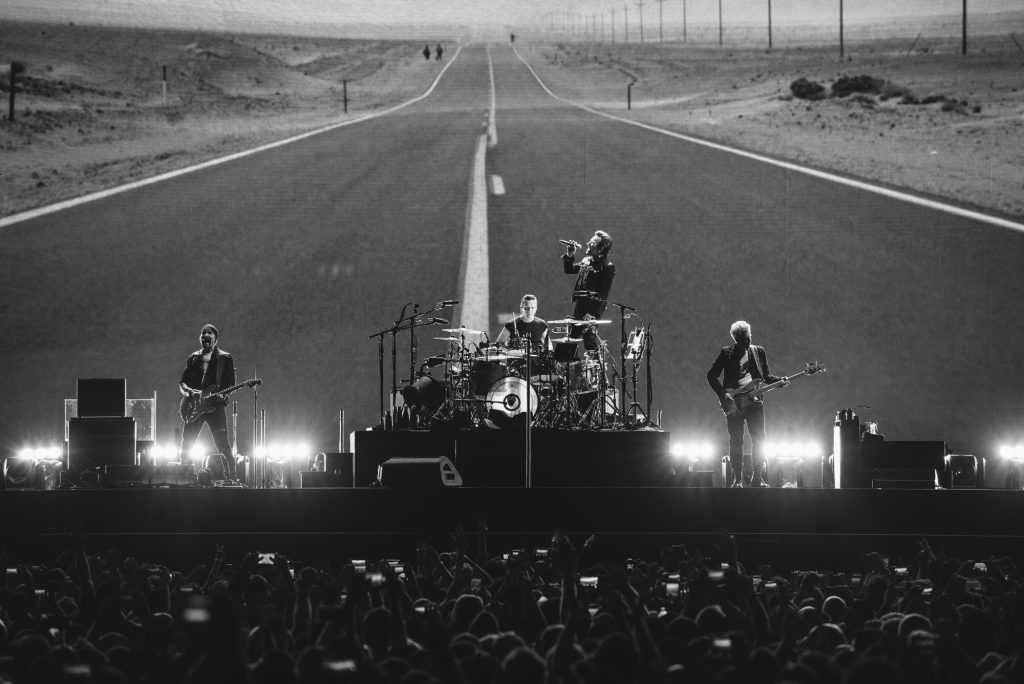 So what better way to celebrate than with a victory lap around the globe?

It’s always a pleasure to welcome U2 back to Vancouver – they’ve been playing here for decades, dating way back to 1981 when the fab four performed to a nearly-full Commodore Ballroom.

They took over the Pacific Coliseum for a month in 2015 to rehearse for their Innocence + Experience Tour, and this time around they moved rehearsals to BC Place, giving downtown residents a free U2 concert every day for weeks. Audio clips of those rehearsals were all over YouTube this week, making it easy to predict Friday night’s setlist ahead of the show.

The original Joshua Tree Tour kept Bono and the boys on the road for all of 1987, playing to almost three million fans and – deja vu! – selling out BC Place. And just as the band’s taste in clothes and hairstyles has evolved over the past three decades, so has their taste in support acts: Mumford & Sons were given the nearly impossible task of opening for U2 on Friday night, while Vancouver fans who attended the 1987 show were treated to a performance by Los Lobos of “La Bamba” fame. 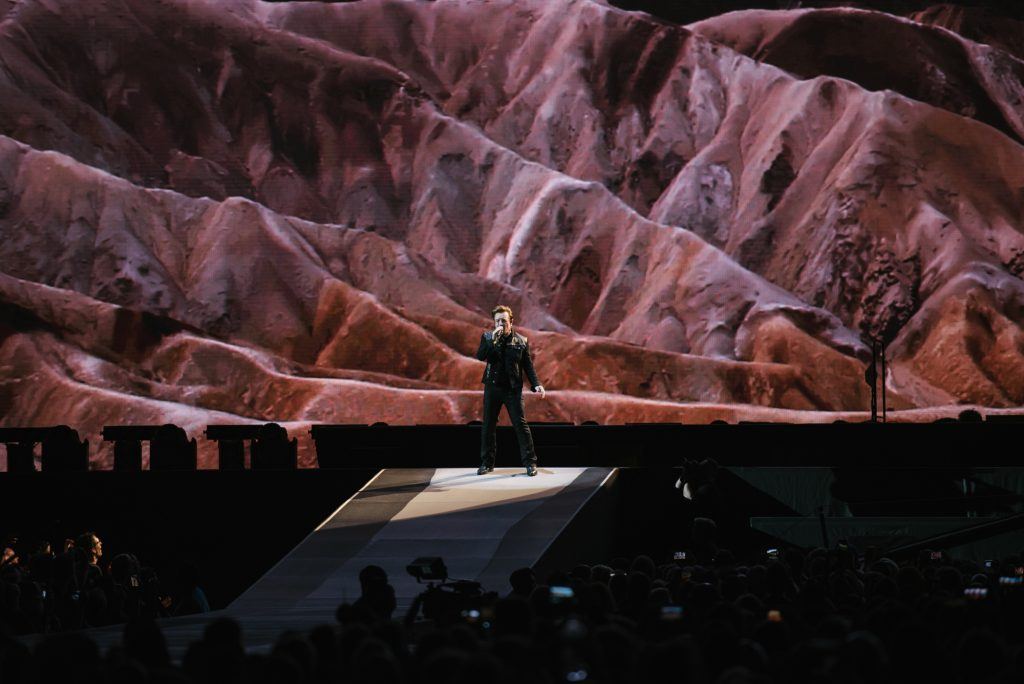 As previously mentioned, many attendees were forced to miss last night’s opening set because of line delays and I was stuck out there with them. For what it’s worth, Marcus Mumford & Co. sounded just fine from outside of the stadium, but watching a concert on Facebook Live while waiting to get in to said concert is kinda lame.

But all was forgiven when more gates opened up at around 8:30 pm, giving fans just enough time to grab their seats and breathe before U2 drummer Larry Mullen Jr. sat down at his legendary kit to start “Sunday Bloody Sunday”. He was followed on stage by bassist Adam Clayton, guitarist The Edge, and lead singer Bono, who just celebrated his 57th birthday two days ago.

As promised in the months leading up to the tour, the group tore through the entire Joshua Tree album in sequential order, but performed a handful of hits from other sources before and after it. The pre-Tree stuff was up first, as “New Year’s Day” and “Pride (In The Name Of Love)” got the mostly-over 35 crowd out of their seats, while post-2000 tracks like “Elevation” kept them dancing into the night. 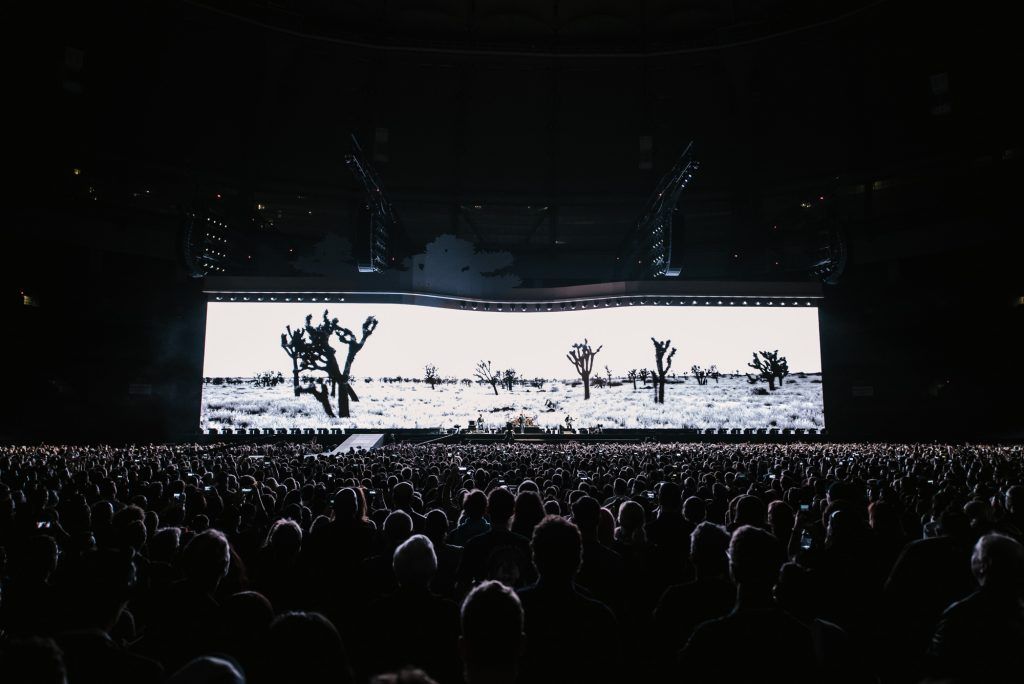 But fans shelled out top dollar to hear eleven songs in particular, and once all four band members convened on the main stage in front of the red screen with a giant joshua tree on it, sh*t got real.

The Edge began plucking away on guitar, teasing the opening notes of “Where The Streets Have No Name” before Bono (and 55,000 audience members) chimed in on vocals.

Some of the album’s tracks have been U2 staples for years – they’ve played “Where The Streets Have No Name” live more than 800 times while others, like “Exit” and “Trip Through Your Wires”, haven’t been heard in decades. Vancouver fans who attended Friday night’s show have bragging rights for life, as the band performed “Red Hill Mining Town” live for the first time ever.

Also in the mix were “With Or Without You” and “I Still Haven’t Found What I’m Looking For”, both of which topped Billboard’s Hot 100 chart, and “Bullet The Blue Sky” which featured Bono rapping the song’s traditionally spoken-word bridge. The singer thanked the audience “for listening to our new long player” after performing “Mothers of the Disappeared”, the album’s closing track. 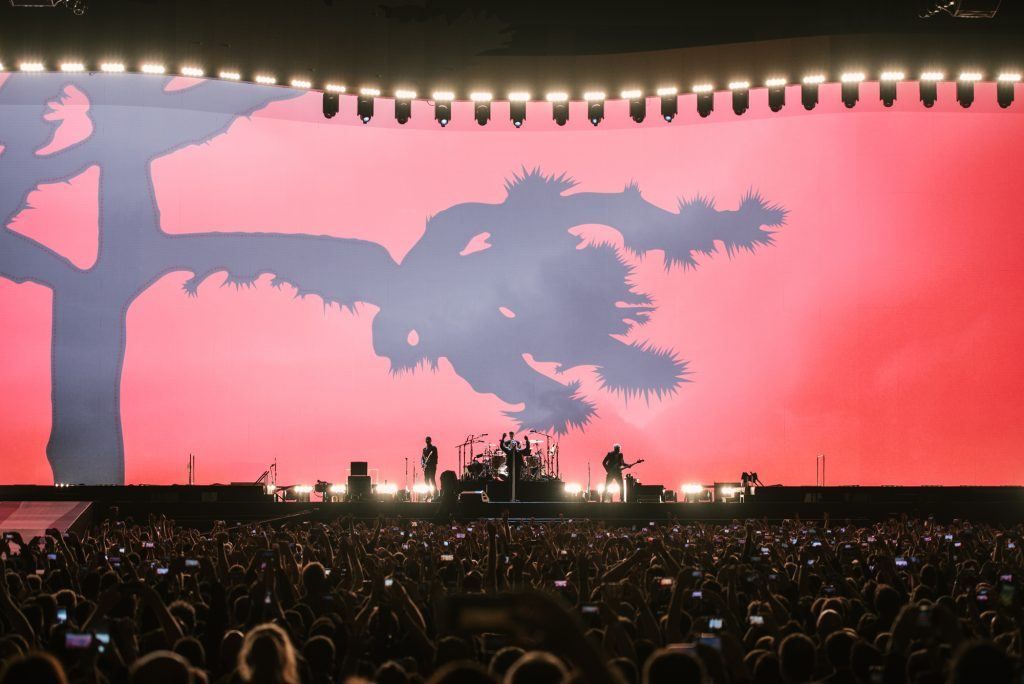 With the 80’s portion of their discography covered and only time for a few more songs, the guys skipped ahead to 1991’s Achtung Baby for “One” and then on to 2000’s All That You Can’t Leave Behind for “Beautiful Day”.

“When sisters around the world are in school like their brothers, it’s a beautiful day,” Bono said before starting the iconic song’s opening verse.

The band dedicated “Ultraviolet” to “the great women that we know” and performed the track while images of Rosa Parks, Sojourner Truth, and Angela Merkel flashed on the screen behind them.

“Our mothers, our daughters, the women on our crew, the women in the audience that we feel we know. Women who stood up and sat down for their rights. Women who resisted and insisted and persisted – you light the way,” Bono said.

The evening closed with a stirring performance of “Miss Sarajevo”, during which a giant flag featuring a child’s face was passed around the venue, and a lovely new song called “The Little Things That Give You Away” which is intended for an upcoming album.

So no Mumford & Sons, but for those of you keeping track at home, that’s two U2 songs to make their live debuts in Vancouver Friday night. 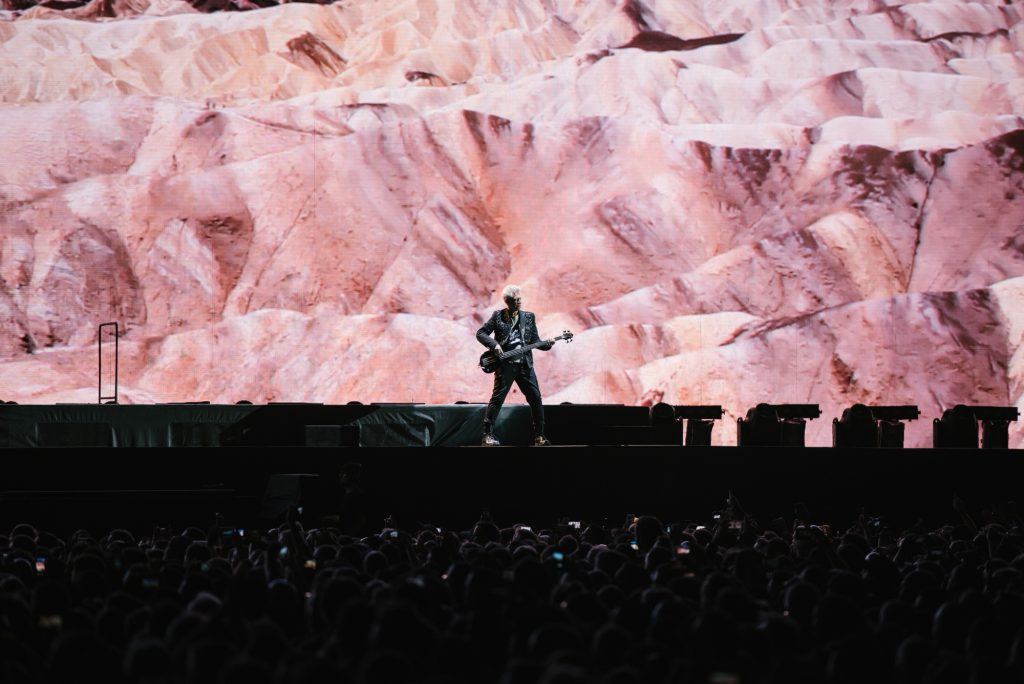 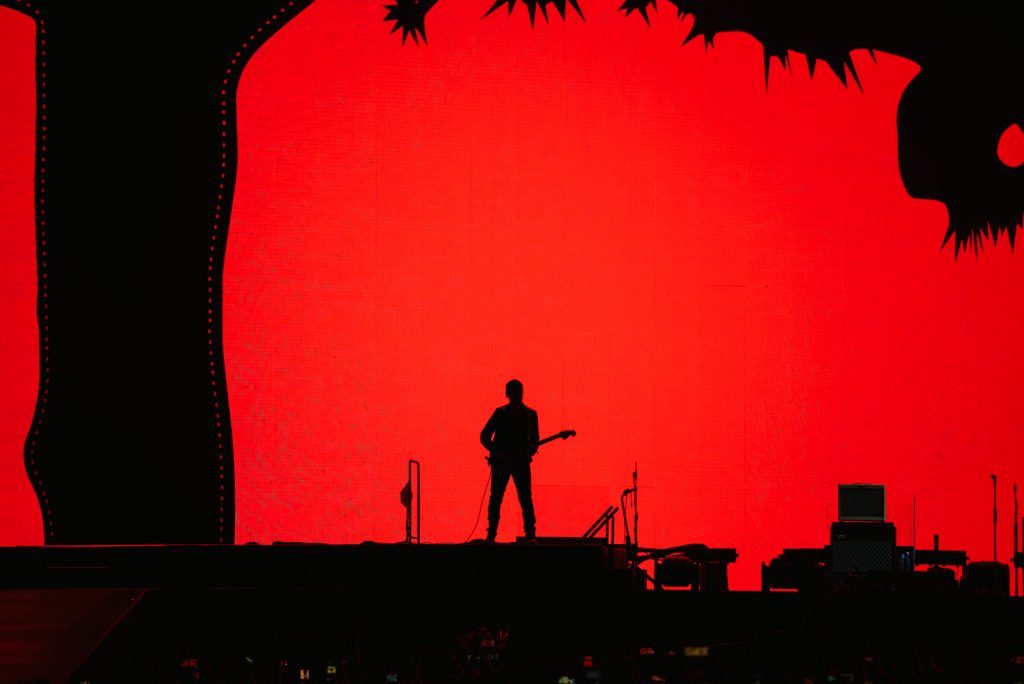 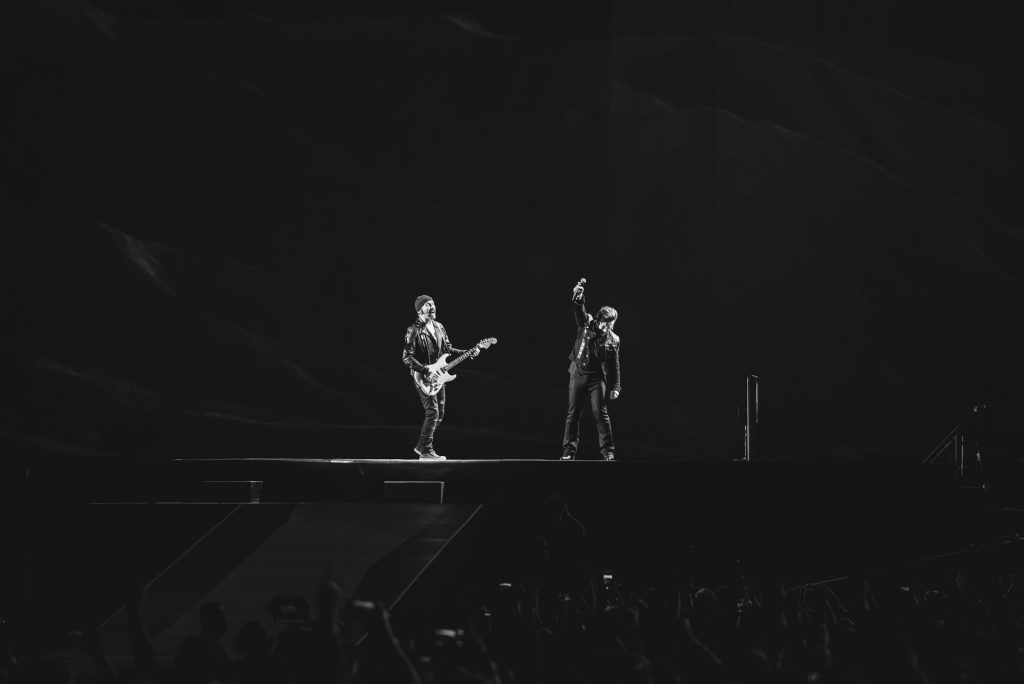 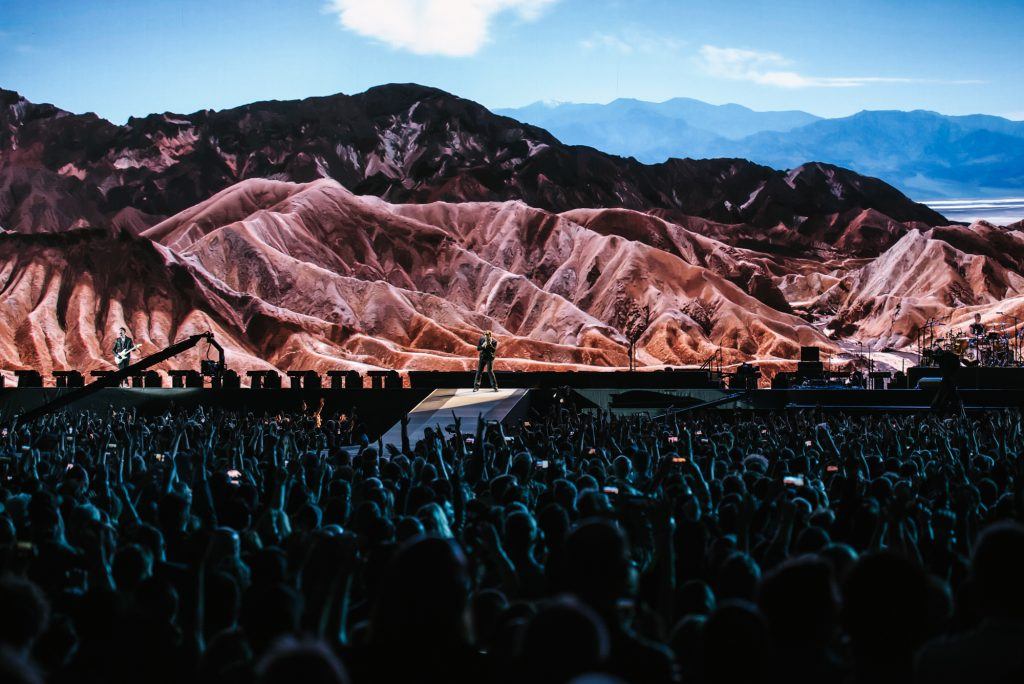 U2 performed at BC Place on May 12. Photos by: Brandon Artis Photography.