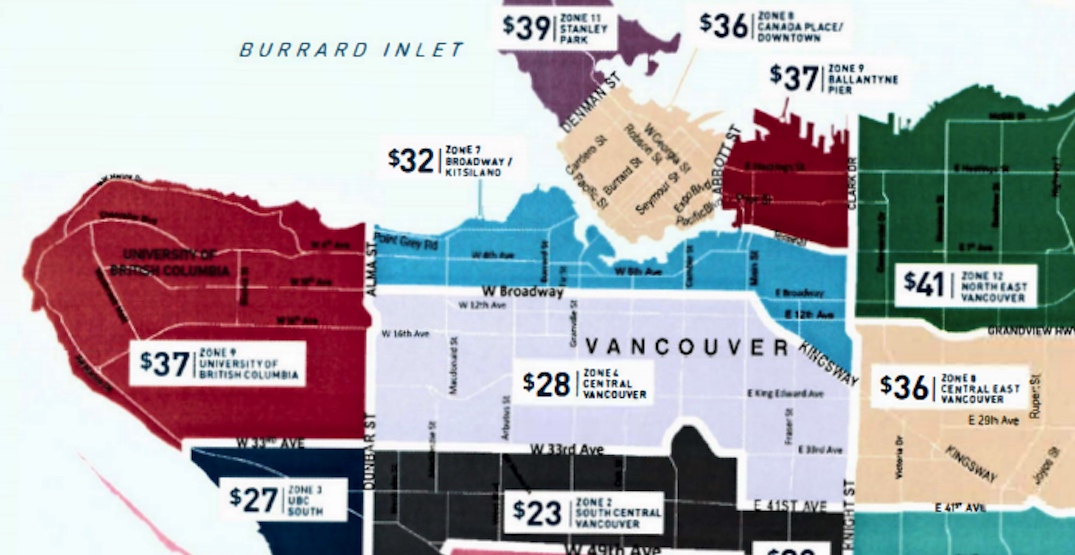 Over a dozen taxi companies are looking to increase their fares for trips originating from Vancouver International Airport (YVR), including the scheme of carving out new boundaries for smaller zone areas.

The zone-based, flat-rate fare system for inbound taxi trips from YVR first went into effect in late 2014, and there have been slight changes to the rates and boundaries since.

But the newly proposed changes, outlined in a joint application by the companies to the provincial Passenger Transportation Board (PTB), are the biggest changes to date, drastically changing boundaries and fare rates.

Currently, Zone 8 covers West Point Grey and Kitsilano north of West 4th Avenue, Fairview north of West 6th Avenue, a large portion of Mount Pleasant (north of 2nd Avenue, Kingsway, and the entirety of the False Creek Flats), and most of the downtown peninsula including the West End, Yaletown, and Chinatown. The rate for this large central area is $32.00.

The proposed boundary changes would create a new smaller Zone 7 with a rate of $32.00, covering West Point Grey, Kitsilano, Fairview, and Mount Pleasant north of West Broadway, as well as a smaller portion of the False Creek Flats.

The existing Zone 9 for Canada Place, Coal Harbour, and other areas along the Central Waterfront of downtown is currently a $36.00 rate, but under the proposed alterations this zone would be abolished. Instead, the downtown peninsula area framed by Denman Street to the west and Abbott Street to the east would become a new Zone 8 — including Canada Place, Coal Harbour, Central Waterfront, Yaletown, and the West End — with a rate of $36.00.

A new Zone 9 with a rate of $37.00 would be established, with boundaries framed by Abbott Street to the West, Terminal Avenue to the south, Clark Drive to the east, and the port waterfront to the north. 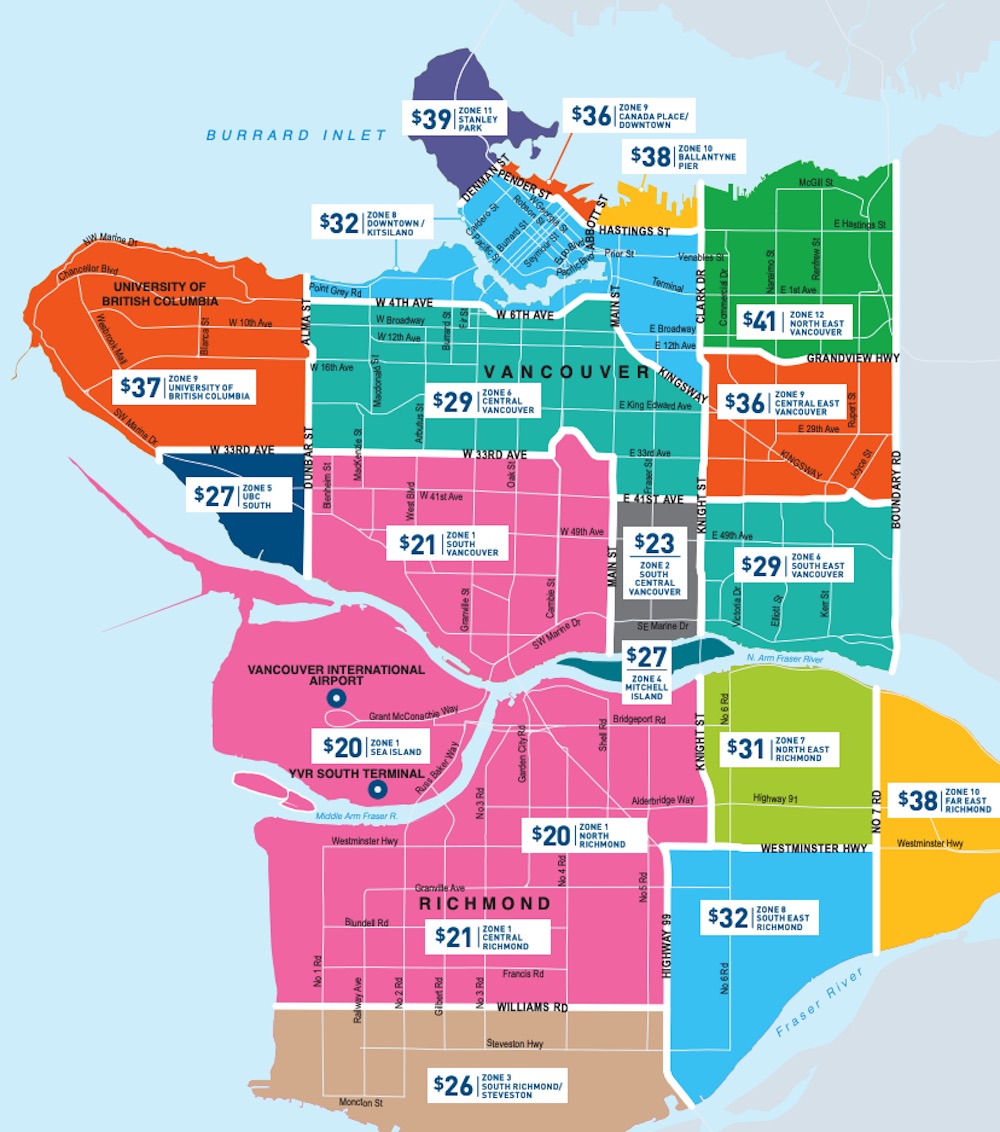 Proposed changes to rates and boundaries: 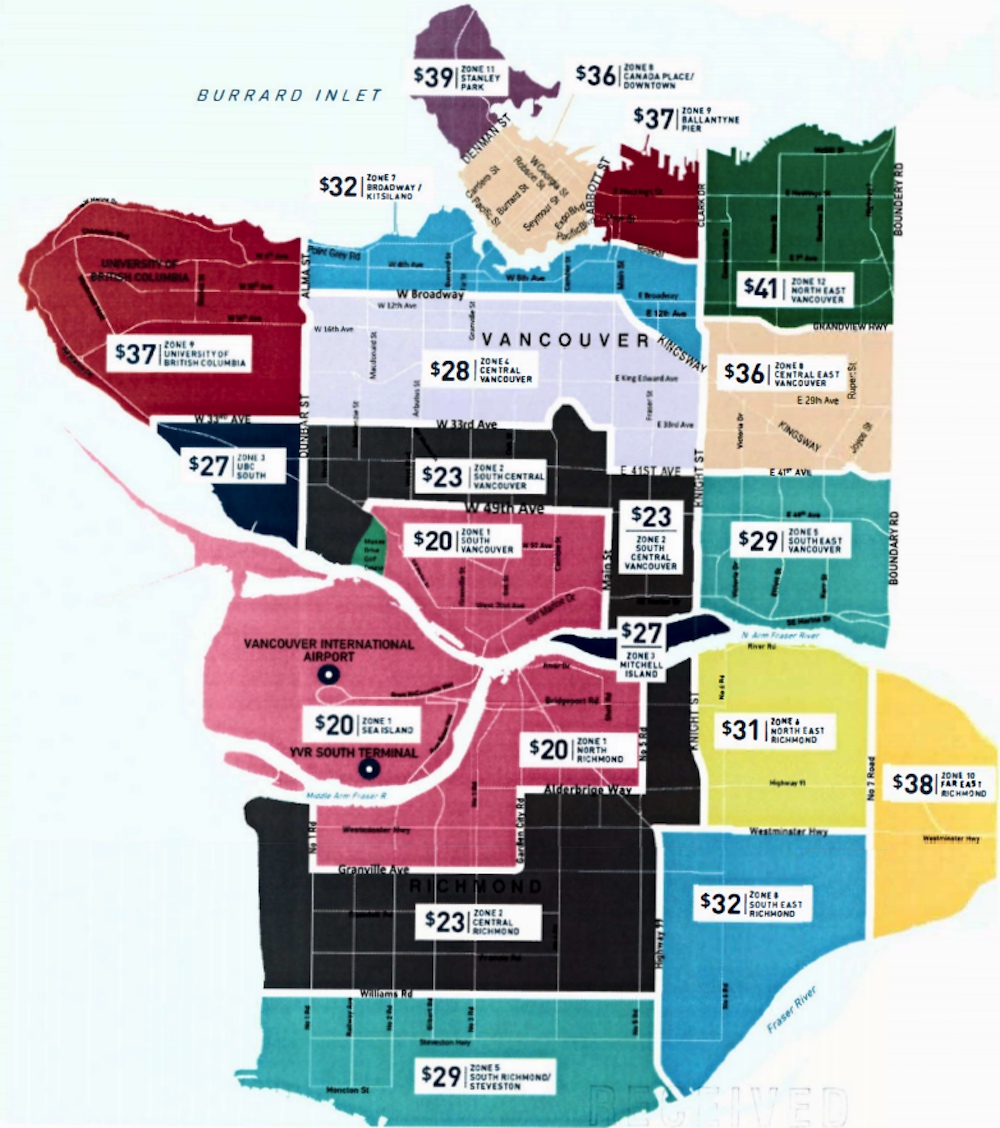 There are also proposed changes to Zone 1 South Vancouver, which is Zone 1 — a rate of $21.00 — currently framed by West 33rd Avenue to the north, Main Street to the east, the Fraser River to the south, and Dunbar Street to the west.

Changes are also proposed for Richmond, with the submission calling for clear map boundaries between Zone 1 North Richmond and Zone 2 Central Richmond. North Richmond is now defined on the map as the area north of Granville Avenue and Alderbridge Way, and east of No. 5 Road, but it would retain its existing rate of $20.00.

Zone 2 Central Richmond, framed by the Strait of Georgia to the west, Granville Avenue and Alderbridge Way to the north, Highway 99 to the east, and Williams Road to the south would see a $2.00 rate increase to $23.00.

The boundaries for Zone 3 South Richmond/Steveston are unchanged, but the proposal increases its rate by $3.00 to $29.00.

If there are two passengers going to different addresses in a zone, the zone rate will apply until the first passenger disembarks, after which the meter rate will be used.

For all other areas of Metro Vancouver, metered rates will apply for all other trips originating from YVR.

The PTB is expected to begin its review process on the YVR flat rate changes over the coming days.

These changes come at a time when transportation demand at the airport is severely depressed, with demand not expected to see a significant rise until late this year at the very earliest.

Taxi and ride-hailing companies across the region have been significantly impacted by the pandemic’s impact on overall transportation demand. 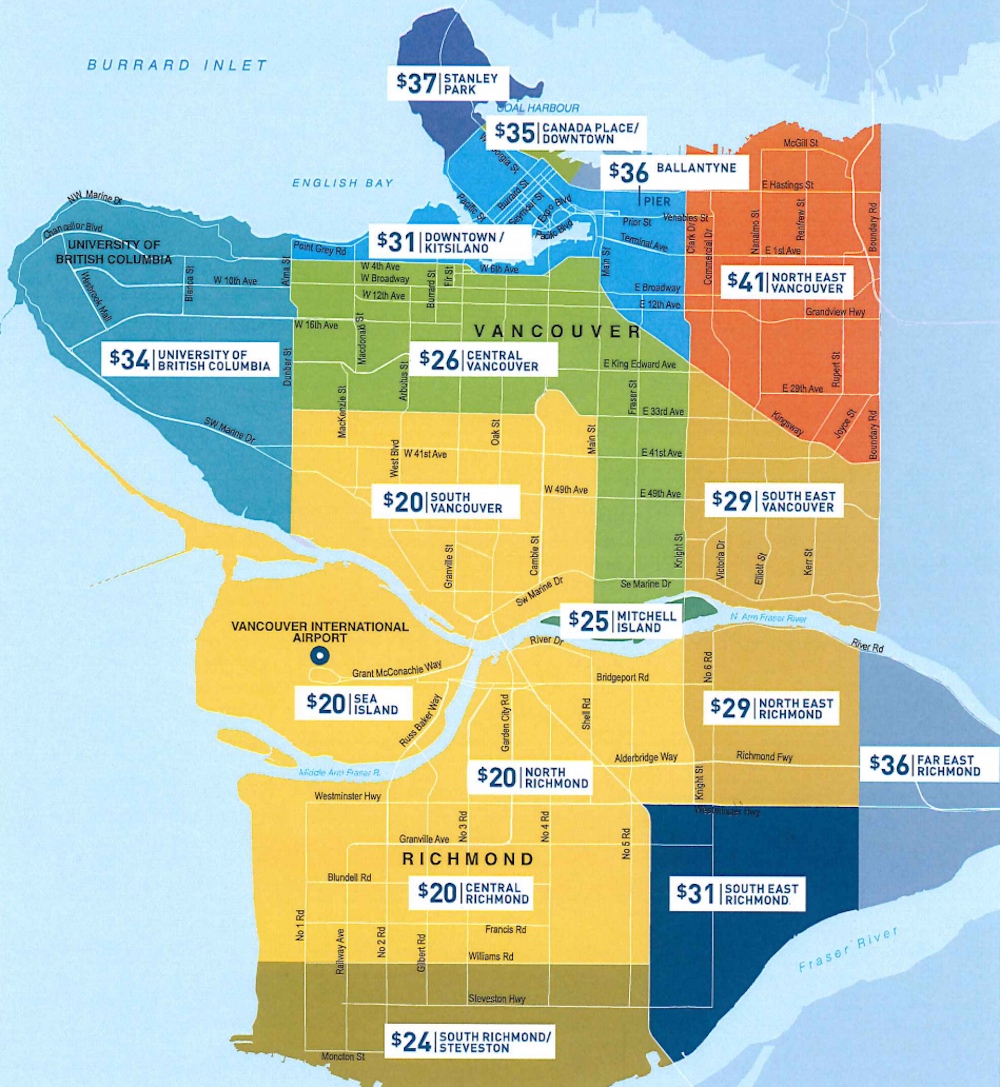