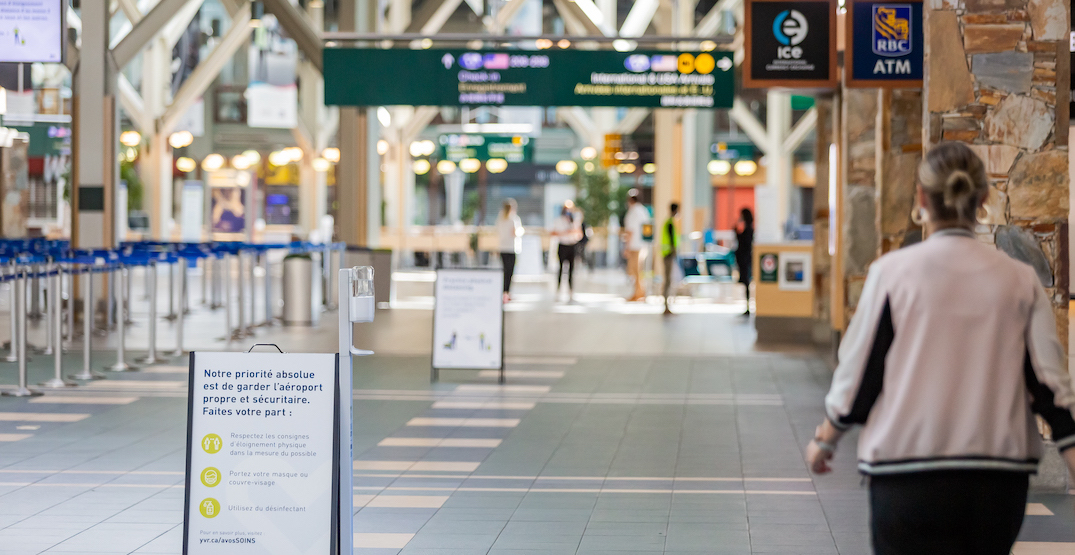 While there have been a number of reported cases of COVID-19 amongst passengers and workers at Vancouver International Airport (YVR), there has not been a reported case of transmission originating at airport or on an aircraft.

In an interview with Daily Hive Urbanized last week, YVR’s new CEO Tamara Vrooman described the process of flying through the airport as “a very safe, secure, healthy, and orderly process.”

Vrooman says some of the health safety measures are likely to stay even after health crisis passes, in the same way anti-terrorism security protocols were developed after 9/11. For now, as traffic is depressed, there has been no impact to processing times as a result of the new biosecurity measures.

“We are still in the period of adjusting, and determining which one of these multi-layered protocols will be the one that endures. We are still testing and learning, but certainly it is my view that we will have health protocols as a permanent protocol even post-COVID,” she said.

Air passenger volumes through YVR have plummeted over the past five months, but there has been growth since the pandemic’s low in April.

Passenger volumes have also increased considerably since June 2020, but based on the latest available full statistics there were a total of nearly 190,000 boardings for the month — up from 68,700 in April and 85,500 in May, but down from 2.4 million in June 2019. There was a doubling of passengers in each of the domestic, US transborder, and Asia Pacific markets compared to May 2020.

Here is the full breakdown of YVR’s passenger traffic for June 2020:

The increase in passenger volumes is also reflected by an uptick in aircraft arrivals and departures, with 7,046 runway movements recorded over the month — up from 6,188 in May and 5,568 in April, but down from 25,361 in the same month last year.

Vrooman says there are currently two general types of air travellers. On international flights, passengers are largely performing outbound trips, with many of the passengers being international students returning home after post-secondary institutions announced they will be conducting online classes for the upcoming term.

For example, she says, China Southern has been flying the large Airbus A380 to YVR about once a week. The outbound flight to Guangzhou reaches near capacity with about 600 passengers, but there are only approximately 60 passengers flying into Vancouver on the same route.

Other international travellers are mainly Canadian repatriation and essential trips.

For domestic flights, passengers are largely visiting or returning to friends and family in another part of the country.

The load factor on each flight is typically anywhere between about 75% to 30%.

Another major generator for traffic is air cargo, which is seeing a stronger recovery. In June 2020, 18,331 tonnes passed through YVR — down by 29.1% compared to June 2019, but a considerable improvement from the 50% year-over-year drop in April 2020.

Despite seeing its revenues fall by 90%, given that airline and passenger fees account for a considerable portion of YVR’s revenue sources, Vrooman says the airport is in a strong financial position, and plans on going to the market to restructure their financing and extend their debt over a longer period, just like other businesses.

“Once we do that, we will be in a position to carry on financially even with low traffic volumes for the foreseeable future,” she said.

To reduce operating costs and adjust for actual demand, about a quarter of YVR’s staff of more than 500 people were laid off in May, and sections of the large terminal building are closed as usable gates have been consolidated.

But Piers A and B within the domestic terminal recently reopened to meet the capacity needs of WestJet’s recent decision to increase their domestic flights. However, the check-in area for domestic flights remain largely consolidated within the international terminal.

Construction projects that were suspended early in the pandemic are now resuming, including the nearly-completed Pier D international terminal expansion, which was originally set to open at the end of June. It is now scheduled for a completion in December, but it is unclear when exactly the added capacity and space — complete with new dining and amenities — will be used.

Prior to the pandemic, the terminal building had exceeded its capacity of 25 million passengers annually. In May, YVR estimated it would take several years to return to pre-COVID traffic volumes, with the forecast of eight to 15 million annual passengers for next three years.

Vrooman says the tourism and leisure segment of air travel will eventually return when borders reopen, but there are questions in the aviation industry over whether business travel will return to the level it once was.

“A recovery will depend on so many factors. Certainly there are those who think a recovery will be swift, and we are seeing a pent up demand for travel. And then there’s those who think the business segment of travel has been potentially affected for the long term because of the ability to use technology to connect virtually, as supposed to face to face,” she said.

“While the technology is great and it allows us to work through this period in the middle of a pandemic, I think there is no substitute for a face to face meeting for key events both in business and in life. I personally there will always be a demand for business travel, although its composition and frequency may be changed.”