First there was Captain James Cook, then there were four Vancouver men who dreamed of crossing the Strait of Georgia in a hot tub.

Oh how exploring has evolved.

It’s not a phony engineering proposal or an impossible bucketlist goal, four men will venture across the lengthy Strait of Georgia in a “hot tub boat,” a contraption made of two 18-foot pontoon, a 9.9 horse power outboard engine, a disco ball, and of course, an eight-person hot tub.

The project was funded through a Kickstarter campaign that successfully raised just over $3,000 and allowed the men to improve their already existing hot tub boat for a trip across the vast, choppy waters.

The first incarnation of the hot tub boat, better known as HTB, was a cozy voyage in English Bay during the 2014 Celebration of Light fireworks, but Edward Estabrook, one of the boat’s captains and designers, told Vancity Buzz at the time that he had bigger dreams.

“We plan to make a voyage across the Strait of Georgia… because we can.” 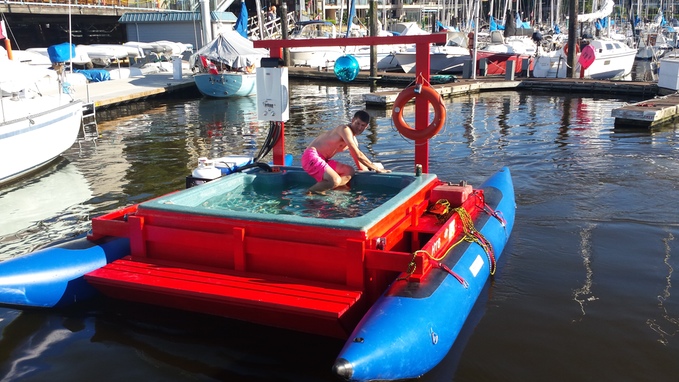 The original HTB ready for the fireworks in 2014. 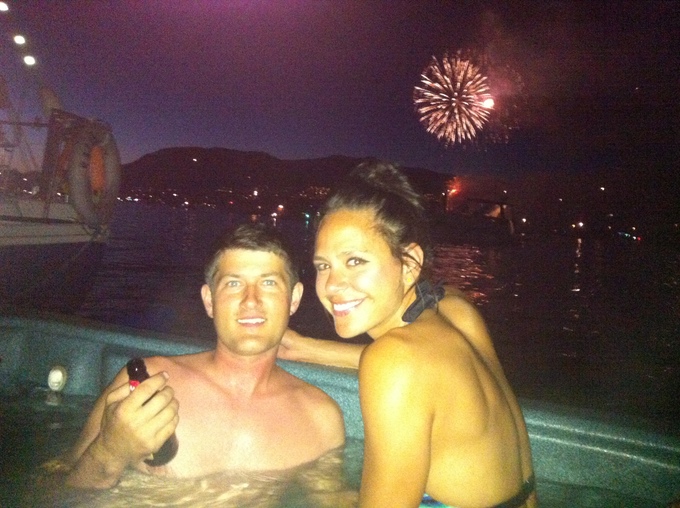 Testing the contraption hasn’t been without errors. In the group’s Kickstarter campaign, they recount one trial that left their tiny engine at the bottom of the ocean.

“During advanced sea trials in 15 knot breeze and associated chop the trusty 9.9hp outboard at full throttle leapt from HTB, taking the transom mount with it.  After 36 hours on the ocean bed our resourceful friends Brad and Pat donned scuba gear and recovered the package using a transit taken at the time of disappearance.”

But numerous tests and trials have proven the 1000-pound, fire-safety-red HTB to be a viable transport device, able to hold up to 12 people at a time

Even though the HTB team consisted of two PhD’s in physics and chemical physics and three Masters degrees, there were no engineers on board. That didn’t stop them from constructing a boat that could withstand the perils of the open sea. 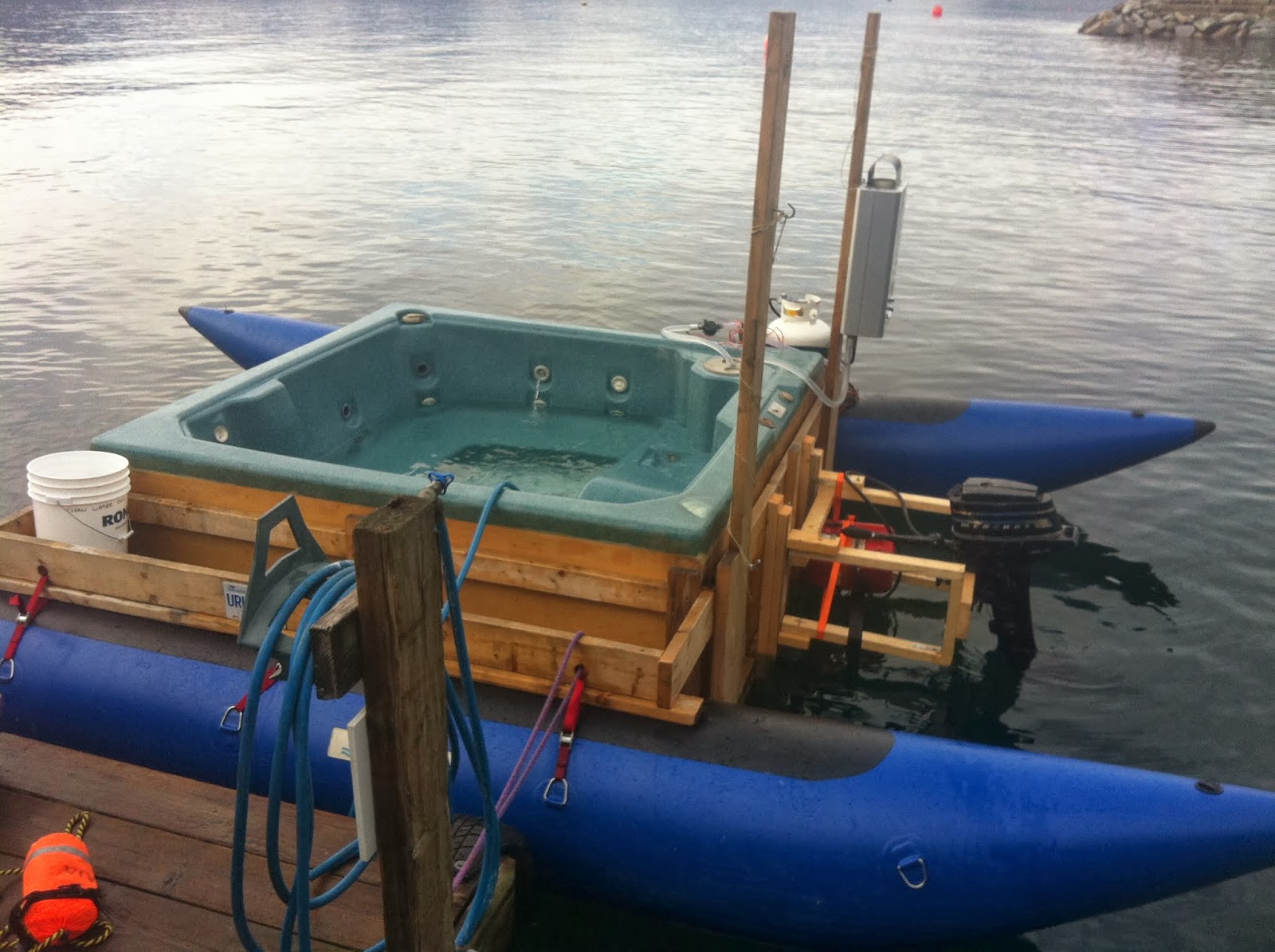 “We used a encased wood frame, surrounded by 3/4″ cedar and 1/2 fir plywood, covered by 2 layers of fiberglass mat and 5 gallons of Epoxy resin – significantly more solid than your average 30-foot boat. One of the longest phases of development was leak-testing, both ensuring in-tub water did not escape and that ocean water did not enter,” says Estabrook, who is an avid sailor with plenty of experience fixing his own fibre-glass sailboat.

As for keeping the water hot, an integral feature of the HTB, they use a 68,000 BTU propone-powered heater and a 12-volt battery to provide power to a fresh-water pump that circulates water through the heater. The high-thrust outboard motor then provides 10 amps to refresh the battery’s charge.

And of course, the battery also provides power for some flashy LED lights and a pimped-out sound system.

For safety, they have ensured their boat is up to the construction standards of Transport Canada, including safety gear, food, fire extinguishers, a life ring, GPS and VHF and extra dry clothing. Estabrook says they have taken “great care to exceed [safety standards]”, but if something should go wrong they will have escort boats on hand.

For Estabrook and his team, it’s a just a matter of finding the right day with the right weather conditions to fire up the engine. The 25 nautical mile trip from False Creek to Silva Bay is expected to take from seven to 10 hours, so it is likely they will have to wait until spring when longer daylight hours return. 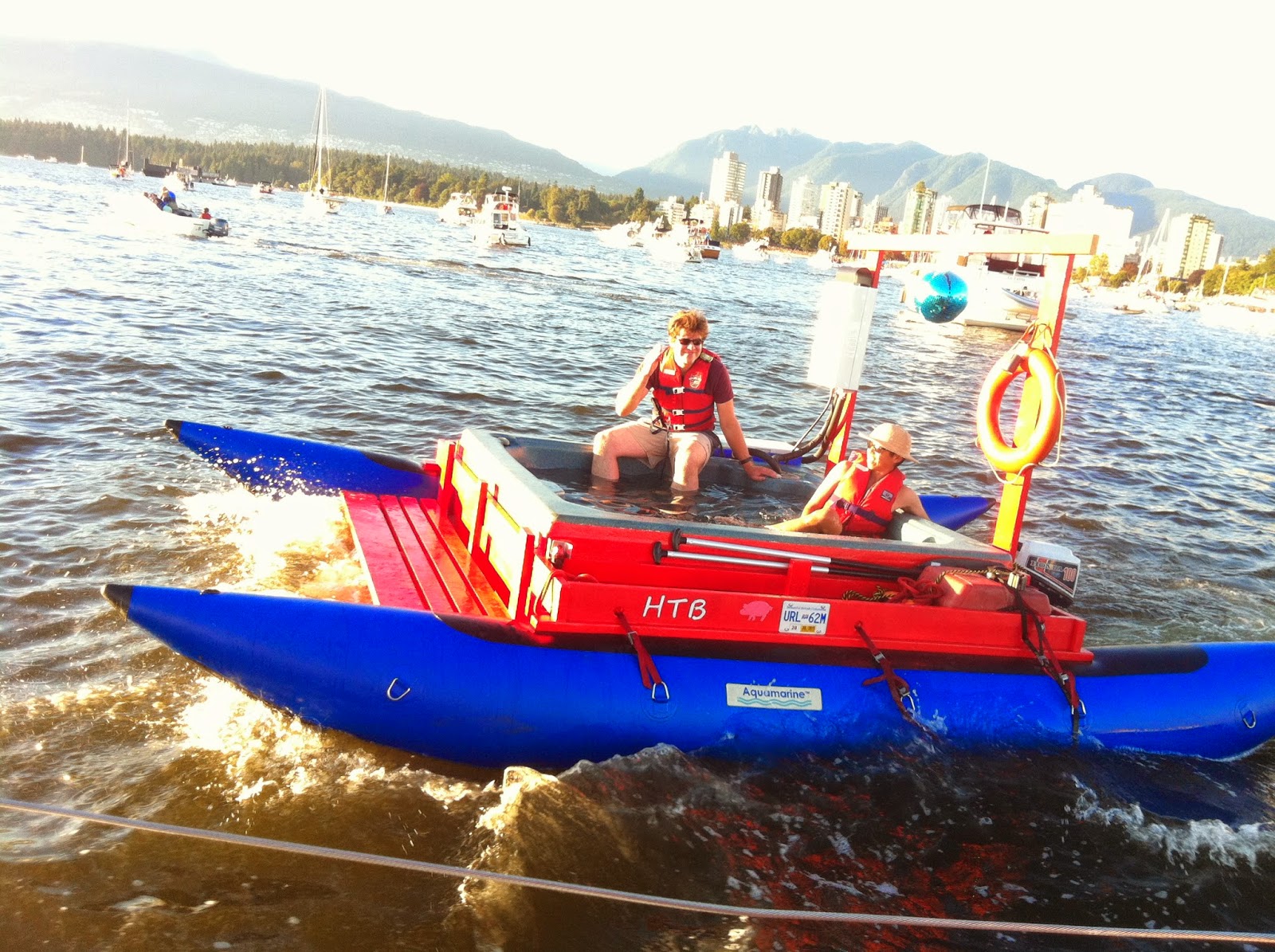