Aren’t they a little short for Stormtroopers? Not if they’re Giants.

Vancouver’s Western Hockey League, the Vancouver Giants, unveiled their jerseys for the upcoming Star Wars Night. Facing off against the Kootenay Ice December 4, they’ll take to the rink in Lucasfilm-approved jerseys modelled after Imperial Stormtroopers, the infamous soldiers from the Star Wars franchise. 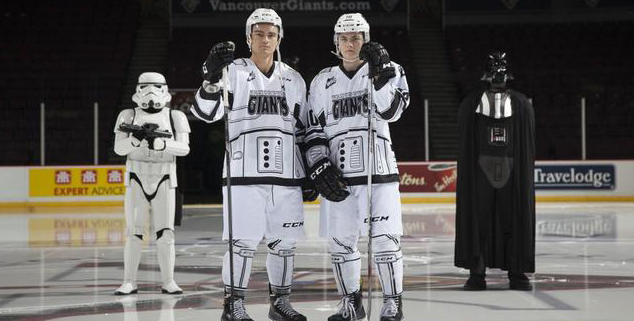 The special theme game is in support of the Shriners of BC and Yukon, and the Shriners Hospitals for Children.

“We’re thrilled that we will be able to host this great event for our fans while also benefitting a very worthy cause,” Giants Vice President, Business Development Dale Saip, said in a media release. “The Shriners Hospitals help children around the world, and it’s an honour for our hockey club to be able to work with the Shriners to help kids in our province.”

Other than just the themed jerseys, characters from the Star Wars universe such as Darth Vader and his full-decked out Stormtroopers are rumoured to be making an appearance.