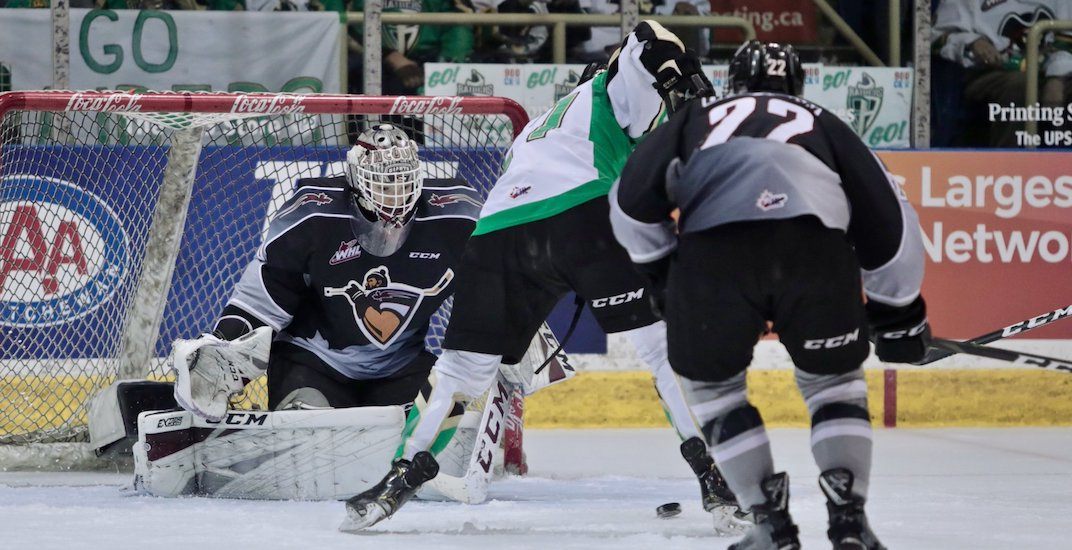 The Vancouver Giants made this season one to remember.

It wasn’t the end result they wanted, but the Giants put on a show during the regular season and playoffs, making it all the way to Game 7 overtime of the WHL Finals.

After going down 3-1 in the series to the Prince Albert Raiders, the Giants never gave up. They battled to win Game 5 at the Langley Events Centre by a 4-3 score before winning Game 6 in Prince Albert, and taking Game 7 to overtime on Monday against the best team in the league.

It was a thrilling game from start to finish, but it was Dante Hannoun scoring the overtime winner for the Raiders.

The celebration is on at the Art Hauser Centre! @hannoun19 wins the 2019 @Rogers #WHLChampionship Series for @PARaidersHockey in overtime! pic.twitter.com/JXqTrzMLZm

Things started off well for the visitors. With the game scoreless in the second period, it was Giants’ star defenceman Bowen Byram dazzling once again to help open the scoring. He skated down the left boards and fed a perfect pass across to Milos Roman, who made no mistake to give the Giants a 1-0 lead.

Milos Roman! The @NHLFlames prospect opens the scoring for @WHLGiants in Game 7 of the 2019 @Rogers #WHLChampionship Series! pic.twitter.com/fBrgpcFkjx

It was Roman’s third goal of the postseason and first in the finals, while Byram picked up his league-leading 26th point of the playoffs with the assist.

The Raiders wouldn’t be held off the board for much longer, with Noah Gregor evening things up just 10 minutes after the Roman tally.

Noah Gregor evens this game up with a beauty! The @SanJoseSharks prospect gets the @PARaidersHockey on the board! #WHLChampionship pic.twitter.com/59VoAcuym2

The Raiders pushed hard to end the game in regulation, especially in the final two minutes but goaltender David Tendeck and the Giants held the fort to get the deciding game to overtime.

The Giants had their chances to win it in the extra period, including a late power play when Brett Leason took a delay-of-game penalty but Vancouver couldn’t get one past goalie Ian Scott, who made 22 saves in the game.

Tendeck was stellar throughout for the Giants, stopping 36 shots and keeping his team alive during several stretches when the Raiders poured on the pressure.

A showcase of respect. Series after series. Year after year. #WHLChampionship pic.twitter.com/EpxoSm9201

This was the Giants’ first season under head coach Mike Dyck. He implemented a great defensive structure to the team, resulting in 95 fewer goals against this season compared to last year’s squad.

The Giants finished the regular season with a 48-15-5 record, the best in the Western Conference, and carried that success into the playoffs.

After beating the Seattle Thunderbirds in six games in the opening round, the Giants swept the Victoria Royals and took down the Spokane Chiefs in five games to punch their ticket to the WHL Finals, where they went toe-to-toe with the Raiders until the bitter end.

Though there were a number of key contributors for the Giants, there was no player more important than Byram. The top defenceman eligible for the 2019 NHL Draft finished the playoffs with a league-leading 26 points in 22 games, making him the first defenceman to ever lead the WHL playoffs in scoring.

While the Raiders are the ones advancing to the Memorial Cup, the Giants can be proud of the effort they put forth all season long.

They weren’t rewarded with a trophy, but this season helped bring a much-needed passion and buzz back to this region’s WHL fanbase that had been struggling the past few seasons at the Pacific Coliseum.

One of the most spirited, exciting, memorable seasons in the history of the Vancouver Giants…

Safe to say, the LEC will be rocking for years to come.