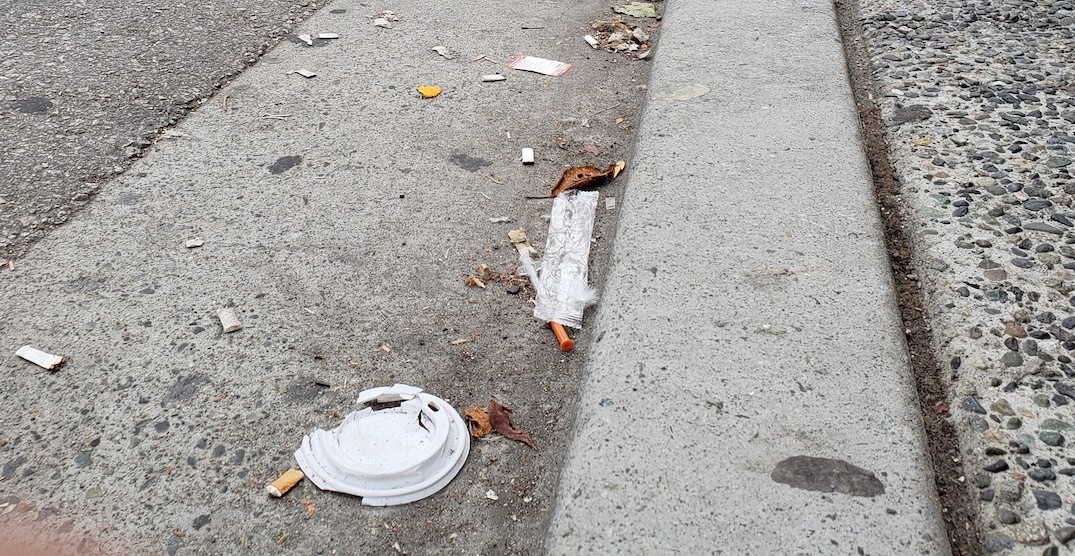 Needles and other garbage on the curb at the intersection of Dunsmuir Street and Seymour Street. (Kenneth Chan / Daily Hive)

While the City of Vancouver has had a decade-long mandate of becoming the “greenest city in the world,” one city councillor is raising concerns that the city is overlooking a major day-to-day aspect of street cleanliness and proper maintenance and wants urgent attention on the matter.

In a motion to be debated by council this week, councillor Sarah Kirby-Yung attests that the municipal government has not kept up with its social contract of delivering proper street and sidewalk cleaning and maintenance that allow for everyone’s safe enjoyment.

“In recent years, the people who live and work in Vancouver, as well as visitors to our city, have noted and openly commented on a significant decline in the physical state and cleanliness of our city, offering up and reporting on numerous examples such as streets with potholes, overgrown street medians, and neglected sidewalks that represent a variety of safety hazards, and the increased amount of litter on sidewalks, overflowing garbage cans, and discarded food items that attract insects and other pests,” wrote Kirby-Yung, describing the deteriorating state of Vancouver’s public realm.

The problems have become so severe that it has diminished “basic civic pride and confidence in the day-to-day management of the city.”

“Residents and businesses in Vancouver are genuinely dismayed that while the taxes and fees levied by the City of Vancouver constantly go up, services appear to continually diminish, and that the city appears dirty and neglected from the perspective of basic maintenance and commonly accepted standards of cleanliness,” she stated.

“Abandoned garbage can also cause health and environmental risks, sends a message that illegal activity is tolerated in our neighbourhoods and costs taxpayers over a million dollars a year,” reads the city’s website.

To address the issue, Kirby-Yung is calling on city staff to prioritize the cleanliness and maintenance of roads, street medians, and sidewalks as a core aspect of the 2020 budget.

The effective increase in service levels should result in a visible improvement to the state of good repair, safety, and cleanliness, including the performance of sidewalk repairs and the timely removal of street litter and emptying of public litter receptacles.

If necessary, the budget to achieve this “back to basics” mandate can be found from the reallocation of funds from the municipal government’s other budget items of “lesser public impact and effectiveness.”

She is also requesting that both council and city staff acknowledge and renew the mandate of proper cleanliness and maintenance of city streets and the wider public realm as “core jurisdictional responsibilities of the City of Vancouver.”

Additionally, she wrote, city staff should collaborate with the Vancouver Park Board to identify any impediments they face in fulfilling their contracted maintenance of the city’s street medians.