Entrepreneurship is happening in Vancouver at speeds that never fail to baffle me – especially when former Canucks are getting in on the action.

This week has been especially explosive for startup fever spreading in Vancouver as I’ve met a plethora of amazing women entrepreneurs, 16-year-old entrepreneurs and finally yes, it’s true, a former Vancouver Canuck.

Also a former Stanley Cup winner (unfortunately not with our Canucks), Bret Hedican joins me to talk about his involvement in Rosterbot, a startup founded by Ian Bell and inspired by the beautiful game of hockey itself.

RosterBot is a service focused on Team Management. We offer a web-based service that presents simple, powerful tools that take all of the complexity out of managing a team for anything.

We currently service everything from hockey teams (thousands of them) and other action sports to bridge clubs, church groups, and even a few US Marines (doing what, we have no idea). This was originally created as an experiment by my partner Ian, who is a hockey goalie and who plays way too often. He thought he’d create a quick little web tool to make life easier for his own teams.  That was in 2007… and here we are.

2. Please talk about your traction, how many users do you have and how fast are you acquiring them? What sports/activities are most being used and what countries/cities are you seeing the most adoption/growth in?

RosterBot has many thousands of active teams and has, to date, grown purely organically from a handful of teams when Ian first rolled out the platform in 2008.  Now that we’re a whole company with staff and budgets we’re starting the push to grow in other markets and sports.

Presently, though RosterBot has teams in 60+ countries, over 1,000 different cities and towns, and they’re using it for more than 350 different kinds of sports and activities. To say that the range of ways in which people have found RosterBot useful has exceeded our imagination is an understatement.

3. How has Vancouver’s rising startup community played a role in the development of Rosterbot?

My co-founder Ian comes from that community and I think has had some impact on its growth, but now we’re reaping the dividends of that maturing scene as we are able to build a team with a lot greater experience than you would have, even say 5 years ago.

Also, when you have a community like Vancouver has it’s easier to get the word out about your company and grow your impact. They act as an amplifier in much the same way as the scene does down here in Silicon Valley.

We take the work out of play. It’s baked into our DNA to solve problems for athletes and make it easier to pull together teams and go have fun playing sports. In this way we have had and will continue to have a positive impact on peoples’ health and happiness… which is our mission.

At the end of the day, if we haven’t reduced the hassle and increased the fun level of managing a team, we’re a failure. 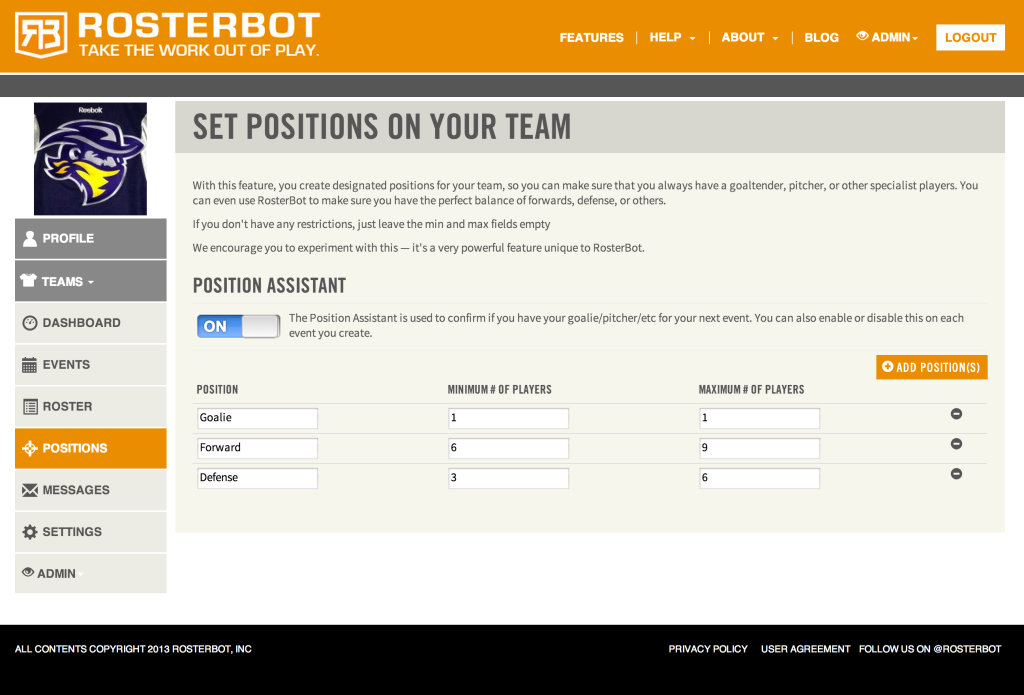 I’ve always had the entrepreneurial spirit and a passion for technology. With the skills I’ve learned regarding what makes a team successful, I’ve tried to leverage those skills today for the businesses I help create by using the attributes of successful teams and applying them to business.

All great teams have the same qualities or a PAT –

P – Plan, organized plan
A – Accountability, to the plan
T – Trust, & belief in all teammates!

James Higa! Because I’m new at being an entrepreneur, I look for people who have lot’s of “games played” experience, and lean on them for support and guidance. I always tried to lend a helping hand to young hockey players when I was a veteran to help guide them through the ups and downs of professional hockey, and now I look to veteran’s like James Higa to lend me his “games played” experience to help me through the technology landscape he knows well.

We’re obviously interested in working more with the Canucks and other local major league sports teams, and I happen to know a guy who suddenly has a lot of influence at Rogers Arena these days 🙂

Don’t try too hard & force things.  Take a deep breath, stay in the moment, believe in who you are, and everything will take care of itself! 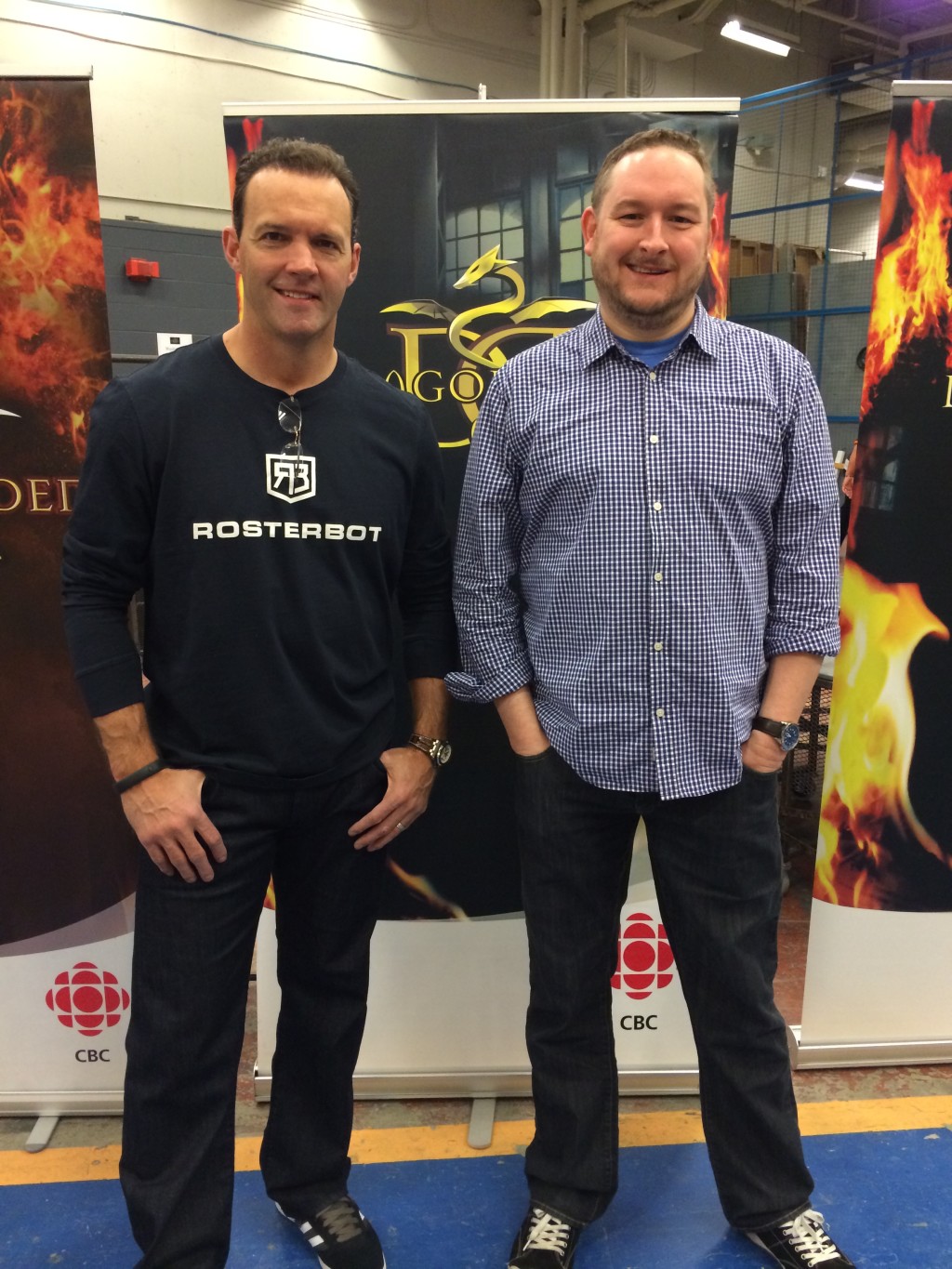 Communication is really essential for teams in any realm, whether it’s technology or sports. I’m really inspired by the tools we use as a company to stay connected to the task at hand… things like DropBox, Slack, Pivotal Tracker, and Github are wired into how we do business. There are lessons and metaphors in each of these that are helping us make RosterBot better, too… only focused on team sports.

Like an athlete, you’ll have lot’s of days that you say, “I can’t do this” and other days, “this is amazing!” Understand that to be great at anything you do, know that the good and bad, should cancel each other out, and all that’s left is you standing there.

Now, the question is, who am I? What do I stand for? What’s my dream and do I believe in that dream enough where it’s part of my DNA? Stay focused on keeping it simple to accomplish that goal! Any time I’ve performed my best, I’ve kept it simple with my A, B, & C!  What are your A, B & C?

When you get the opportunity to talk with Bret and witness how we connects the dots between playing professional sports and startups, it makes a lot of sense. In fact, it’s surprising there aren’t more professional athletes leveraging their work ethic and brand to bring cool new things to this world.

However, it’s inevitable and could very much be the norm in the next five years! So wait a second, us entrepreneurs are going to have to be competing with professional athletes now? I would like to say that the glass is half full and that you’ll be working and collaborating with your favourite Canucks – am I getting any closer to convince you to join startup land? I’ll keep trying, see you next week.