There are many angered voters in Vancouver today after an alleged altercation forced a downtown Vancouver Elections Canada office to close one hour early.

“If you find it more convenient, you can vote at any Elections Canada office across Canada.. before the deadline of Tuesday, October 13 at 6 p.m.,” reads Elections Canada’s website. However, this was anything but convenient.

According to witnesses, a security guard at Election Canada’s 140 Hastings Street polling location came out to stop pushing amongst those in line – pushing which, we’re told, never happened.

“It’s unclear as to why just before 5 p.m. we were being told they weren’t letting anyone else vote,” Brianna Blaney, who had been waiting in line with her boyfriend for over 3.5 hours combined, told Vancity Buzz. When Blaney couldn’t get answers on whether mail packages were still available for pickup, she headed inside to ask an official, who said they weren’t and had no plans of communicating it with voters waiting in line. When questioned, “he walked away and told security to have me leave and lock the door.” 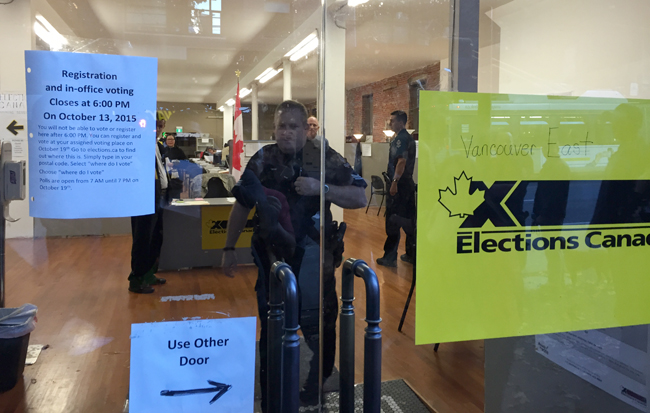 At this point a man and woman joined Blaney inside and refused to leave. “I left because I didn’t want to deal with that. And then they called the police,” Blaney continued, confused as to why the police were called since things were very peaceful. “People were talking calmly, there was no shouting, no yelling, and they called the police.”

According to the officer on scene, Vancouver Police were called because of a “disturbance at the door,” and nobody was hurt. “The polling station closed at 6 p.m. This is for people who aren’t going to be in the country. They processed as many people as they could.”

They later found out the security guard said he had been pushed by the man inside the building, which Blaney said was false. “In fact the opposite, he was touching all of us trying to herd us out of the building.” 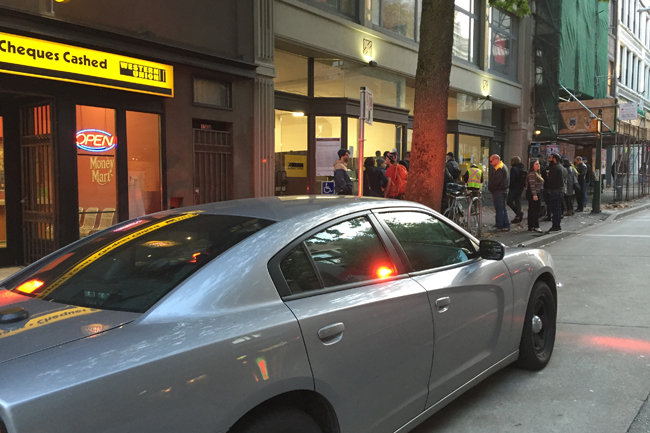 “Nobody would communicate anything,” she said. “Finally, the one gentleman came outside and announced they were not taking any more voters but they could take six more people and the reason they had to lock it down was because we were being disruptive in the building. So they just all had conflicting stories and an overall lack of communication.”

“Everyone in this lineup can attest to the fact that there was no pushing,” Megan Mullally, another voter who waited in line, told us. “There was absolutely no physical contact nor verbal aggression.”

“It was around 5 p.m. and this woman came out and said ‘we’re locking the doors, nobody else can vote,'” Mullally said. Signs on the door said voting was open until 6 p.m. but the Elections Canada official told those in line that a backup in paperwork forced the doors to close. “We had been waiting in line for over one and a half hours. We got here around 3:30 p.m. and we haven’t voted yet.” 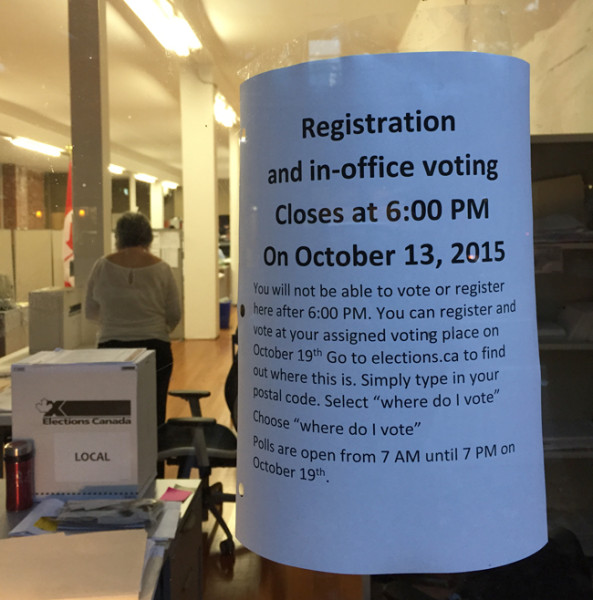 “It’s frustrating. It’s ridiculous… That’s fine, I can come back on October 19 and vote, I’m going to be here, but there were a bunch of people in line who were leaving the country,” Mullally said.

The lineup of people waiting to vote is in addition to the millions of Canadians who already voted in the first few days of advance polls, which definitely is not a bad thing.

“It’s an incredible sight to see this many people coming out to vote, and enthusiasm around voting,” Blaney said.

But while advanced polling stations and voting has been open since September, should Canadians know who to vote for that far in advance?

“You can’t be expected to vote two months early for an election when you don’t have any idea what anyone is standing for,” Blaney said. “That’s not a viable vote. So it’s frustrating.”

According to the officer on scene, Vancouver Police were called because of a “disturbance at the door,” and nobody was hurt. “The polling station closed at 6 p.m. This is for people who aren’t going to be in the country. They processed as many people as they could.”

Elections Canada was unavailable for comment at the time of publishing.