On August 30th, people gathered at the Ridge Theatre to participate in Vancouver’s first dessert festival hosted by Swallow Tail Canada It was a 1950’s theme, so dessert lovers went back in time while indulging in sweets and alcohol. Who could refuse sweet treats like this?!Some of Vancouver’s most talented culinary artists were present to stir up some tasty sweets. There were two time options to attend the festival, either from 7pm-9pm, or 9pm-11pm. Arriving at the latter time duration, I had time to digest my dinner and feast upon Vancouver’s top dessert producers.

Special guest, Shawn Soole, nominated as the World’s Best Bartender by Tales Of The Cocktail, had some boozy milkshakes and sodas for all to enjoy. 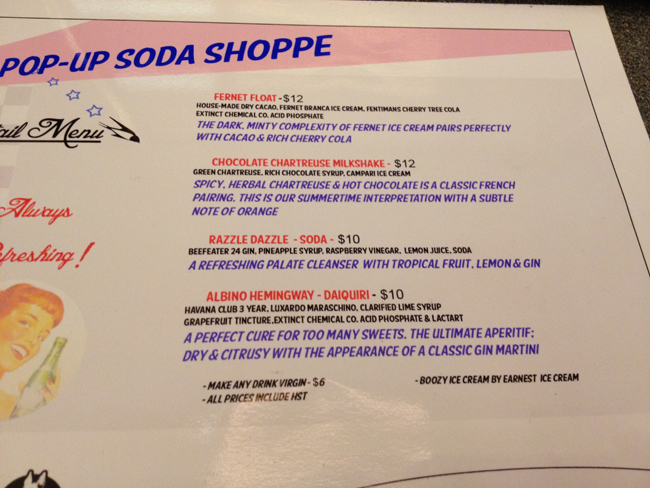 There were also salt watermelon and Sayuri sake shots. The sake was mixed with soda water and mint- it was refreshing and interesting. 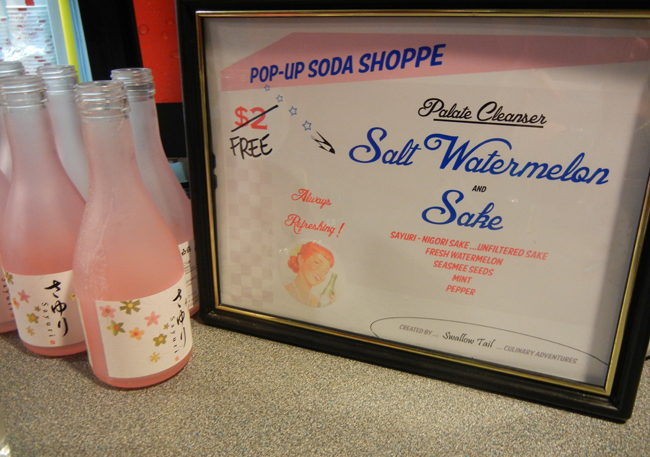 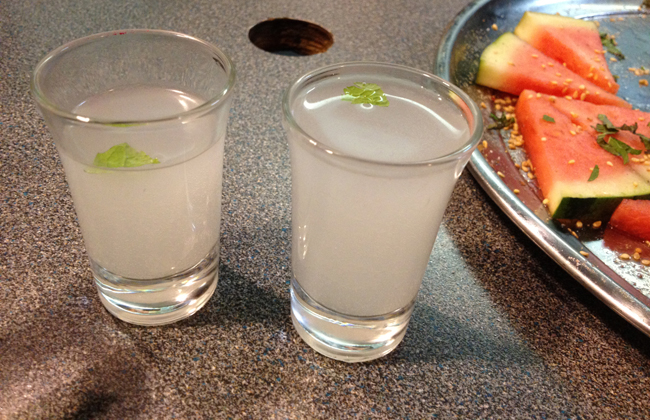 Cartems Donuterie were selling mini donuts with three very unique flavours. The donuts made by Cartems are all about quality and creativity. These donuts not only are hand made, but fresh ingredients are put into each donut and they are never frozen. My eyes feasted on the likes of the  Earl Grey donut, Maker’s Bourbon Bacon donut, and the  Maltese Falcon donut. These were so popular, I noticed they sold out before the festival was even over! 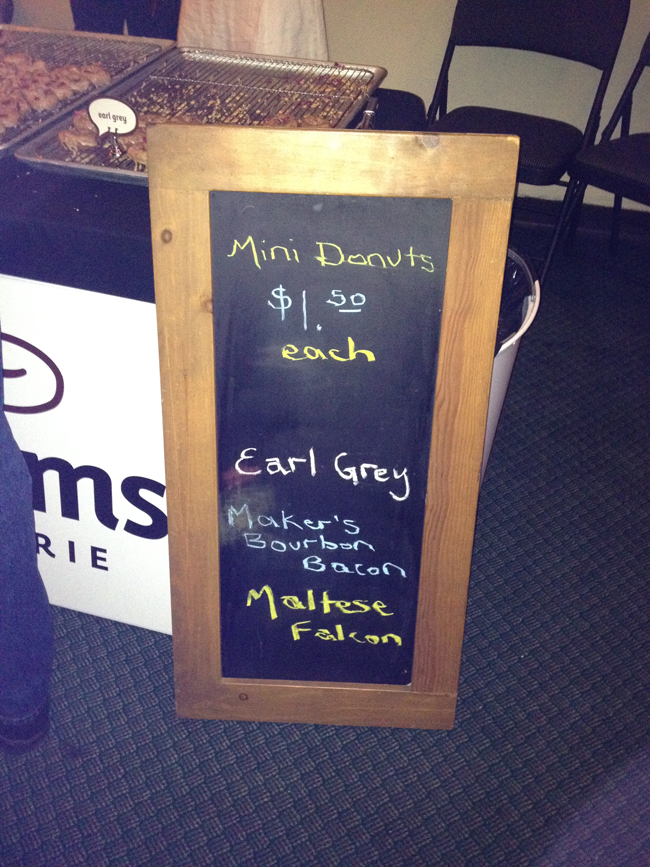 The Earl Grey donut was scrumptious. The pink garnishes are actually rose petals! I wish the donuts were served hot, though. 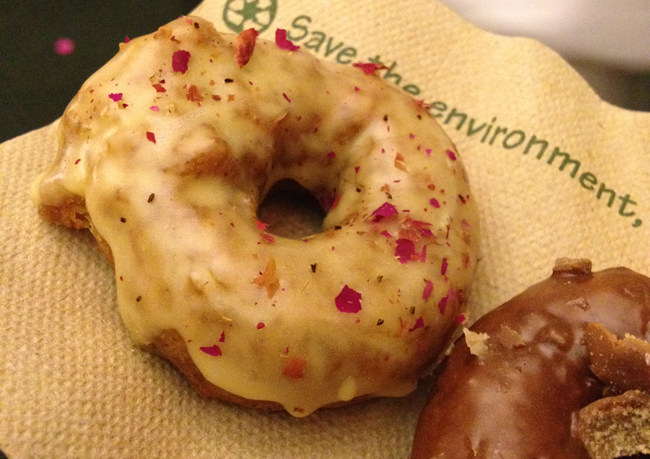 Next, I had the Maltese Falcon donut. There were crushed maltesers on top. There is never anything wrong with a chocolate donut, unless you don’t love chocolate. 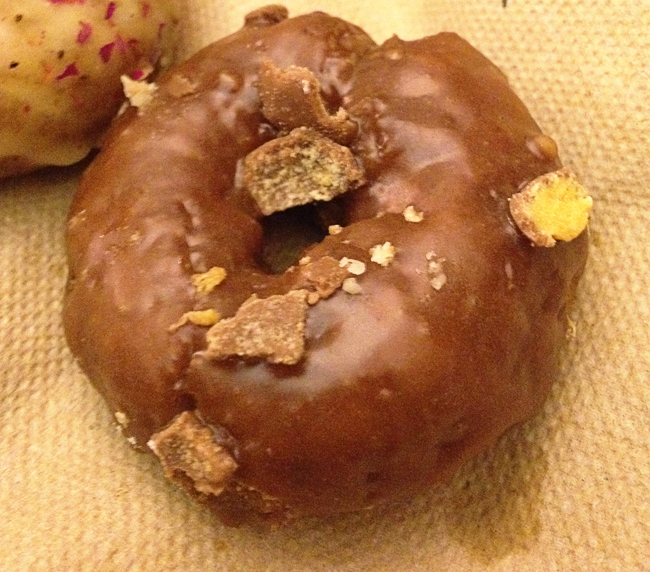 Earnest Ice Cream was serving appetizing $5 ice cream sundaes. Earnest Ice Cream makes seriously good ice cream. With local milk as its natural base and other whole food ingredients, you can taste quality in every scoop. 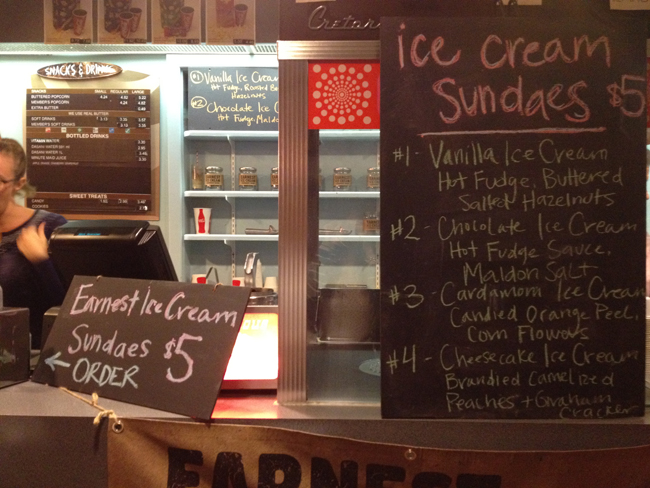 This is the vanilla ice cream with hot fudge and buttered salted hazelnuts. I await the day chocolate and hazelnut be married to each other, because they were a heavenly combination with the ice cream. 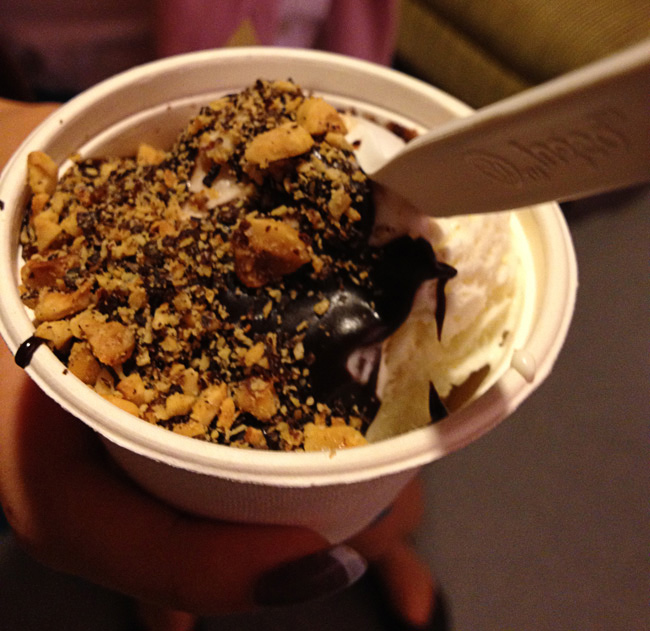 The rest of the dessert vendors were located inside the theater. People were busy taking pictures, eating chocolates and macarons while watching Grease on the big theatre.

Beta5 was one of the dessert vendors that served a variety of sweets and baked goods. There were banana cream pies, cream puffs, caramels, and their signature chocolates. Beta5 was established last year, and their focus is creating artisanal chocolates, desserts, and other delicious goods. Plus, they only use “premium, estate-grown chocolates sourced from France’s storied chocolate producer Michel Cluizel.” (source here.) 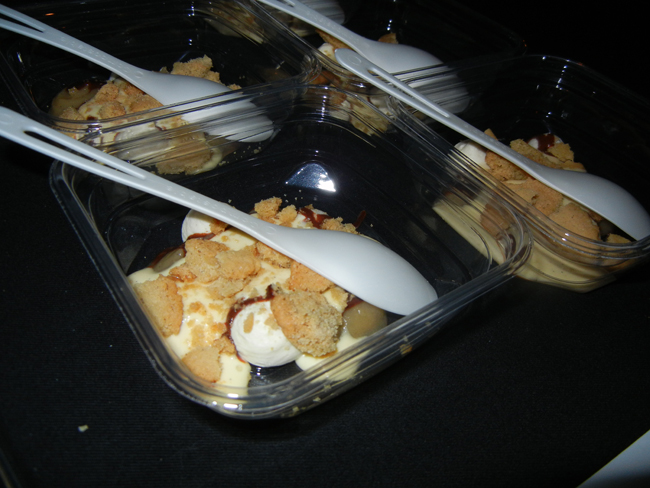 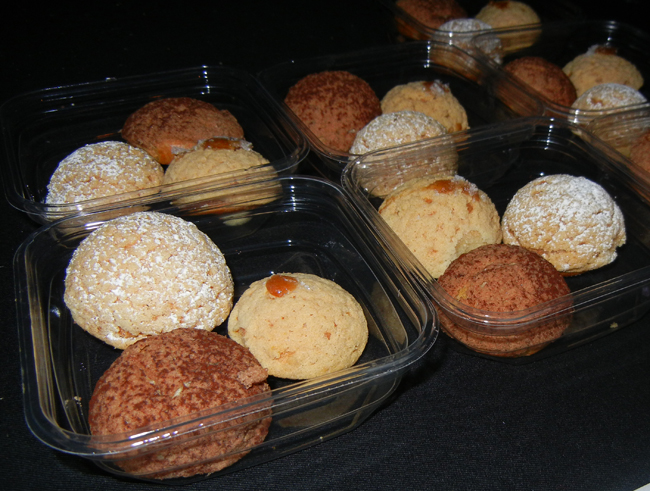 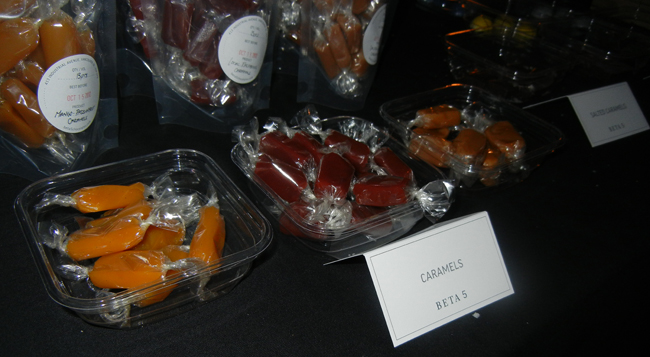 Beta5 was giving out free samples.  These quaint desserts were bites of delight. If clouds were edible, these treats come pretty close to being one. A fun scientific fact about Beta5 is that they use the “beta-5” crystal structure, which is also known as the most stable crystallized structure of cocoa butter. That’s what makes these chocolates distinctive. 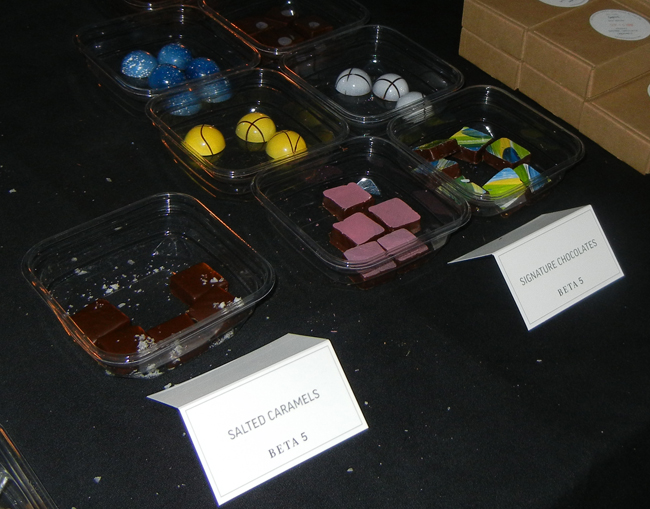 The last dessert vendor I visited, was  Che Baba Cantina. They are famous for their in house macarons and I was so excited to get some. Their boxes of macarons was definitely eye catching.  These macarons are created by Gourmands Macarons’ Paulin Calot. The French macarons were $1.50 a piece, $8 for six pieces, or $15 for twelve pieces. A special macaron was also made for the event; a myrtle macaron. 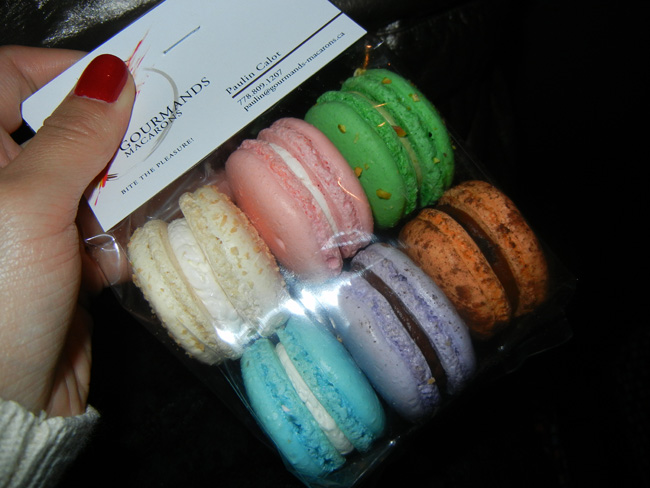 I took these macarons home to enjoy and gnaw. They were still chewy, despite being refrigerated. My personal favourites were the Earl Grey, myrtle, and coconut. Having never tasted myrtle in my life, the myrtle macaron was lightly sweetened, with an interesting aromatic taste. 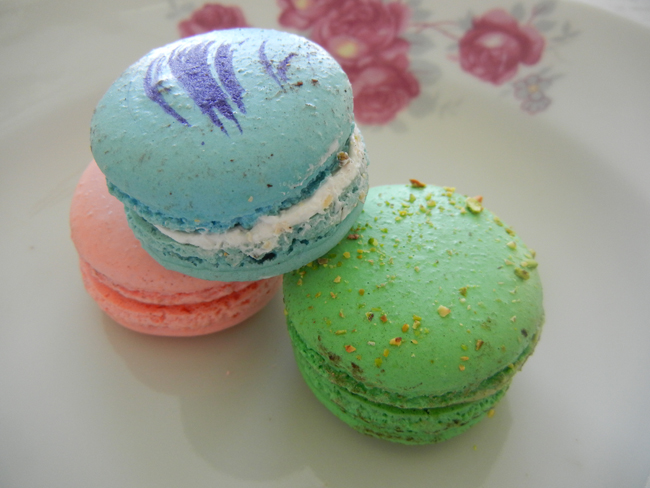 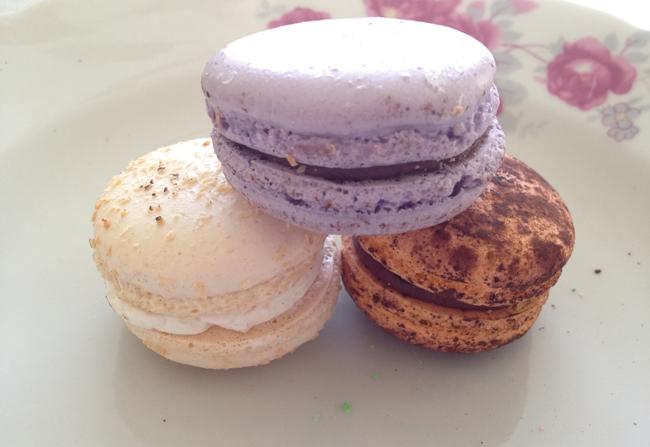 The chef certainly made sure the macarons were not plain looking. Garnishes on the macaron shells are always a plus. The coconut macaron had coconut shreds, the passion fruit macaron had chocolate powder, and the pistachio macaron had crumbled pistachio seeds. There were some gaps in the shell, but the size and taste of the macaron definitely made up for it!

Not only were there macarons, but also flourless chocolate tortes for $1 each. My eyes indulged on the plates of bite sized chocolates on little hazelnut cookies. 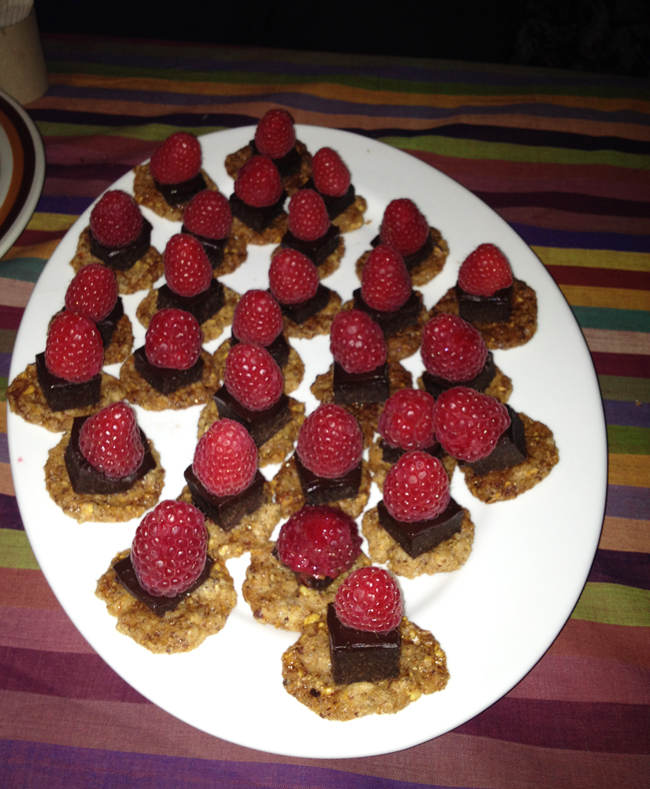 I had no idea what a “torte” was until I did some quick research. A torte is a type of multi-layered cake filled with lots of buttercream. Other than the macarons, this was my personal favourite. The chocolate was smooth and had a slight smoky aftertaste. I finished this in two bites and craved for more. 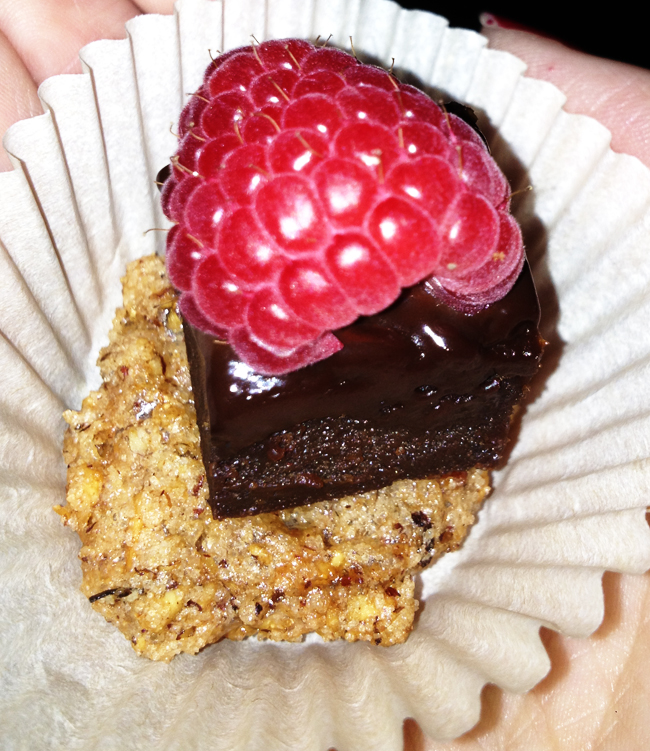 It was also great to see attendees dressing up for the event. There were poodle skirts, slicked back hair, suspenders, bow ties, and fedoras; it was a night of vintage fashion and unique desserts. Due to the Pop Up Soda Shoppe, new dessert places have been discovered and the night ended with a full, satisfied stomach.

Pictures and Article by: Whitney Hong, (@wheetnee) Blogger of WandsAndPliers