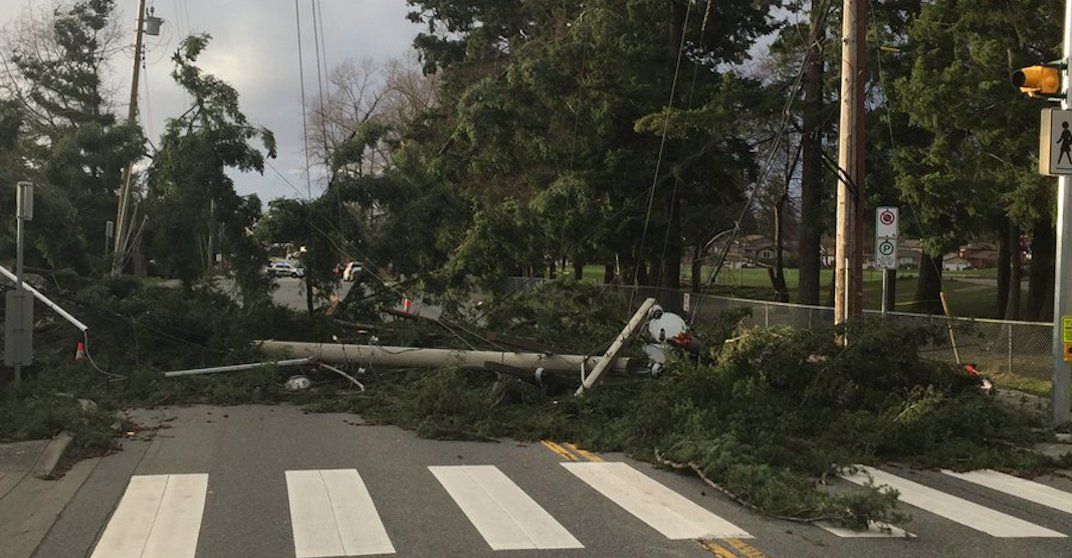 Following the powerful windstorm that slammed into BC’s south coast on Thursday, roiling seas and toppling trees, BC Hydro crews are still working to restore power to customers.

According to BC Hydro, Thursday’s windstorm was “one of the most devastating storms” BC Hydro has experienced in the past 20 years.

Due to the extent of the damage, some of the hardest hit areas will be without power for several more days.

Hundreds of downed trees have left some roads impassable, which means BC Hydro has not been able to complete a full damage assessment in some of the worse hit areas like Duncan, Nanaimo, Lake Cowichan, and the affected Gulf Islands, according to a release from BC Hyrdro.

Because of this, it will take crews several days to restore power to these areas, and other areas may be added as damage assessments are completed.

In some rural parts of Surrey and the Fraser Valley, it may take another 24 to 48 hours to restore power.

#BCStorm update this morning: Crews have restored power to over 600,000 customers since the storm hit on Thursday, including all customers in #LowerMainland and #FraserValley affected by the storm. About 23,000 customers remain out on #VancouverIsland and #GulfIslands. pic.twitter.com/h1cfvxFSAA

“I know any power outage is an inconvenience and can present challenges – and even more so at this time of year. On behalf of BC Hydro, I would like to thank our customers for their continued patience,” said Chris O’Riley, BC Hydro’s President and Chief Operating Officer.

“We are doing everything we can to get all of our customers back on and our crews will work around-the-clock until we have every last customer connected.”

According to BC Hydro, there are currently more than 800 field personnel working hard to repair 1,100 spans of wire, 300 power poles, 550 cross-arms and 170 transformers that were destroyed in the storm.