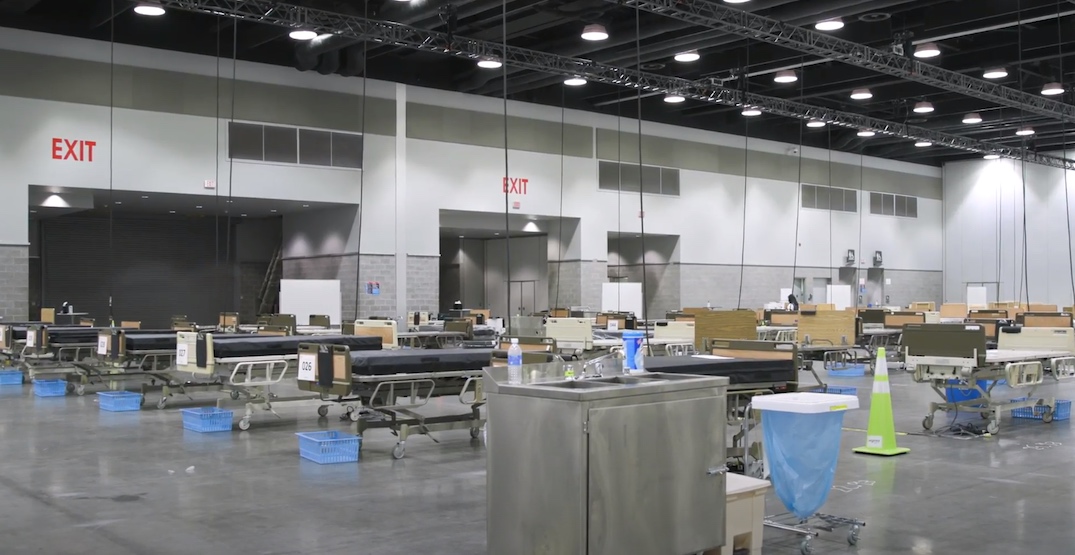 There are no plans to dismantle the temporary hospital inside Vancouver Convention Centre anytime soon as part of BC’s economic restart plan.

Nearly two months ago, it took over a week for Vancouver Coastal Health (VCH) to set-up the overflow medical facility within the West Building‘s vast underground exhibition halls, creating a 271-bed facility for non-coronavirus patient care.

At the time, there was uncertainty over the severity of BC’s hospitalization curve, so as a proactive measure under the direction of the provincial government, the unused convention centre was activated as supplemental hospital capacity — effectively opening up bed space in hospitals for potential coronavirus patients.

BC had also opened up bed space in hospitals by cancelling non-urgent elective and scheduled surgeries. As of last week, about 30,000 of these surgeries have been postponed or left on the waitlist, and another 24,000 patients could also be without referral. The provincial government previously stated it could take up to two years to catch up.

As of Monday, BC has just 37 patients in hospitals for COVID-19, the lowest number since March 21.

But until there is a vaccine or treatment for the coronavirus, the provincial government will remain on guard for any potential new waves of the pandemic. And this means the temporary hospital will likely remain a fixture of the convention centre for the foreseeable future.

“We have cautious optimism about the downward trend in COVID-19 infections, however we are still in the very early stages of our restart plans,” Carrie Stefanson, a spokesperson for VCH, told Daily Hive Urbanized in an email.

“As we move further into Phase 2 of BC’s restart plan and begin to resume elective surgeries, there remains a risk that the increase in contact among the general public could lead to another surge in infections, as Dr. Henry described in her latest modelling.”

She adds that the provincial government’s plan to restart surgeries requires maintaining patient bed and critical care capacity for both surgical patients and the possible surges of COVID-19 patients.

If there is a need, the facility at the convention centre — equivalent to the total bed capacity of North Vancouver’s Lions Gate Hospital — can be activated and staffed to accept patients within just 48 hours.

According to Jinny Wu, a spokesperson for Pavco, the provincial crown corporation that operates the convention centre, they have adopted a cost recovery-only model to support VCH’s temporary facility. They are only charging VCH between $2,000 and $6,000 per month to offset utilities costs.

As the facility only occupies the West Building’s exhibition halls, there is some potential for the convention centre to utilize its unused upper three levels of ballrooms and meeting rooms for some of its normal business. As well, all of the East Building, within the Canada Place pier, and outdoor spaces such as Jack Poole Plaza remain available.

“The Vancouver Convention Centre has a very extensive history hosting events of all shapes and sizes including banquets, TV and film shoots and smaller-scale meetings. We are actively looking at all opportunities to potentially host modified events that prioritize the safety of our staff and guests while meeting public health orders and guidelines – until a more appropriate time where larger meetings and events can resume,” said Wu.

“We’re currently in discussion with numerous organizations and authorities about these modified events.”