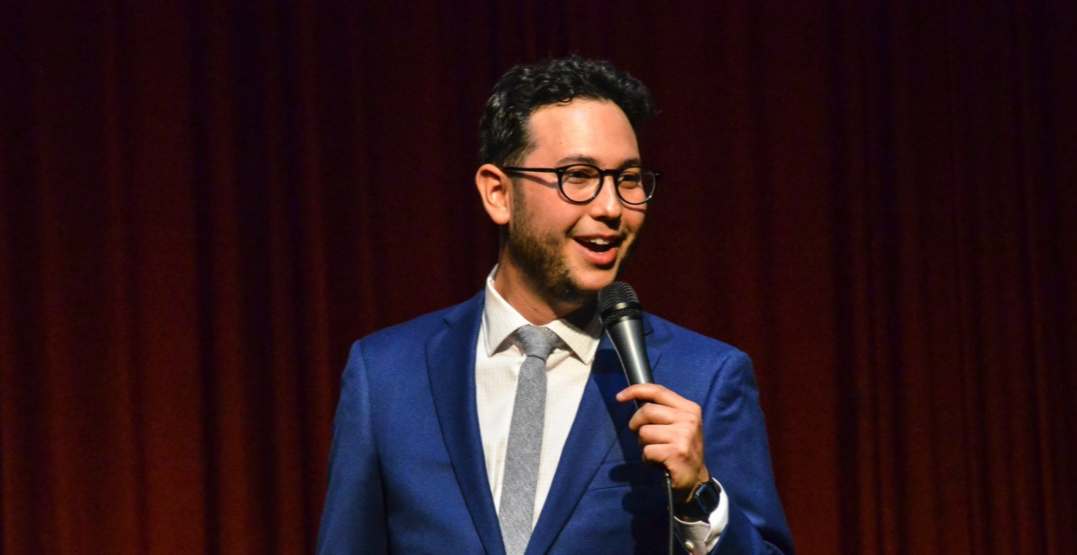 As hallmark events in Vancouver continue to be cancelled, the ecosystem of the city’s stand-up comedy scene, which otherwise provides year-round entertainment, is at risk of not returning once the COVID-19 pandemic is over.

“Vancouver was on its way — regardless of being an expensive place to live, a hard place to operate a bar — to becoming one of the main comedy centres in Canada,” says comedian Jacob Samuel, whose debut comedy album, Horsepower, is set for release on June 16.

Over the last decade, Vancouver lost almost 400,000 sq. ft. of studio space for artists, or a loss of about 50% of the buildings dedicated to such studios. Some of these spaces included smaller venues for comedy and improv shows.

I also dig into his hilarious past.

Prior to the crisis, Vancouver’s comedy scene was hit particularly hard with the closure of The Comedy Mix in April 2019 and the impending closure of Little Mountain Gallery, which hosted regular comedy and improv shows.

Nevertheless, according to Samuel, stand-up comedy in Vancouver “really thrived” despite high property taxes, restrictive liquor regulations, and a lack of resources from the municipal government for an entertainment sector “that adds value to the city.”

“Vancouver has produced a lot of really fantastic comedians and has an amazing history of improv. Colin Mochrie and Ryan Stiles were from TheatreSports. There’s been such a strong, independent improv scene. And then also, Brent Butt is based here. Ivan Decker, Graham Clark, Erica Sirgudson, there are so many great comics. Seth Rogan was doing stand-up here.”

Samuel points to the importance of small- and medium-sized venues such as the Kino Cafe, which, prior to the pandemic, hosted the longest-running comedy night in the city.

“Small venues are so important… If you’re able to allow there to be a lot of 50- to 100-person venues that can thrive very cheaply, artists can experiment with a lot of different show ideas and take those to larger venues.”

These “supporting rooms” are most at risk for permanent closure. But they are the artistic spaces that offer comedians a stage to sharpen their craft and “work out material”. Instead of competing with larger venues, such as theatres or a comedy club like Yuk Yuk’s, smaller venues actually support a city’s comedy ecosystem by developing new talent, according to Samuel.

“Ivan Decker didn’t just wake up, go to a comedy club, and the next day he’s on Conan, and then he gets on Netflix. He spent years and years and years working on this and doing it and honing that material in these rooms like the Kino on a Tuesday night with twelve people in the audience.”

The popular improv show, The Sunday Service, which consistently sold out shows at The Fox Cabaret, also started in a small venue where it built up both its audience and its performance.

“If you lose those small rooms, then it’s ‘Goodbye, comedy scene!’”

The crisis exacerbates the tenuous position of comedy venue owners, who largely operate out of a passion for comedy, rather than a reliably profitable business model. A successful restaurant in Vancouver would have little financial incentive to run a regular comedy show.

“Steve Allen at the Kino and Gary Yuill, who owns Yuk Yuk’s, [are] not in this to make a lot of money. They’re passionate about running comedy venues. You can only be passionate for so long. And then if you’re broke, it’s hard to be passionate.”

As restaurants, bars, retail space, fitness studios, and arts and culture spaces face an uncertain future during the pandemic, Samuel points to comedy’s popularity in the city as a key reason why it should receive special attention.

“The comedy scene is what’s already happening. I feel like sometimes Vancouver is trying to force certain things that aren’t happening in the city and they’re ignoring what’s happening organically… How do you help it flourish and don’t impede it? Otherwise, the whole city is going to be Cactus Clubs and Donnelly Group.”

During the crisis, many performers have started online shows to continue to produce content and work on their craft. However, eventually, local comedians will need venues of all sizes to continue their work — venues that Samuel fears may no longer exist once the crisis is over.

“It is a very scary time for sure because there’s just never been a lot of capital or resources put behind the comedy scene in this city.”

Given the existing popularity of live comedy in Vancouver, art spaces of all sizes will be vital to rejuvenating the city’s vibrancy after the pandemic.

“People will need to laugh and get together again.”

Have a listen to the full This is VANCOLOUR podcast with Jacob Samuel: