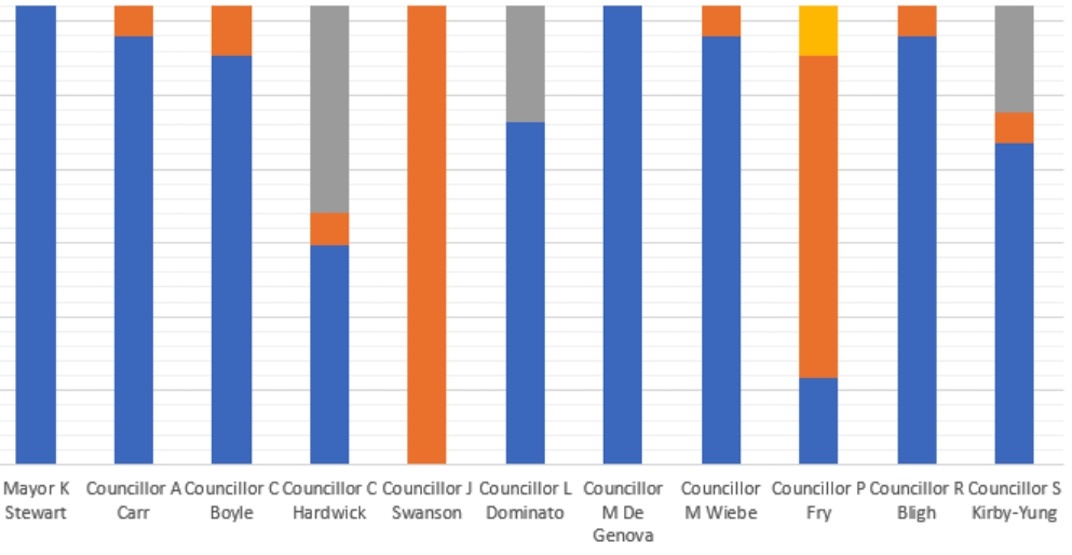 More than halfway through the first year of their four-year term, Vancouver’s new city council has evaluated the applications of eight market rental housing projects with a combined total of over 300 units.

And based on their voting record, many council member’s stances on market rental housing and how they are likely to vote on such projects are now quite apparent.

Mayor Kennedy Stewart and councillor Melissa De Genova have cast votes of approval for every project to date.

Councillors that have voted in favour of nearly all projects include Adriane Carr, Christine Boyle, Michael Wiebe, and Rebecca Bligh.

But on the opposite side of the voting spectrum, councillor Jean Swanson — a self-purported advocate of renters — has voted against every single project that does not directly support individuals with the lowest incomes.

Councillor Pete Fry trails only slightly behind Swanson, with his approval of about 60 units.

And with councillor Colleen Hardwick, she has approved roughly half of the units and has only voted against one market rental housing project, which was the townhouse proposal on 4575 Granville Street in the Shaughnessy neighbourhood. She was absent from voting for three other proposals.

Following last fall’s civic election, it was immediately clear that the new city council would be highly fractured and partisan, but what has been particularly surprising has been the high level of incoordination and divergence within the parties represented — specifically the Green Party and the Non-Partisan Association — compared to public veil of party-lines solidarity during the era of the Vision Vancouver machine.

In recent weeks, there has been increasing criticism over the new city council’s handling of key decisions, particularly on its ability and willingness to effectively tackle housing affordability and supply, particularly after its decision to axe the Shaughnessy townhouse project.