If you haven’t seen this yet, check out the NHL’s overall standings as of this Monday morning: 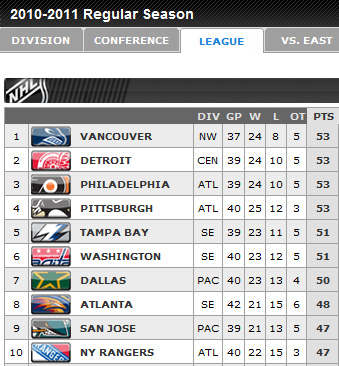 That’s right, Vancouver sits at the very top. They haven’t lost during regulation time in 12 straight games, and they are officially the hottest team in the entire league. As veteran Canucks fans, you all know better than to get your hopes up too high or to get ahead of yourselves in any way… still, it’s alright to show a little pride right now.

The Canucks last played the Sharks on November 26, and they trounced them 6-1. That statement win over a team that had previously enjoyed so much success against them went a long way in turning Vancouver’s season around, which at that point was being described as mediocre.

The Sharks are still one of the better teams in the league, and have won 6 of their last 8 games, and with Vancouver playing their third game in 4 nights, this will be a good test. 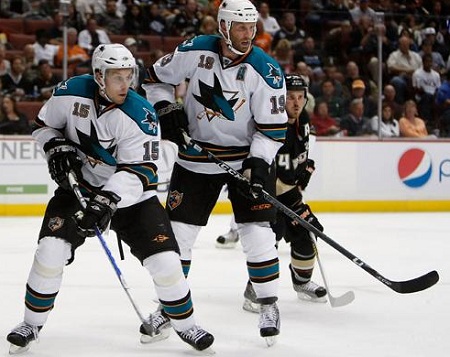 Not that the Canucks could possibly miss him, because he’s a half giant (like Hagrid), but they might want to pay special attention to Joe Thornton, who’s on a 6 game point scoring streak.

Prepare the Red Mile, the Flames have won 4 straight games, and Jarome Iginla has 10 points in his last 10 games!

Back to reality: the team is 18-21 (actually 18-18-3, but who are they fooling?), and they’re second last in the West. In all honesty, this may be the least anticipated game of the week, as even the Oilers offer more excitement. 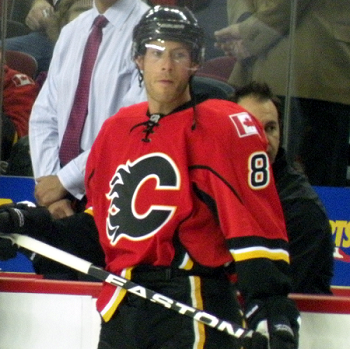 Brendan Morrison will be playing his first game at Rogers Arena for the first time since being cut from the Canucks roster in the pre-season, and he’ll be out to prove something. We hope that he does tally a meaningless point or two during a Canucks win, and we also hope that Canucks fans give him the salute he deserves for his years of service.

Poor Oilers. They’ve won 2 games in their last 11, and the last time they faced the Canucks, they gave up a 2 goal lead to lose in the final minute of the game.

As if the David vs. Goliath matchup wasn’t a tough enough hurdle, little David will be exhausted – the Oilers will be coming into Vancouver having played the Islanders the night before.

Dustin Penner has 5 points in his last 4 games and he’s second on the team in scoring, with 25 points.

As of the writing of this preview, both the Canucks and the Red Wings have 24 wins and 53 points on the season. Their season series is tied at 1-1, with the Wings pulling off a come from behind overtime victory in their last meeting.

With due respect to San Jose and Alberta’s teams (which is not much in the case of the latter), this is the game of the week. Being a Saturday night game, not only will Vancouver fans be watching, the entire country will get a chance to cheer for Canada’s best team as they attempt to chase down the President’s Trophy.

The last time the Canucks and Red Wings played – on December 22 – Pavel Datsyuk broke a bone in his hand. In his absence, Henrik Zetterberg has stepped up, now sitting at 8th in NHL scoring with 44 points, even earning the league’s 2nd star honours for his performance 2 weeks ago. 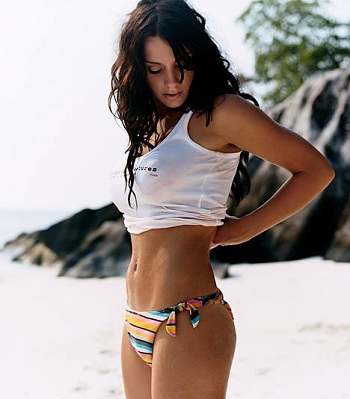 You all know what Henrik looks like, so how about a picture of his wife, Emma Anderson?