How good is the feeling in the Canucks’ dressing room these days? So good that General Manager, Mike Gillis, is writing lighthearted tweets like the one following, and Head Coach Alain Vigneault is humming oldies while sitting next to his boss.

@GMMikeGillis: Sitting on the bus in Long Island beside a 2011 All-Star Coach. Looks like he’s humming the song Carolina In My Mind by James Taylor

Now I implore you Canucks fans, do not be alarmed by the seemingly lackadaisical air being given off by the men in charge. It is quite simply a byproduct of the lack of stress they’re feeling with the knowledge that their team is in a strong position in the league right now.

And with good reason too, the Canucks are the hottest and best team in the NHL, and for as long as they enjoy the view from above, we’re going to gaze at the standings with joy in our hearts: 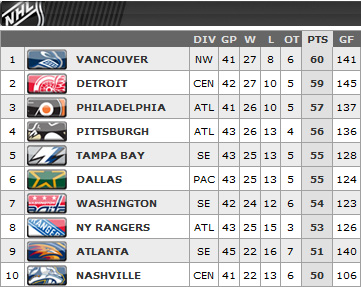 Without further ado, here are this week’s upcoming matchups:

The Islanders are 8-3-1 in their last 12 games, which is a nice little stretch, but ranked 29th in the league and 17 points out of a playoff spot, the only thing they’re accomplishing is screwing up their draft-day positioning.

On Sunday night, Chicago put the Isles in their place, serving them a 5-0 loss, and the Canucks will aim to demoralize them further on Tuesday.

At first glance you may think Isles’ leading scorer John Tavares would be the one to watch, but with a rating of minus-17 on the season, Canucks scorers should be looking to strike when they see him on the ice. So he’s not our pick for who to watch.

It will be interesting to watch Grabner, a Nonis-era first-round draft pick, to see what might’ve been for the Canucks. (he was traded to the Panthers in the deal that brought Vancouver Keith Ballard)

The Rangers have been one of the NHL’s surprise teams so far this season, and on any given night, goaltender Henriq Lundquist can steal a game. The team is 8-2-2 in their past 12 games, which has them ranked in 6th place. In actuality, they’re only 4 points away from leading the Eastern Conference. 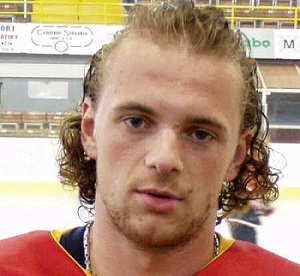 Er, I believe it’s called concealer. What? You’re worried about the connotations!? But your name is Marian!

As has been the case in most of his career, Marian Gaborik has been in and out of the line-up dealing with injuries this season. When he has played, he’s been inconsistent, but Canucks fans know from his days in Minnesota that he’s streaky, and if, god forbid, he hits that hot streak against your team, you might as well just get it over with and let him score.

He just bumped a 3 game point scoring slump, by notching an assist against the Blues, and he may be finding his groove again.

The Capitals have gone 6-0-2 following a stunning 8 game losing streak early in December, and they are right back in the thick of the Eastern Conference’s fight for first, with 54 points (to Philadelphia’s 57) 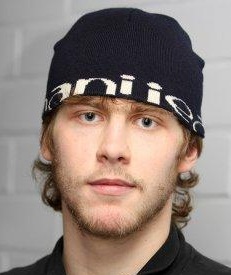 Know what his nickname in Russia is? Unibrow.

Out of the Capitals last 5 games, they have won 4 and lost one in overtime, and goaltender Semyon Varlamov has been on fire. Over that stretch, he has a GAA of 1.2 and a save percentage of 0.962, including one shut-out. Question is, will he be up to the task of shutting down the NHL’s number 2 ranked offense on Friday?

The Wild have won 5 of their last 7 games, yet are currently looking at the playoff spots from the outside. With 47 points, they are tied with LA, who sit in 8th place, and being in such a tight playoff race (there are four teams in the West who currently have 47 points) you know they’ll be hungry to win on Sunday. 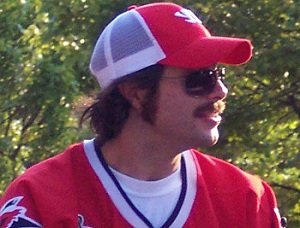 If I could pull off the mullet + ‘stache look as well as Cullen, I’d be living the life of a trucker.

Matt Cullen leads the Wild in 2 special teams stats: powerplay points (14) and shorthanded goals (2). So, with the man advantage or against it, the Canucks might wish to cull “the Cull” from the Minnesota line-up.