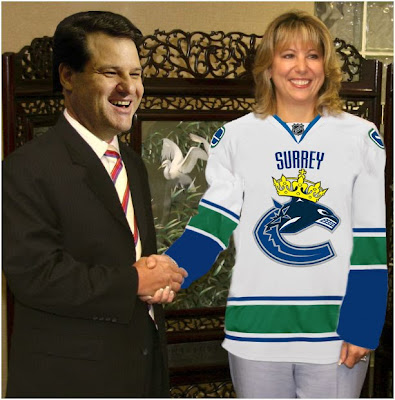 Dianne Watts, with a gleaming smile, came out last night to announce the City of Surrey has officially signed a deal with the Aquilini family to bring the Vancouver Canucks and a LEEDs efficient 30,000-seat stadium to Whalley. “The future lives here!” shouted Watts to a jakked crowd of Ed Hardy wearing citizens.

The Canucks will be renamed the Surrey Kingz, with a ‘z’. The building will be on East Whalley Ring Rd adjacent to the Infinity Towers and King George skytrain station, and will be developed by Jung Development. Also with the development comes a 207-storey tower (one more storey than the Burj Dubai), managed by Berezan Management.

Gordon Campbell plans to convert GM Place to “Caesar’s Place.” There has been no comment from the Liberals but sources say a mega-casino will be announced in 2 weeks… and children may die.

Gregor Robertson sees this as part of the no-fun initiative saying, “we had enough fun during the Olympics, it’s time to move on and roll the die.” Council plans to charge $50 to Aquilini for the farewell party.

Raymond Louie leaked the documents to Vancity Buzz… and also admitted to canceling UFC 115, then he got bitchslapped by Dana White, and reversed.

Aquilini is probably pissed we wrote this.