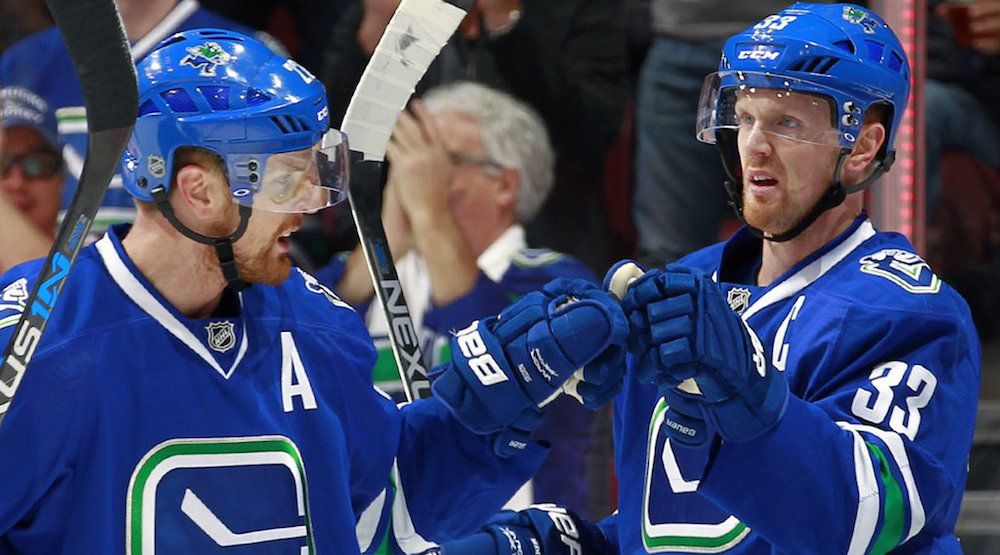 The hockey world was shocked this morning when Henrik and Daniel Sedin of the Vancouver Canucks announced that they would both retire after the end of the season.

After 18 years of playing in the NHL, all with the Canucks, they have only three games left.

Regardless of where the team finishes in standings, whether you’re a Canucks fan or not, there’s no doubt that it’ll be an emotional finish for these two future Hall of Famers.

Hockey sadness at maximum possible. I’ve loved the Sedins since day 1. Great men, wizards on the ice, and all players should forever be measured by them. Period. 2011 was the peak. And that they have no ring is a hockey tragedy. ❤ those two. @Canucks #sedins

This is too sad. I knew the day was coming, but never thought about how soon it could actually be. The Canucks won’t be the same without them. Amazing people inside & out, they will be missed. #Sedins #Canucks 33 22

#Sedins #canucks 22 & 33 will go down as the classiest hockey players to play the game in my opinion. They created a mentality that you can succeed as good people in a rough and tumble game. So much respect for them and happy for their families. ❤🏒🐳

Thank you for everything you have given to this young #Canucks fan over the years. Nobody will ever forget the years of dedication you gave us. I’m just sorry you guys were never able to win that cup you two rightfully deserve.

All the best in retirement. ❤

Thank you for setting an example of how to conduct yourself on and off the ice. All the best. #Sedins #HOF

Kinda bummed about the news out of Vancouver. Those guys have been absolute staples since I started watching Hockey, and I don’t think it’ll be the same without them. #sedins

I can’t stand the Vancouver #Canucks or their fans but I will say I wish the #sedins nothing but the best .. thank you for the great hockey memories and you both are nothing but #Class.. the game will miss ya both

Thank you Daniel and Henrik for all you’ve done for this team and this city. Utter legends, class acts and wow just amazing players. A pleasure to watch #canucks #Sedins

@SatiarShah Just heard about #sedins and my first emotion was happiness for them as people. Not going out on top but going out on their own terms while they can still play #Canucks

I knew this day would come, but I’m not ready for it. #Sedins

#Sedins true professionals, unbelievable hockey players and even greater human beings, they will be sorely missed on and off the ice sad news today #Canucks

Wow. I really didn’t think they would retire yet. In some shock right now….there might be a tear or 2 too.
But very very thankful for everything the #sedins did for the franchise of the #Canucks and the city of #Vancouver . #forevercanucks

I became a #Canucks fan when I was 10, the same year the #Sedins entered the NHL. From the highs of the cup run, to the lows of goaltending controversies… they were first-class the whole way. The constant steady hand. I don’t know this team without them… and I don’t want to.💔 https://t.co/eOfVXgDKFg

Thank you, Henrik and Daniel Sedin. You’ve given so much to Vancouver and called it your home. You’ll always be loved and cared here. Now it’s our turn to give back to you. #canucks #sedins #henrik #daniel

I’ve never been the biggest #Canucks fan but congrats to the Sedin’s on a great career and thank you for everything you did for the City of Vancouver.

I’ve been a huge fan of the #Sedin twins since their draft day. After moving to Ontario, I didn’t get to see the @Canucks play that often anymore, but when I did, I’d always look for Henrik & Daniel, and become a little boy again. You’ll both be missed. #SedinTwins #Vancouver pic.twitter.com/KUm4dp6oX4

As a longtime supporter of this team and a one-time NHL beat reporter (before being swept away to the States) the Sedin brothers were just as much of a joy to work with as they were to report on. Thank you for your contributions to the great city of Vancouver and province of BC. https://t.co/Xd97ugaYSD

It’s going to be very odd waking up to Canucks highlights and not hearing the name Sedin. Being in Vancouver during the 2011 Cup run and the excitement of the 2nd OT win over the Sharks got me into hockey. Now a 5 yr season ticket with my UK team because of the Sedins and Canucks https://t.co/AVyf3WyjCy

Nothing but respect for two of the best players to have ever played the game. The Sedin brothers not only pushed the bar to another level in talent but also in how to be a great human being. Only love for them from the city of Vancouver. #sedins #Canucks pic.twitter.com/zSIa65EfTk

The Sedin twins call it quits.

An honour growing up in Vancouver watching them play. Beyond being extremely talented hockey players, they were an incredibly positive force in the community. Happy retirement, Henrik and Daniel. #Canuckshttps://t.co/4vfM0JcdLe pic.twitter.com/Rp7vjbSQzE

The Sedins’ last home appearance will be on Thursday, April 5 against the Arizona Coyotes. They’ll play their last NHL game on Saturday in Edmonton against the Oilers.